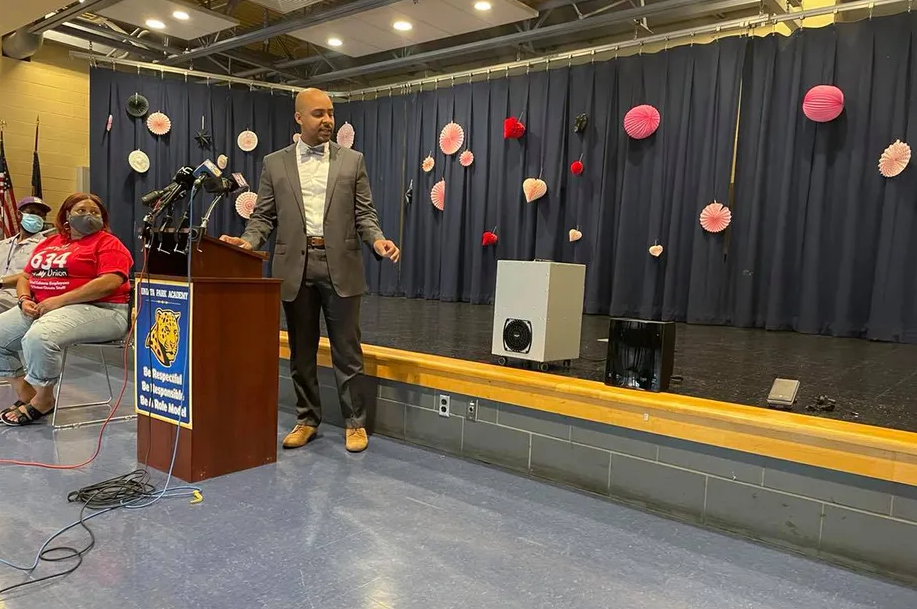 Following a contentious year where Philadelphia teachers threatened to strike over ventilation problems in school buildings, Superintendent William Hite announced Thursday that all classrooms will have air and surface purifiers when school starts in the fall.

The safety of the city’s aging buildings became a key issue earlier this year in the debate about students returning to school for the first time since March 2020. After the district bought 3,000 window fans to improve air circulation, parents and teachers widely criticized the move on social media. Some even suggested that the fans were dangerous.

District officials said Thursday the fans won’t be used anymore. Instead, the district will use $4.5 million in COVID relief money to pay for air and surface purifiers.

“When students return to in-person learning our families, staff and students can be confident that we are taking the necessary steps to prioritize their health and well-being,” Hite said at a press conference at Juniata Park Academy in the lower Northeast. “These air and surface purifiers will be at every school and every instructional space, as well as larger spaces that accommodate people.”

Chief Operating Officer Reggie McNeil said the air purifiers can eliminate 99% of the virus “within three minutes.” A Texas company manufactures the purifiers, using technology “originally developed for NASA,” according to a press release.

Hite also noted that a virtual, asynchronous schooling option will be available for families who are not comfortable with in-person instruction. He said parents will be given the chance to choose that option later this summer.

The superintendent was also joined by union leaders representing the Philadelphia Federation of Teachers, Local 634 and 32BJ SEIU. PFT President Jerry Jordan appeared pleased with the new devices, though teachers were not made aware of them.

“It is going to solve any dispute about the need for ventilation in our school buildings for the children and for the staff,” Jordan said. “It also is something that the parents and the local community will see as another layer of support in mitigating the virus.”

The Centers for Disease Control and Prevention released updated guidance last week for grades kindergarten to 12th, which prioritized the safe return of all students to in-person learning and said vaccinated students and staff members don’t need to wear masks. But district officials said the Pennsylvania Department of Education and the Philadelphia Department of Public Health are currently reviewing the latest guidance, along with local COVID-19 conditions, and will issue any new updated safety guidance to schools soon.

The federal agency is continuing to recommend physical distancing of at least three feet, though if that’s not practically feasible, officials say that shouldn’t get in the way of fully reopening school buildings. Children not yet old enough for the vaccine should wear masks, according to the guidance.

Hite said the district will continue to follow CDC protocol and “will still require face  masks for all entering schools” for in-person learning in the fall.

Teachers protested in February and argued they didn’t want to return until they were convinced the buildings were safe. They said the use of window fans was not enough. School officials, however, defended the fans and stressed the measure was just one of several being taken to mitigate the spread of COVID-19.

About 9,000 students from pre-kindergarten through second grade elected to attend in-person school two days a week starting in March after a third-party mediator determined the city’s schools were safe.

District officials said Thursday that other improvements have been made to aging schools.

“Since last summer, we have removed the equivalent of more than 20 miles of asbestos containing material from our schools,” McNeil said.