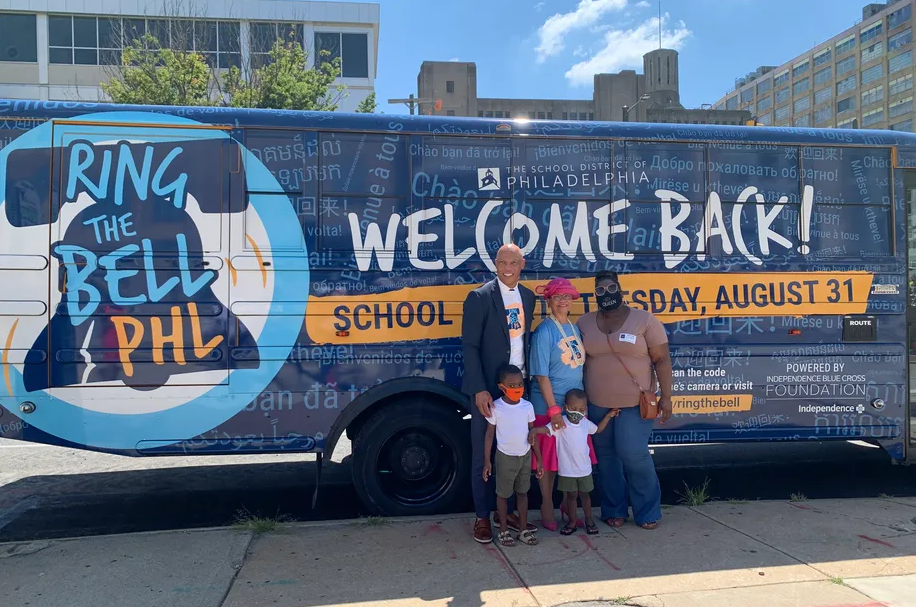 District launching citywide bus tour prior to opening of school

By Dale Mezzacappa .Chalkbeat on August 6, 2021

The School District of Philadelphia is launching a bus tour over the next three weeks through which students and their families can register for school, pick up backpacks full of supplies, and have questions answered about the planned return to full in-person learning for the first time since March 2020.

Two specially decorated buses, with district employees who are being called Street Team Ambassadors, will make 31 stops across the city between Aug. 9 and Aug. 27. At four of the locations, all Shop-Rite stores, students will be able to receive vaccinations that are required for school attendance. Eligible students can also get information about receiving a COVID-19 vaccination.

School is scheduled to start on Aug. 31.

The tour is an effort to build excitement for the reopening of school as well as allay any fears or concerns parents and students have, said Superintendent William Hite at a press conference at school district headquarters. The tour was conceived in response to a survey last spring of parents, who said that they needed better communication from the district regarding basic information about returning to school.

“Some people are a little leery of COVID, as they should be,” Hite said. Officials decided it would be better to go into neighborhoods where people might be less likely to go online or get information through other channels, he said. The Back-to-School buses, he said “will give us the opportunity to meet parents where they are,” adding that information will be available in Spanish and other languages based on the community being visited.

“We’re excited today to help Philadelphia kids and families get back on track for a happy and healthy school year,” said Lorina Marshall-Blake, the foundation’s director.

The first stop will be the Jardel Recreation Center in Northeast Philadelphia at 10 a.m. Aug. 9. The vaccinations will be available on Aug. 8, Aug. 10, Aug. 18 and Aug. 24, each at a different Shop-Rite located in the city.

Despite concerns about new start times for schools, Hite said that they will not be significantly changed at this point. The new schedule calls for three different start times — 7:30 a.m., 8:15 a.m. and 9:00 a.m., which has been criticized by some teachers and parents, especially since most high schools are starting earlier and elementary schools later. Ten Philadelphia state legislators sent a letter to Hite questioning the new schedule and are set to meet with him next week.

Hite added that all schools that need them will have expanded before- and after-school care.

Arrangements for starting or expanding such programs are being worked out by each school individually, he said, and paid for with federal COVID funds. Pennsylvania’s plan was approved Thursday by the U.S. Department of Education.

“Resources are being provided to all schools,” Hite said. He said some schools might utilize “community resources,” while others might create new programs and pay staff members overtime.

Hite said that the district is still considering whether to mandate that all staff members be vaccinated against COVID-19, calling it a “complex” issue. He reiterated that all staff members, vaccinated or not, will be required to wear masks, and that all adults will be tested weekly. Children will be tested if they are symptomatic. Students participating in contact sports and in activities like band and choir will be tested once or twice a week. They can opt out of testing if they show proof of vaccination.

Parents have until Aug. 13 to sign up for the district’s fully online option, the Philadelphia Virtual Academy, which will be expanded from grades 6-12 to include students in kindergarten through fifth grade. He did not have information about how many parents are choosing this option.

After kindergarten enrollment plummeted last year, more students have registered for it this year, he said. The district is working on finding students in all grades “who are still in the community and should be attending schools…It will take awhile to re-engage all the individuals who were lost.”