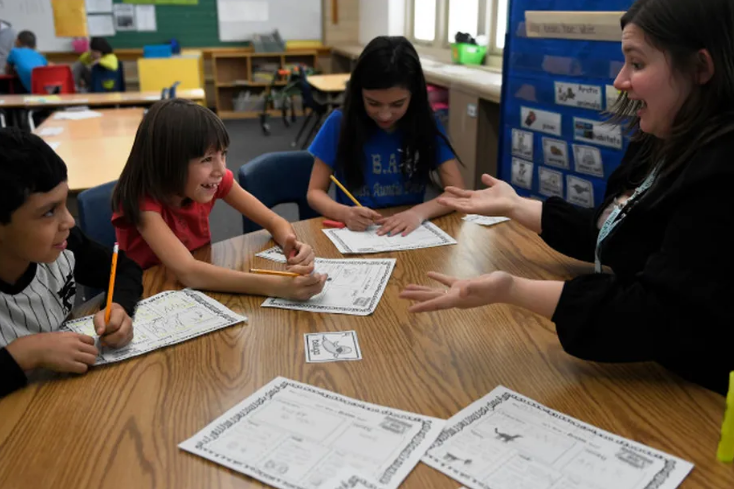 Denver’s elementary enrollment is falling. Could school consolidation be next?

In the past six years, Denver Public Schools has lost about 5,000 elementary-aged students, district data shows. That’s the equivalent of 16 schools’ worth of kids.

The decline has hit the western and north-central regions of the city especially hard. At a school board meeting last week, the district said it plans to spend next year talking to families about how to solve the problem of too few students and too many schools.

Officials sketched out a timeline: a year of community engagement followed by a school board vote next May. Schools would have a year to plan for changes, which would happen in fall 2023.

But details are scarce. The district has not yet said how many or which schools will be affected, though three schools got a heads-up of sorts when the district assigned them interim principals for next year, citing low enrollment and the need to identify “the best path forward.” But the district hasn’t said what that path will be. Could schools be closed? Consolidated?

“There are no preconceived notions of how this process will go,” Ericka Burns, a manager in the district office that oversees autonomous schools and choice, told a west Denver neighborhood group recently. “My goal in this is that the community is heard and part of this process.”

That hasn’t historically been the case, especially when it comes to school closures in Denver.

“One of the things that continually happens with DPS is that a lot of these decisions happen in and around the community but rarely with input from the community,” said Manuel Aragon, a Denver Public Schools graduate who worked in the district for many years and is now a parent at an elementary school where enrollment is shrinking. “They tend to come to the community at step 12 or 13 when they’re close to deciding what to do.”

District officials promised this time will be different.

“Whatever is to come next,” school board member Brad Laurvick told the west Denver neighborhood group, will be “something the community looks at and says, ‘We had a place in making this and creating this and being a part of it.’ That has to anchor everything.”

Denver Public Schools was once the fastest-growing urban school district in the country. But several years ago, enrollment began to plateau. While middle and high school enrollment held steady or even grew, elementary enrollment began to fall. District officials pointed to declining birth rates and rising housing prices pushing families out of the city. Neighboring school districts including Aurora and Jeffco face similar challenges.

Declining enrollment is a problem because Denver schools are funded per student — and fewer students means less money to hire staff. Schools with fewer than 300 students struggle to maintain robust programs with mental health counselors, art, music, and gym teachers, gifted and talented programming, and services for students whose first language is not English.

Small schools often must combine grade levels into a single classroom: kindergarten and first graders sharing a teacher, for instance. When schools don’t combine grade levels, too few students can lead to big class sizes. Thirty-two third graders is a lot for a single classroom but maybe not enough that schools can afford to hire a second teacher to split the group into two.

And the problem of small schools in Denver is growing. The COVID-19 pandemic has exacerbated the district’s enrollment losses. For the first time in a long time, enrollment declined at most levels this year as families found alternatives to the public schools.

To solve the problem, the district is taking a regional approach. Rather than close individual schools that are under-enrolled, officials hope to gather feedback from families and educators at schools in regions that have collectively lost enrollment over time. The hope is that the people in these “school groupings,” as the district is calling them, will come up with their own solutions, which a district presentation says “may result in school consolidations.”

Colfax Elementary School in northwest Denver will likely be part of one of the groupings. Five years ago, Colfax had 319 students. This year, it has just 248, according to the yearly student count that happens at every Colorado school in October.

Colfax was one of three Denver elementary schools, along with Fairview in northwest Denver and Schmitt in southwest Denver, whose families got letters in February saying their school was getting an interim principal next year. The letter says the schools are under-enrolled and explains that an interim principal will be in place as the district works to find a solution.

“This will allow us additional time next school year to identify the best path forward,” it says.

The letter set off alarm bells for some parents and teachers and Colfax. They wondered: Is the district going to close our school? Why are we getting an interim principal?

“To us, that was like, ‘Does that mean we have one year to stay afloat?’” said Ann Franco, a Colfax teacher who has taught in Denver Public Schools for 31 years, including at another elementary school that closed. “It still leaves us with a lot of unanswered questions.”

The community attempted to get answers last month at a virtual meeting of the West Colfax Association of Neighbors. The group invited school and city officials to talk about gentrification, housing instability, and declining school enrollment in the area. Families told the officials how their school has embraced and supported them in ways that go beyond academics.

A significant number of homeless families live in shelters and temporary housing in West Colfax. The neighborhood is also undergoing the kind of development that demolishes older single-family homes in favor of pricey new townhomes for people without children.

Brenda Rivas said she kept her two children enrolled at Colfax Elementary even after housing prices pushed her out of the neighborhood. Ayiesha Tyler told the officials how Colfax teachers checked on her family every day when they were displaced from their apartment by a fire.

“Colfax has always felt more like a home than just a regular elementary school,” Tyler said.

The parents and community members at the meeting wanted to know how Denver Public Schools would decide which schools to consolidate and if families would have a say. Laurvick, who represents northwest Denver on the school board, repeatedly said they would.

“I know there’s also a need for real dialogue around this, like in the old-fashioned sense of sitting in a room together and sitting there until all the questions get asked and we really dig into things together,” he said. “And I believe that time is coming for us to do that.”

But despite his many assurances, some community members still feel worried. Shantelle Mulliniks, co-president of the neighborhood group and a Colfax Elementary parent, said it’s unnerving knowing that change is coming, but not knowing what it will be.

“While it’s encouraging to know that community engagement is the priority and where we’re headed,” she said, “there’s sort of this waiting limbo period that really doesn’t feel good.”

This article was originally posted on Denver’s elementary enrollment is falling. Could school consolidation be next?