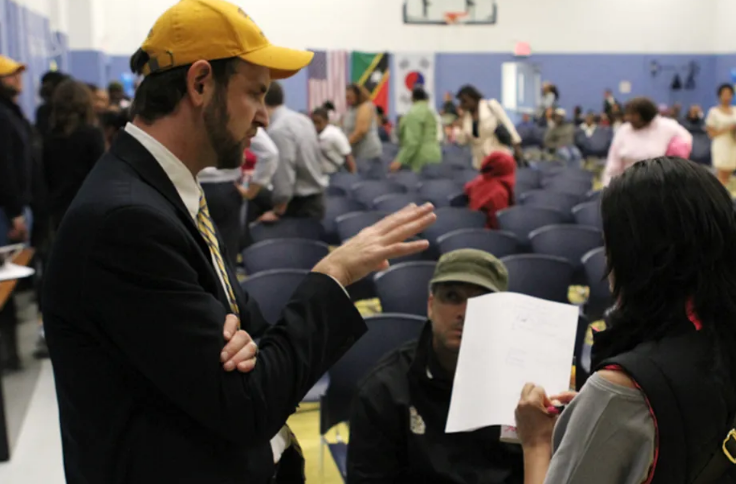 The New York charter community was reeling Tuesday amid revelations that the influential founder of Democracy Prep charter network was charged with stealing more than $200,000 from the schools he helped create.

Seth Andrew, a key figure in the rise of charter schools in New York who went on to work as an education adviser to the Obama administration, was charged with wire fraud, money laundering, and making false statements to a financial institution. He was released on $500,000 bail, and his attorney told reporters that his client would plead not guilty.

Prosecutors accused Andrew of stealing the funds in an attempt to get a favorable mortgage on a $2.4 million Manhattan apartment. Neither Andrew nor his attorney could be reached for comment.

Though Andrew left day-to-day work at Democracy Prep in 2013, the complaint says he maintained some financial connections to the network for years. Current leadership at Democracy Prep expressed sadness over the allegations and tried to assure families that financial safeguards have since been put in place.

“His alleged actions are a profound betrayal of all that we stand for and to you and your children, the scholars and families we serve,” Democracy Prep CEO Natasha Trivers wrote in a letter to families.

The allegations against a central player in the education-reform world shocked observers, with text messages flying between some leaders at charter networks across the city.

“If it’s true, it’s sad, it’s a tragedy, but I’m really glad that the school seems to have discovered it quickly,” said James Merriman, CEO of the New York City Charter School Center.

According to prosecutors, Andrew stole money from escrow accounts that charter schools are required to keep by the state. The accounts, containing public funds, are to be used in the event of the schools dissolving.

Andrew allegedly funneled the money through accounts of a sister non-profit group called Democracy Builders, according to the criminal complaint, which included surveillance footage of Andrew wearing his signature yellow cap. Prosecutors said he then put the funds in accounts he controlled to secure a lower interest rate on a $2.37 million apartment he and his wife purchased in 2019.

Trivers, who has been CEO of Democracy Prep since 2019, stressed that the crimes didn’t put any of the network’s 6,500 students at risk.

The alleged theft was first noted in public documents over a year ago, in a report prepared by the SUNY Charter Schools Institute, a spokesperson for the institute confirmed.

“Recently, a network contractor discovered a theft of approximately $142,000 in two of the education corporations dissolution reserve fund bank accounts during the 2018-19 fiscal year,” the February 2020 report said. “The auditor deemed these amounts to be uncollectible and wrote them off in the financial statements.”

The incident, the report says, points to a need for better financial oversight: “A cash theft from inactive bank accounts went undetected for months during 2018-19.” The SUNY spokesperson, Michael Lesczinski, said Tuesday that the network “has put in place strict financial oversight and compliance measures, including regular third-party financial review, to strengthen its standing.”

Democracy Prep said in its email to families that it promptly took action. “Upon learning of the unauthorized withdrawals, Democracy Prep alerted the appropriate authorities,” wrote Trivers.

A graduate of the Bronx High School of Science who taught briefly, Andrew launched the flagship Democracy Prep middle school in 2006. By 2012, Democracy Prep operated three middle schools and a high school. Over the next several years, the network expanded to Camden, New Jersey; Washington, D.C.; Las Vegas; Baton Rouge; and San Antonio, though the D.C. school later closed.

After leaving Democracy Prep in 2013, Andrew took a job at the Obama education department and then became a senior adviser to the chief technology officer at the White House. (The DOJ complaint notes that while working for the federal government, Andrew’s salary continued to be paid by Democracy Prep, in an arrangement that allows an outside employer to pay for a government salary. He did not entirely sever ties from the network until January 2017, the complaint says.)

Andrew also cofounded Washington Leadership Academy, a D.C.-based charter school that netted a $10 million “super school” prize from the Emerson Collective. (Emerson is a funder of Chalkbeat through the Silicon Valley Community Foundation.)

Most recently, Andrew cofounded another venture, Degrees of Freedom, which is affiliated with Democracy Builders and aims to revamp the college-going experience for low-income students of color, with a particular focus on charter school graduates. The group purchased a college campus in Vermont earlier this year.

“A central theme to what I’m trying to do in this project and my whole career is break down monopolies and cartels that don’t want innovation and new ideas because that’s what hurts the most disenfranchised communities the most,” he said on a podcast last year.

Steve Zimmerman, the interim director of a charter school in Queens and former director of the city’s Coalition of Community Charter Schools, said he had been impressed with Democracy Prep and Andrew “had good ideas.”

Zimmerman said he did not anticipate the allegations would have a substantial impact on the charter sector, which has faced political headwinds in recent years. Charters have fallen out of favor among Democrats nationally and pro-charter advocates in Albany have failed to raise the cap on the number of schools that can open in New York City, which was reached in 2019.

“There are so many other things happening out there that kind of augur poorly for charter schools going forward, I’m not sure this is going to matter all that much,” Zimmerman said.

Last year, after an anonymous, self-described group of alumni, parents, and former and current staff raised concerns about what they viewed as racist aspects of Democracy Prep’s culture and Andrew’s leadership, he wrote a lengthy response.

He acknowledged a number of mistakes, including “a system of inside-out shirts to ostracize students for poor behavior” and “policies of walking in straight lines and remaining silent in hallways and some meals.”

“To the students who felt like these actions were similar to the inherently racist criminal justice system, your feelings are valid,” he wrote, referring to the latter policies.

But he also defended the network’s approach. “Upon reflection, I would make different decisions on how to ensure school safety today,” he wrote in a since-deleted Medium post. “But, do I regret building a school that was physically safe for our students? Not one bit.”

There were also recent signs that Andrew’s relationship with the charter network he founded had frayed. Last year, Trivers penned a letter to the Boston Globe in response to an article describing Andrew’s latest venture.