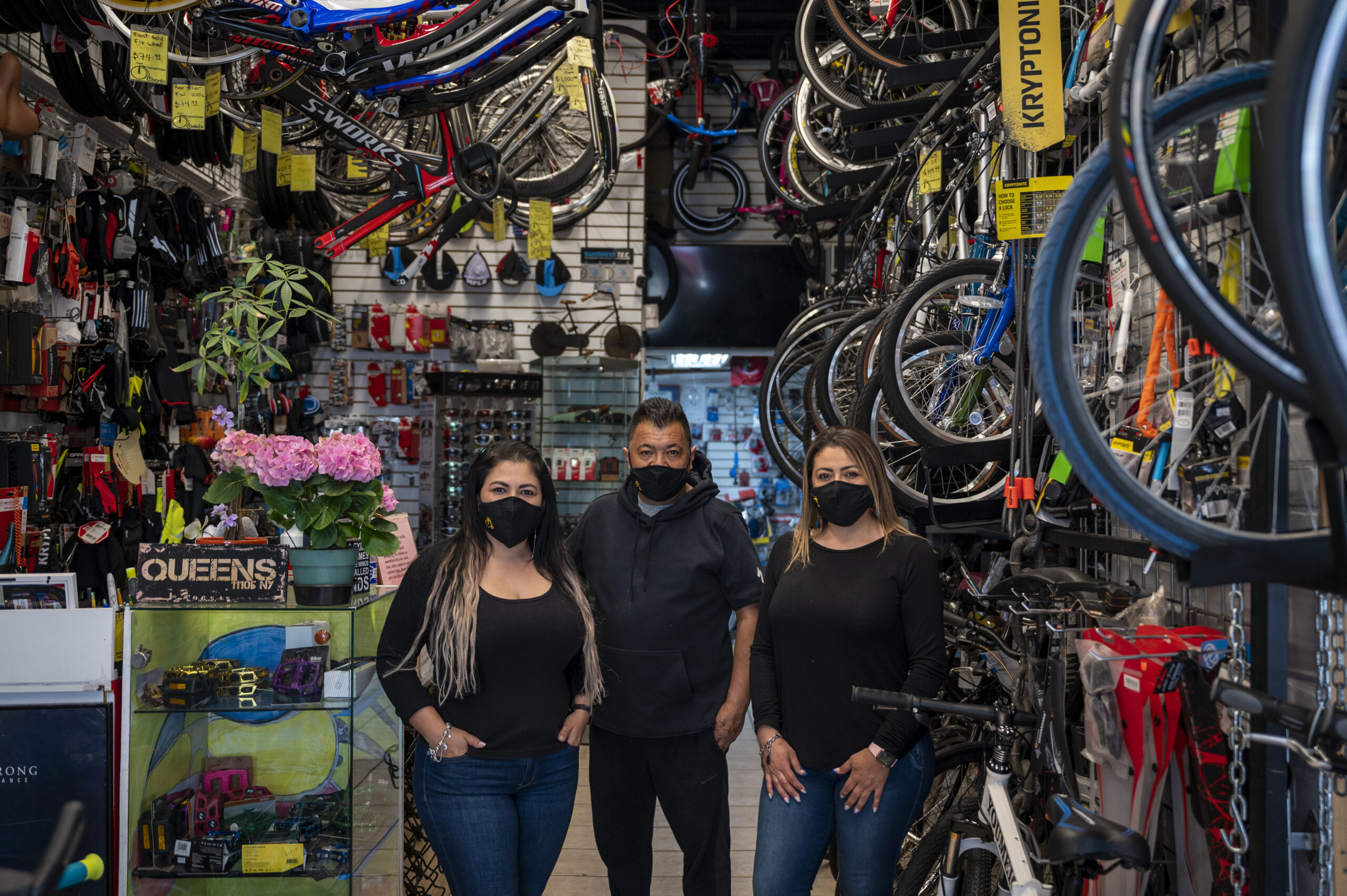 Leidy Jimenez and her family are a classic New York City success story — and a portrait of COVID’s toll on immigrants at a time when fewer are investing their hopes in the five boroughs.

She ran a bike shop in Astoria with her “perfect team” — her sister and parents — for nearly two decades. Jimenez’s parents left Bogota, Colombia, for New York City in 1990, and later brought the rest of the family over.

Now, Jimenez is a homeowner with two children.

The perfect team, however, lost a member last April to COVID-19: Jimenez’s mother, Beatriz Soler. “She was so healthy. We didn’t see it coming,” said Jimenez. Her mother was 62.

The remaining three work harder than before even though they can’t sell many bikes due to lack of inventory and are surviving on repair services.

“Since my mom left, my dad is there seven days,” Jimenez said. “The bike shop is basically what kept us going.”

Immigrants like Jimenez have long been the backbone of the city’s economy. Foreign-born New Yorkers make up 43% of the workforce and own nearly half of the city’s small business, employing a half million workers, city data and research show.

“There are no other cities in the country for which immigration is more central,” said Van Tran, a sociology professor at the Graduate Center at City University of New York.

But the pandemic has disproportionately taken the lives and livelihoods of immigrant New Yorkers. Until recently, there’s been little government aid for undocumented workers.

The bottom line: The number of foreign-born New Yorkers isn’t growing, as fewer immigrants make their way to the city, government data shows.

The number of foreign-born green card or visa-holding New Yorkers declined 16% to 1.2 million people between 2009 and 2019, the latest available data shows.

Meanwhile, a program in which family members sponsor relatives to immigrate last year recorded its lowest number of petitions from New York regional offices since 2016, according to the U.S. Customs and Immigration Service (USCIS). That program accounts for two-thirds of all legal immigration nationwide.

Ramón Guerra, an immigration attorney in Long Island City, said the dampened demand reflects “residual effects of having an administration that basically beat down immigrants for the last four years” — referring to the policies and rhetoric of former President Donald Trump.

With the arrival of President Joe Biden in January, the landscape has begun to change.

The Biden administration has reinstated protective status for immigrants from certain countries in crisis. It also rescinded the so-called public charge rule that disqualified immigrants who received public assistance from gaining permanent status.

And it ended an information-sharing agreement between the Office of Refugee Resettlement and U.S. Immigration and Customs Enforcement, which had led to arrests and deportation of relatives of unaccompanied minors.

But the pandemic has introduced delays and sowed confusion for those hoping to settle in New York.

Those seeking asylum were already facing big backlogs in the courts that hear their petitions, with just 83 cases granted in September 2019 out of 45,000 pending applications, the latest available numbers. It’s estimated that thousands more applicants are headed to the New York area to await their hearings after Biden canceled a Trump program that forced asylum-seekers to wait in Mexico regardless of their country of origin.

Since last October, at least 361 unaccompanied minors have relocated to live with extended families or other sponsors in New York City — while 19,000 young people arrived at the U.S.-Mexico border in March alone.

“In the beginning of the pandemic, it was difficult for people to meet in person to get personal consultations. The service centers for USCIS were all closed. The courts were all closed,” said Guerra. “I’m sure this will increase the backlog.”

The current timeframe for family-sponsored immigration ranges from one to 3.5 years, according to USCIS.

For some visa holders, their petition to migrate has been approved after a long wait but they are unable to enter due to travel restrictions. The USCIS has not announced a clear directive for those whose visas expired during the height of the pandemic.

“There’s not a lot of clear answers,” said Shuping Den, a supervisor for immigration legal services that Chinese-American Planning Council provides under the state’s Office for New Americans.

Some are reconsidering their plans to become U.S. citizens altogether.

Den said the string of hate crimes and harassment incidents against Asian Americans have her clients worried. “They wonder, if it gets worse, do they really want their family to have a life here?”

Immigration scholars say increased awareness and mobilization will bring about reforms and signal to the rest of the world that the U.S. is working to fix its problem. For instance: The Biden administration in March pledged improved tracking and reporting of anti-Asian hate crimes by the FBI and local law-enforcement agencies in response to the rising violence.

“The principle of equity, and democracy and the process of democratic deliberation is extremely appealing to many, many Asians and non-Asians from around the world,” said Tran.

Meanwhile, foreign-born New Yorkers are bracing for a bumpy recovery.

Policy think tanks estimate there are 359,000 undocumented immigrants citywide. Five times as many foreign-born naturalized citizens live in the city, totaling 1.7 million, alongside another 1.3 million foreign-born visa and green card holders, according to the U.S. Census Bureau’s 2019 estimates.

A recent study from the Center for New York City Affairs at the New School shows foreign-born workers held 49% of all private jobs but account for 54% of the jobs lost in the pandemic. Nearly one in six jobs lost due to the pandemic was held by an undocumented worker.

At the height of the pandemic, half of immigrants became unemployed.

The unprecedented health and economic hardship left immigrants, particularly those without legal status, vulnerable. Before the recently passed $ 2.1 billion state relief fund for so-called excluded workers, many immigrants had to rely on mutual aid and community groups for basic goods and services.

“A lot of people stepped up because the government didn’t,” said Jaime Weisberg, a senior analyst for the Association for Neighborhood and Housing Development.

As previously reported by THE CITY, neighborhoods with a high share of immigrants, such as Corona and Sunset Park, received forgivable PPP loans at a lower rate than other neighborhoods.

Some worry structural barriers immigrant business owners and workers faced in accessing the federal loan program could be repeated in distribution of the state’s relief funds.

In addition, many immigrant workers and business owners lack the capital to run a traditional brick-and-mortar business and instead operate on streets or food trucks and form worker co-ops. Advocates say the city’s regulations and other red tape are prohibitive, with not enough licenses to go around.

Jorge Morales immigrated to New York City from Ecuador in the 1980s, drove a cab, ran a food truck for 30 years outside of LaGuardia Airport and owned a house in Jackson Heights. Morales died of COVID-19 on last March. He was 65.

His wife, Maggie Morales, plans to continue to work the food truck — but in the Hudson Valley where their son, Danny Morales, currently lives. Danny Morales said that in the city, operating costs to keep up with licenses and parking fees are too large while business is slow.

“It doesn’t make sense economically for the food truck to exist in the city anymore,” he added.