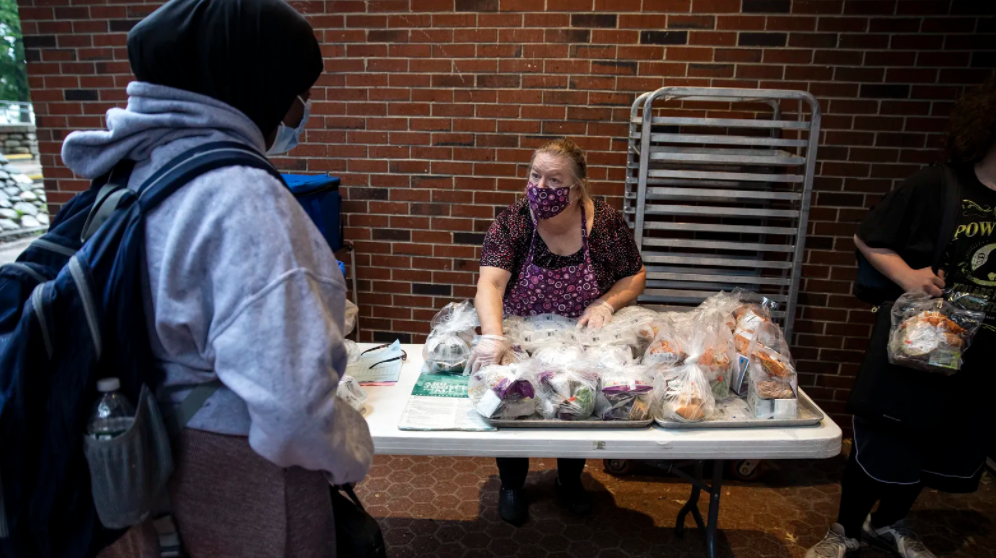 One evening last week, the call came from a Cincinnati mother of five school-aged kids. Unable to find an apartment that would take her subsidized rental voucher, she had bounced between motels and shelters since May. But on this night, the shelters were full, and the family didn’t have money for a hotel. They’d been sleeping in her truck and needed help.

Beach quickly dispatched a colleague, who checked the family into a hotel for a few nights.

“It was something we never did before the pandemic,” said Beach, who oversees the school district’s team that supports Cincinnati students experiencing homelessness, who numbered 2,300 the year the pandemic began. “We didn’t used to have this level of desperation.”

To address that growing need, Beach is using new federal funding to hire a full-time staffer who will help students and their families find housing. Beach has also been using that money to bring mobile clinics to hotels, where homeless families are staying. Clinic staff make sure students struggling to see get free glasses, and they’ve started screening students for depression, too.

“If basic needs aren’t being met,” Beach said, “our kids are not in a position to learn.”

Congress set aside $800 million in COVID relief money back in March for exactly this kind of help. The first $200 million reached states within six weeks, and Education Secretary Miguel Cardona urged state officials to deploy that aid quickly to meet the needs of homeless students. Many states, including Ohio, passed money along to schools over the summer.

But in several states, most schools are still waiting to see the first dollar of these funds due to red tape and a lack of urgency from state lawmakers or officials, according to a Chalkbeat investigation.

Those states include New York, Florida, and Missouri, which serve some of the nation’s largest numbers of homeless students, as well as Kentucky, West Virginia, Mississippi, Nebraska, Wyoming, and South Dakota. Together, they enroll one of every four homeless students in the country.

And while school staff in these states are working hard to help homeless students in the meantime, some say they could have done more if the funds came sooner.

“We just kept waiting and waiting,” said Debra Albo-Steiger, who spent nine years as the point person for students experiencing homelessness in Miami-Dade schools until she left the district in August. She left behind a long list of ideas for how the money could be spent. “There was some type of bureaucracy — I don’t know what it was — that interfered with it coming out faster.”

Delays and bureaucracy kept aid from schools this fall

U.S. schools are getting nearly $130 billion from the latest COVID relief package. They can spend some of that to help homeless students. But the money earmarked just for them matters for a few reasons.

For one, federal officials cleared schools to use this money in ways they can’t spend other funds. Schools are allowed to buy grocery store gift cards or cover a few nights in a motel for families in need, for instance.

The money is also designed to meet the particular needs of homeless students at an especially dire time. Eviction moratoriums have ended, and in some places, more teens are living on their own after their parents died of COVID or other illnesses. Situations in which families are living together “doubled up” have been especially tense — something as small as a sneezing child can lead a family to be displaced over health concerns, as one school staffer in Kentucky saw recently.

At the same time, school staff say it’s becoming harder to help families find housing as rents rise. And for schools that lost touch with homeless students during the pandemic, reconnecting with them requires staff and time.

But seven months after Cardona urged states to get this money out the door, at least $29 million is caught in bureaucratic limbo, according to a review of all 50 state plans and interviews with education officials.

Barbara Duffield, who heads SchoolHouse Connection, a nonprofit that advocates on behalf of homeless youth, said she understood that it can take time for education officials to thoughtfully plan to spend a new source of federal funds. But she worries some states haven’t prioritized getting this money into schools’ hands.

“Like with all of the relief funds, both the homeless dollars and the others, there is the tension between: Use it strategically to transform systems, and ‘reimagine’ schools… and at the same time there is the now, now, now,” Duffield said. “The thing that’s frustrating is when there’s pointless bureaucracy that gets in the way, or when it just doesn’t rise to the level of priority. Those are the two things that I feel are inexcusable.”

Federal education officials say they’ve been sending a clear message to states for months. “The Department urges states to use these resources quickly and appropriately,” an education department spokesperson said in an email.

In some cases, state choices held up this aid

States’ decisions about who should qualify for the extra dollars also affected how quickly the funds reached students.

Back in April, Cardona urged states to send most of the first chunk of money to school districts that already get federal grants to support homeless students. Federal officials reasoned that these districts were in the best position to spend the funds well and quickly, since they typically served lots of homeless students and knew the relevant rules.

Ohio took that approach, allowing districts like Columbus City schools to run more summer programs for homeless students, including one that taught science and math lessons at an urban farm within walking distance of a local shelter.

Colorado did something similar, getting many districts their money by June. “We were ready to act,” state officials there said in an email. In suburban Denver, that meant Adams 12 Five Star Schools could pay to staff their program that supports homeless families over the summer, when it would normally be closed.

“Families appreciated that we weren’t going away because their challenges and struggles weren’t going away just because it was summer,” said Leigh Her-Moua, the district’s point person for supporting students experiencing homelessness.

Other states asked districts to compete for these funds. That didn’t always result in extensive delays, and some states said a competitive process allowed them to accurately distribute the new money to districts with changing needs.

“As a rural state, Vermont’s population of students and families experiencing homelessness is often highly mobile,” that state’s education officials wrote in their plan. “The movements of a handful of families can represent a meaningful change to the need for resources available to schools.” Vermont distributed the first round of aid in September.

In some states though, a competition has dragged out the process.

In West Virginia, state education officials chose to run a competition after deciding the 11 districts that already get money to help homeless students had enough to work with.

The education department couldn’t accept applications until state lawmakers signed off on the funds in late October. The state now expects to give some winning districts their money in early December, and stands behind its choice.

“This decision did not hamper any LEA from meeting the immediate educational needs of students experiencing homelessness,” state officials said in an email, referring to local education agencies, which typically are school districts.

Other states have echoed that point, noting schools had other federal funds that could be used to help homeless students and that the new funding could be used to cover previous expenses when it arrives.

“To our knowledge, no school superintendent has reached out to the department to express concerns with our timeline, or indicated that their district is in dire need of these funds immediately,” Ochs, the Florida spokesperson, said in an email. “To suggest that districts are left paralyzed to act, or that they do not have funding to serve students, is false.”

But schools can be hesitant to spend money that’s not theirs yet. School staff who did have quick access to these funds said that made it easier to run programs continuously, hire staff, and pay outside organizations for help.

In one state where schools haven’t gotten this aid, a school staffer has had to hold off on buying a vehicle to take homeless children to school.

“If there is anything else we need to do on our end, please let me know; otherwise, we will remain patiently waiting,” the staffer wrote to state officials.

What the wait means for students and schools

In Broward County, Florida, which enrolled some 5,100 homeless students the year the pandemic began, school staff are brainstorming how they might put the new funding to work when it arrives.

One is driving students to school if they have been staying in a hotel for a few nights and the district can’t quickly re-route a bus. They’re also looking at setting up a voucher system at local grocery stores for families in need of food.

“If we had the funds in the summer, we would have moved toward some of the things that we’re speaking about right now,” said Carole Mitchell, who oversees the district’s program that helps students experiencing homelessness. “We are a bit behind the eight ball.”

Laura Tucker, who supports the 4,800 students experiencing homelessness in Florida’s Hillsborough County’s schools, understands the state needed some time to come up with a plan. But it was apparent other states got this money out much more quickly when she attended a recent national conference for school staff who support homeless youth.

“We were very jealous of the people who are already spending their money and serving families,” said Tucker, who would like to use the money to train additional staff and add “manpower” to find homeless students. “We can’t really gear up yet.”

The year the pandemic began, her district served more than 4,900 homeless students, but that number dropped to just under 4,000 last school year. If she’d had these funds sooner, she said, she could have paid additional staff to “find our homeless students faster.”

“I know that the kids are out there,” Danger-Mercaderes said. “The longer we stay disconnected, the longer they disengage from education.”

This article was originally posted on Congress set aside $800 million to help homeless students. Months later, many schools are still waiting for aid.