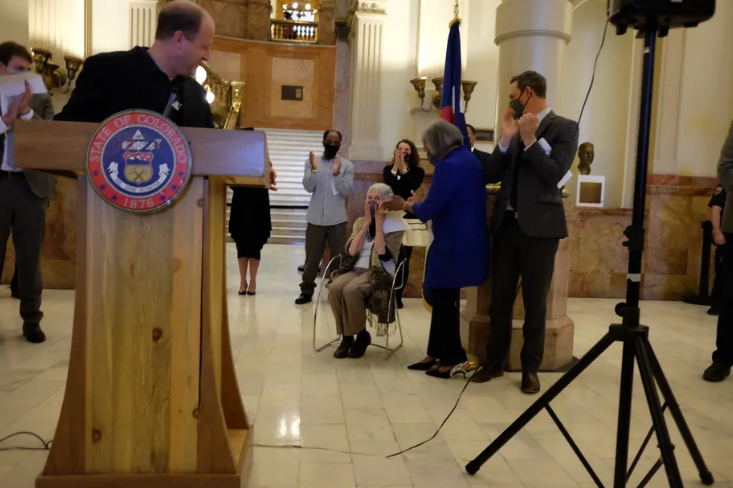 Colorado would establish a stand-alone state department dedicated to early childhood programs and start developing a plan for universal free preschool in 2023 under a bill introduced Wednesday.

Gov. Jared Polis, who has made preschool one of his top priorities, announced the initiative at a press conference flanked by Democratic legislative leaders and longtime early childhood advocates, including Anna Jo Haynes, whose name will grace the legislation.

A major expansion of publicly funded preschool in Colorado is possible because voters approved a new nicotine tax in 2020 through Proposition EE. Starting in 2023, money from the tax will be used to make a minimum of 10 hours a week of preschool available to all Colorado children in the year before they enter kindergarten.

Children in low-income families and those who face other barriers to school readiness would have access to additional programming.

The balance between providing some benefit to all children and greater support for children with certain risk factors is one of many issues that still need to be worked out. Exactly what Colorado’s preschool offerings would look like will be determined through an extended public input process laid out in the bill.

The Colorado Early Childhood Leadership Commission, an advisory group, unanimously recommended the creation of the stand-alone agency last month. On Wednesday, Haynes said it represents the culmination of years of advocacy and activism that started back in 1975. She recalled bringing preschool workers to the Capitol to ask for a raise, flustering the sergeant at arms, and setting babies on lawmakers’ desks.

“This is the best thing that has happened to me, other than my children,” Haynes said at a press conference announcing the preschool plan.

The bill has three main elements. It would create the new Colorado Department of Early Childhood. It would kick off a community process to create a plan for the transition to the new department, including identifying ways to reduce regulation and duplication and better align early childhood programs with the K-12 school system. It would require the development of a plan to implement the preschool program envisioned under Proposition EE.

Funding for the transition would be included in the 2022 budget.

Lawmakers spoke of their own struggles to find high-quality affordable child care, even as people with resources to navigate the system, and said they hope the system works better for Colorado families going forward.

“For far too long, access to early childhood education has been limited to those who can afford it,” state Sen. Janet Buckner of Aurora said. “All parents should be confident that their children are safe and can realize their full potential.”

Diane Price, who runs the Early Connections Learning Centers in Colorado Springs, said the creation of the new department provides an opportunity to elevate ongoing conversations about early childhood teacher qualifications, standards, pay, funding, hours of operation and many other issues critical to the care of young children.

Under the current system, providers have to weave together funding from a mix of federal, state, and local dollars, as well as parent tuition, Price said, and each program has its own eligibility requirements, reporting deadlines, and other requirements.

As just one example, when families who use Colorado Preschool Program-funded positions move from one school district to another, those dollars often don’t follow them to a new program, Price said. While federal programs like Head Start will continue to have their own requirements, Price hopes a new state system will be easier for providers and parents alike to navigate.

“When you think about the fragmentation, how we try to blend dollars, braid dollars, rope dollars together to create a comprehensive system, to create an affordable system, it’s virtually impossible when you have some of these barriers,” Price said. “This will give us an opportunity to think about how to reduce these barriers and align these programs to better deliver services to children and families.”