Home » Coaxing NYC students back to classrooms: wins and struggles at one Bronx high school 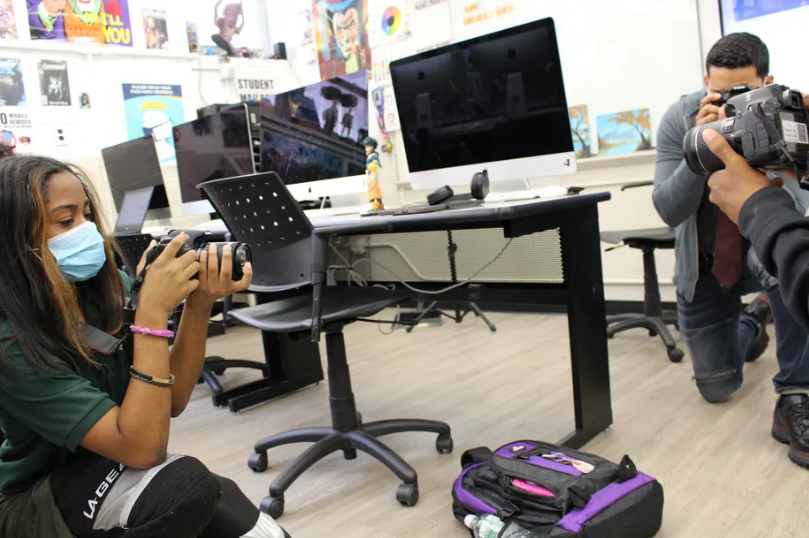 Coaxing NYC students back to classrooms: wins and struggles at one Bronx high school

When New York City high schools reopen on Monday for the first time in four months, the hallways at Alfred E. Smith Career and Technical High School will not be as crowded as they usually are. But they will be more bustling than many other city high schools.

In a typical year, Smith welcomes just under 500 students to its long, squat brick building, just off the Third Avenue and 149th Street stop on the 2 and 5 subway lines in the South Bronx. Next week, more than 40% of students are expected to come back.

That’s about double the citywide percentage of high schoolers expected to return to in-person learning, as the country’s largest school district struggles to convince students to come back to buildings as the coronavirus pandemic drags on.

Much of the credit goes to the school’s extraordinary amount of communication with worried parents, as well as the collaboration and trust with families and among teachers, according to people in the Smith community. The school, which has a career focus on automotive technology and graphic design, was able to create a schedule approaching a normal school day, complete with live teaching and socially distanced students moving from class to class. That’s in contrast to many high schools across the five boroughs where students show up to campuses only to sit with laptops and watch lessons streamed by teachers who are not in the room with them.

“If the kids would have walked in, and I said, ‘OK. You’re going to sit in Room 109 for the next six hours, and we’re going to bring you lunch to your classroom,’ they would have stopped coming,” said Principal Evan Schwartz. “They saw their teacher face to face when they came to the building. That was the difference. It’s not rocket science.”

As New York City tries to open school buildings for more students, Smith holds important lessons about what that takes — and why it’s so hard. Some of the elements that have helped coax more students into classrooms aren’t easily replicated in other schools. Smith bucked union guidance against teaching remote and in-person students at the same time, and had few teachers staying home with medical accommodations. A hands-on career training model that is difficult to shift online also motivated students to return.

Even with all that going for the school, fewer than half will be back in classrooms.

New York City’s chaotic push to reopen schools has shown that simply because buildings are open does not mean students will come. Concerns about the coronavirus still run high. Many parents lack confidence that their children’s schools have the resources to keep everyone safe — despite the many precautions such as mask-wearing and ventilation upgrades, and growing evidence that transmission within schools is low. For working families, the abbreviated in-school schedule was too much to juggle, along with unpredictable school closures triggered by positive cases on campus.

In all, 70% of New York City children have chosen to stay home and learn remotely. The figure is even higher for high school students, with only 20% expected to return to classrooms next week. Black and Asian families, especially, have decided to keep their children home.

‘Stepped out on faith’

Since the start of the pandemic, Smith has been surrounded by sickness and death. In the 10451 ZIP code where the campus is located, 1 in every 11 residents was diagnosed with COVID-19. One out of every 267 residents in the neighborhood died. That rate is higher than the Bronx as a whole — a borough itself that has suffered more loss than the rest of the city.

Schwartz had to convince parents that their children would be safe learning in classrooms. He took every opportunity he had to tell them so, in virtual town halls and daily emails. The week before schools were set to reopen for the second time, about 25 parents logged into a schoolwide meeting — with translation provided in English and Spanish — to ask mostly logistical questions, such as what time students were expected to report to school and which days they would be on campus.

Before buildings opened in September, Schwartz was honest about what he didn’t know: Would kids keep their masks on? Would they ignore social distancing rules and hang out in the hallways? (He was relieved to learn, once the building did reopen, that students were good about both.)

Schwartz tried his best to explain his plan for fending off the virus, by staggering transition times between classes to avoid crowded hallways, and creating zones within the school to limit potential exposure to the virus. He said he didn’t try to convince parents one way or another, but if they asked for an opinion, he was honest in his answer.

“We felt this had to be a family decision. This had to be on them,” he said. “But if it did come down to it, where they were like, ‘You tell me,’ we wanted kids to come back.”

Nicole Peay was wary about sending her sophomore back into the building. Peay is invested in the school, serving on the leadership team and parent association. But the Bronx resident also lives in constant fear of the virus. For much of the pandemic, she has only seen her mother on video calls despite living nearby.

Her son, tired of the monotony of Zoom, was eager to be back in school. Peay thought back to the beginning of his freshman year, when she watched her son, who had come from a restrictive special education program exclusively for children with disabilities, confidently walk the hallways. She remembered how, to her delighted surprise, a school safety officer relayed that her son, who has autism, had even made some friends. Plus, he was enthralled with the graphic design program, where has learned to print T-shirts and gets other hands-on experience with the school’s specialized equipment. So she signed him up for in-person learning and put her trust in the school’s leaders, including Rosa Arroyo, the school’s assistant principal of operations.

“A lot of the kids feel the sense of community and that people care about them, and once you get a child to see that you do care and you’re invested, they want to be a part of that,” Peay said. “I just stepped out on faith, just knowing that Principal Schwartz and Ms. Arroyo were going to do everything so it would be safe.”

The logistics were some of the hardest puzzles for the administration to solve. In the era of social distancing, high school poses a particular challenge. Students travel from class to class, creating more possibilities to be exposed to the virus. Not every student takes the same courses, so grouping students together can be impossible. Staffing is another hurdle. Teachers who are at high risk for complications with the virus can receive an accommodation to work remotely, which raises the question: If there’s only one chemistry teacher, and she isn’t coming into the building because she has an accommodation, who will lead the classroom?

Many schools resorted to teaching remotely even when students are in the building. Students sit in the same classroom all day while their teachers appear on screen. The model made sense in terms of  limiting students’ exposure and solving the staffing problem. It also had another significant advantage: It eases the transition to virtual instruction when positive cases among students or staff force a campus closure, which happens often.

The result for students, though, is underwhelming. When schools reopened in the fall, many quickly felt like they’d rather stay home if they were going to learn remotely regardless.

Smith was able to take a different approach with the support of its teachers.

Against the guidance of the teachers union, many educators have decided to livestream their lessons,  which allows them to teach the students in front of them while also reaching those at home. They embraced livestreaming after seeing it in action, said ninth-grade earth science teacher Nicholas Saffioti.

The setup is tricky — it takes a desktop computer, a laptop, and a smart board — and it requires a whole new set of classroom rules and expectations. Once Saffioti figured it out, he invited other teachers to watch. For those who were interested in trying it themselves, he also went to their classrooms to help them set up the technology.

As a peer collaborative teacher, Saffioti said that his colleagues at Smith are used to this kind of coaching, class visits, and collaboration to improve their practice. With livestreaming, they could see how students in the classroom and those at home could answer each other’s questions and engage in meaningful conversation. And while it’s complicated and often taxing, he felt the arrangement ultimately requires less planning and other legwork than creating two versions of school — in-person and online.

“It made things feel more normal. It made the classroom feel like a classroom,” he said. “Every teacher, really, who saw this happen agreed it was the best way to go about doing what we were trying to do, which is finding the best way to support students.”

There were other elements working in Smith’s favor. Few teachers had accommodations to stay home, so more could be in the building providing live instruction. To fill the gaps for those who were fully remote, Schwartz paid for substitutes using money from field trips and other expenses made moot by the pandemic. As a career and technical education school, there was no shortage of technology to make livestreaming work, since most classrooms are outfitted with smartboards and there were enough laptops to go around.

Smith’s unique programming may be another factor in why more students were willing to come back than elsewhere in the city. In addition to the graphic design lab, which features a 3-D printer, students can graduate with certifications in automotive technology and collision repair. In the mechanic shop, students get their hands dirty replacing damaged car parts, repairing engines, and welding — all of which is particularly hard to learn from a computer.

“I think that hands-on experience, that was what got the kids in,” Schwartz said. “How do you learn how to operate a wheel alignment online?”

Schwartz is not sure who will show up to the building this time around. A few more students have decided to stay home. Each family’s reason is different. Some students have taken on jobs to help their parents pay the rent. Others are helping to take care of their siblings, who are also learning online. Families remain worried about health risks, with some concerned about the commute on packed buses. Even Peay, the mother who sent her sophomore back to the building, said she would have thought twice about it, if it weren’t for the fact that she has to work outside the home.

With fewer students expected in the building, the school will be able to offer in-person instruction for three days a week, including on Fridays, when the campus is open to anyone who wants to be in the building.

Schwartz hopes his students will show up. The more steps schools can take towards normalcy — the more they can show families and students what’s possible — the better the chances he sees of a successful reopening next school year.

“We want to get as many kids in the school, as safely as possible, that want to be in the school,” he said. “The more that you do now that resembles an actual school structure, the easier and more effective it will be in September.”

This article was originally posted on Coaxing NYC students back to classrooms: wins and struggles at one Bronx high school