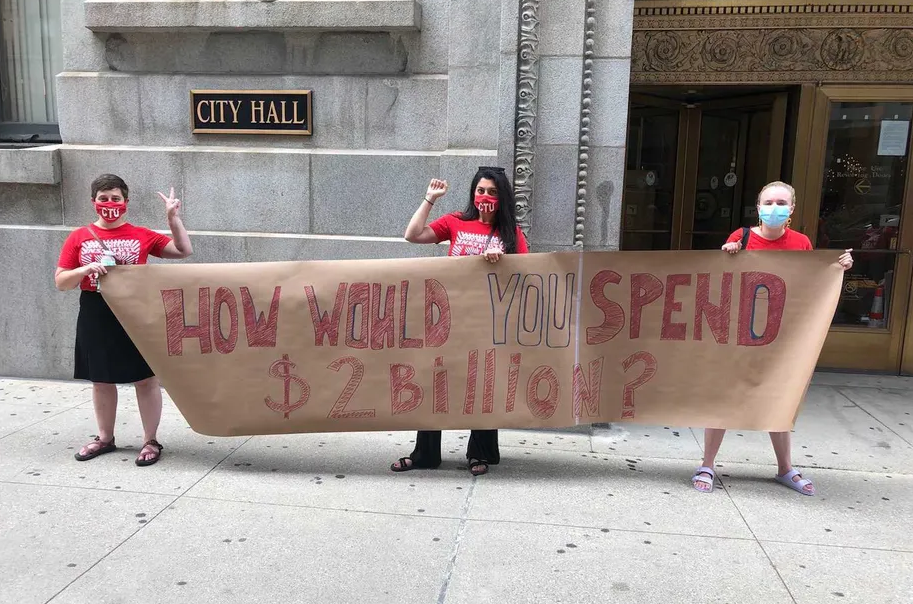 Mike Smith’s classroom was nearly empty when he returned to in-person teaching last spring at Englewood STEM High School. Of the 200 or so students who opted to learn inside the building, only about 25 were showing up each week.

Among them was a young man who was there one day, then gone the next — the victim of six gunshot wounds. The young man survived and came back to campus by the end of the year on crutches.

Smith said that student was on his mind last week when he testified at a series of school board hearings for a $9.3 billion budget for schools. The school board will vote on the budget Wednesday, but Smith and some other educators aren’t satisfied with the proposed amount. After subtracting the costs of long-term debt payments, teachers’ pensions, building maintenance and repairs, centrally managed staff and programs, and districtwide COVID response, schools will see $4.4 billion of this amount next year — which amounts to about $1,370 more per student compared with the previous year.

In public hearings last week, educators argued that the district should spend more on student support personnel, such as counselors. They’d like to see the board delay a vote and revise the budget to route more money to staff and to provide schools with more building-level support for students dealing with trauma.

Smith lost four students to gun violence in 2020 alone. According to a Chicago Sun-Times analysis, children in Chicago are dying from gun violence at a rate three times higher this year than last year. The twin traumas of the COVID-19 pandemic and the city’s escalating gun violence make learning an uphill battle for students at Smith’s school.

The student who was shot is recovering and taking summer classes to make up for lost learning time. But some days, he still finds it hard to engage. He’s not alone — Smith said when teachers ask students how they’re doing, they’ll often respond, “Not today. I’m not in the mood.”

“How can a kid like this learn when there are so many outside things going on?” Smith said.

To make schools safer, Smith and other educators say they don’t want funding for police in schools. Instead, they want more nurses, counselors, librarians, books, housing support, teacher assistants, restorative justice coordinators, and other staff and programs that support student health in a holistic way.

“If we don’t address those needs that go beyond the classroom, classrooms are going to remain empty,” Smith said. “[Bringing students back to school] goes beyond hand sanitizer.”

School board members have said that pandemic recovery will span more than one year — the district’s Moving Forward Together plan is projected to cost more than $525 million across this school year and the next — and that some emergency spending will spill into the 2022-23 school year. What’s more, the district is limited in how much it can spend on long-term personnel and their benefits. So Chicago Public Schools can’t easily use it for long-term solutions, such as hiring staff, board member Elizabeth Todd-Breland said at the hearings.

“I hope that this can also be a moment where we come together as a community to galvanize and push for those structural solutions that are really going to be long-term,” Todd-Breland said. Among the solutions she listed was more sustained state funding through the evidence-based funding formula; currently, Chicago is only funded at 66% of the target amount set by the formula.

Meanwhile, the school board is slated to vote Wednesday to once again give district leaders the authority to take pandemic-related actions and spend up to $150 million without board preapproval. The board first took a similar step as the pandemic hit in March 2020, allowing the district to spend up to $75 million without prior board vetting. Officials had argued that amid the crisis, they needed the flexibility to act fast to buy anything from protective equipment to computers and other technology for remote learning.

Across three federal emergency spending packages, Chicago Public Schools will receive about $2.6 billion. It has accounted for $1.8 billion of that, with $800 million spent on remote learning and reopening schools last school year, and another $1 billion factored into this upcoming school year’s budget. That money will go to address:

In public testimony last week, educators and some parents argued for more spending on facilities improvements, from air quality upgrades to accessibility measures. They also pressed the district for more details. According to the union, 300 schools need air quality upgrades; district officials say that while work to improve air quality will touch every campus, only 17 schools are specifically scheduled to receive major upgrades this year.

“In some schools, the windows still don’t open,” Chicago Teachers’ Union member Dulce Arroyo said. “[Board members] had the nerve to make it sound like, ‘Well, you know, only 17 schools that are receiving air quality repairs because those are really expensive repairs.’ It’s like, well yeah, they’re expensive because you continue to sweep it under the rug.”

Some parents have taken the opportunity to lobby for improvements to their own campuses or to revive the long-running question about how the district decides how much money to send to each school. That process, known as student-based budgeting, has long been criticized as inequitable, and while the district has moved away from strictly adhering to that process in recent years with such programs as its “equity grants” for shrinking schools, enrollment still largely determines funding.

That bothers Chicago parent Angel Alvarez, who works as a researcher at Northwestern University and has conducted his own analysis of how the district makes budget decisions.

Giving schools a set amount of money per student, he argues, is ineffective: “That’s like saying, ‘I’m going to solve hunger in Chicago by giving everyone a sandwich.’ It’s a stupid idea. Not everyone needs a sandwich … and those who need it should get more than one.”

Alvarez says, as the district seeks to reduce its achievement gap, it should institute a system that more effectively rewards schools that demonstrate academic gains and establishes more productive accountability measures for schools that don’t — measures that help students and aren’t bound up in central administration.

“Making the principal and the teachers do more paperwork might be okay,” Alvarez said. “But that’s not really accountability, if a child still isn’t getting the resources they need.”

Students would be better served with investments in libraries, counselors, and teachers, Alvarez said. They need more direct support.

This article was originally posted on Citing student trauma from violence and pandemic, Chicago educators call for school budget redo