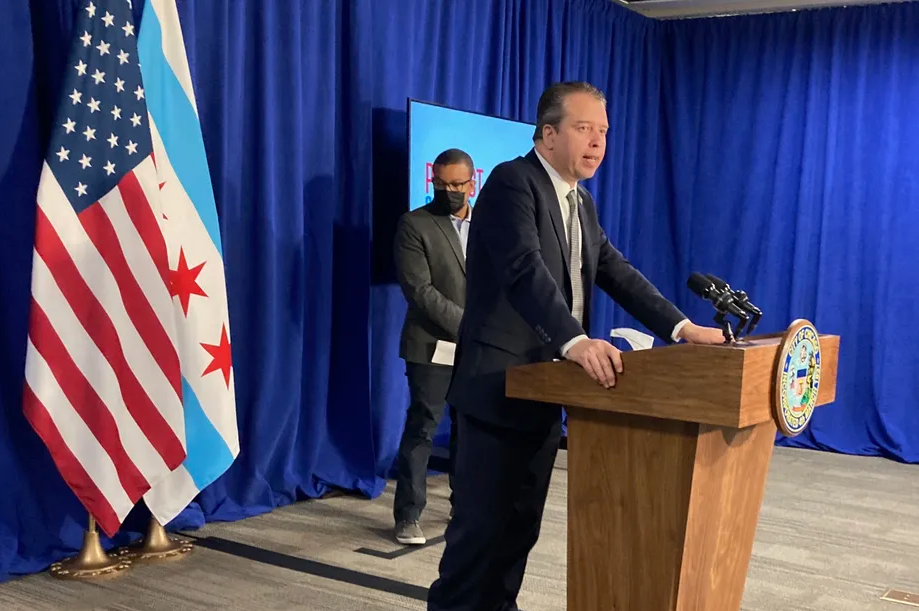 By Mila Koumpilova Chalkbeat on October 1, 2021

Taking the microphone for the first time as CEO, amid calls for Chicago Public Schools to step up its safety game, Pedro Martinez promised more transparency and ramped-up testing.

After two delays, Chicago Public Schools says it will make its deadline to roll out COVID-19 screening testing at every campus this week and will, for the first time, publicly disclose a running tally of children in quarantine, Arwady said. As of Thursday, 6,322 children were quarantined, according to the updated dashboard.

Martinez, in only his second day on the job, pledged more consistent updates and public disclosure of COVID-19 cases. “Every week we have to be accountable to you,” said Martinez, the former San Antonio superintendent who, in his former district, made national news by defying a Texas ban on universal masking and COVID vaccination mandates.

The Chicago Teachers Union and some parents had decried a delay in fully rolling out a COVID surveillance testing program and in beefing up the district’s contact tracing operation.

Timed to the start of the press conference, Chicago Public Schools on Thursday unveiled a dashboard update in a bid to provide timelier data. The district will, for the first time, publicly tally self-reported COVID cases among students and staff in addition to the new disclosures around quarantine numbers. Prior to now, the district only publicly disclosed cases confirmed by contact tracers — an approach many parents and the city’s teachers union said resulted in considerable undercounts of active cases.

“The numbers may change but for transparency, we felt it was important to put all the actionable cases — including the ones that the Chicago Department of Health heard about and the ones CPS heard about,” Arwady said Thursday. That includes reporting from tests taken at-home by families.

Still, in an overarching message to parents and the community, Martinez and Arwady argued forcefully that Chicago’s public schools are safe, with COVID cases in line with broader community numbers and no outbreaks so far, defined as five or more related cases. The reopening of district schools has not triggered an uptick in childhood coronavirus cases in the city.

“As a father and CEO, I will not allow our children not to be in a safe space,” Martinez said after mentioning that his two children, who both have asthma, will start as students in the district soon.

Said Arwady, “I want to reassure you that the procedures and protections Chicago Public Schools has in place are working.”

The district also said it now has more 30 contact tracers and about 30 additional staff members who were reassigned to help in that role, still shy of the roughly 80-member contact tracing team officials have promised by later this fall. Meanwhile, only a tiny fraction of families have so far opted into voluntary COVID testing for their children, and Martinez called on more parents to sign consent forms.

The city’s pledge for more transparency around COVID-19 cases comes just as Martinez starts the job with the district’s safety rules under the microscope. Martinez on Wednesday met with Randi Weingarten, the head of the country’s largest educator union, who was in town to back the Chicago Teachers Union demand for reaching a written school reopening agreement.

The union has pointed to the case of Jensen Elementary, on the city’s West Side, where recently 10 out of 17 classrooms were quarantined, and family members have said the mothers of two students died of complications related to the coronavirus. Arwady told reporters earlier this week that her department’s investigation of one of those deaths has not so far found evidence of ties to in-school transmission of the virus.

Some families have been calling for an expanded virtual option since before the school year’s start, saying they just did not feel comfortable to send their unvaccinated children to campuses as the delta variant caused a late summer spike in cases. A small group of parents organized to keep their students at home and challenge the district to allow them remote access.

But on Thursday, Martinez seemed reluctant to open up the district’s virtual option, now open only for medically fragile students, to more families. He spoke about the academic and mental health damage he had seen among San Antonio students after remote learning last year. And he said he would need to ensure the district has the capacity to ensure high-quality virtual learning.

The district had twice pushed its deadline for having weekly testing of all employees and students whose families consented to the nasal swabs. Thursday was its latest deadline, with a last-minute scramble to line up a testing vendor and conduct background checks for its staff. More recently, after an outcry over the Jensen cases, officials announced that they will also bring in Lurie Children’s Hospital to conduct additional testing at schools with five or more confirmed COVID cases.

Chicago Teachers Union leaders and Weingarten, the American Federation of Teachers President, on Wednesday called for the district to bolster safety measures, including COVID-19 testing. At a press conference outside of Englewood STEM High School, CTU President Jesse Sharkey said the safety measures that were missing at Jensen were missing across most of the district.

The union wanted to see an “enforceable agreement” with the district that would set up “guard rails” to protect students, teachers and families, Sharkey said.

“Jensen was a school where you had 60 percent of the students out and two parent deaths, and they have not paused that school,” he said. “We want an assurance from the district about when they are going to say it’s time to clean this school, it’s time to test everybody, it’s time to make sure the environment is safe.”

Criteria for closing entire school buildings have been a stumbling block in lengthy negotiations between the union and the district; district leaders have said flipping entire buildings to remote learning would disrupt learning for many students who are not exposed to the virus.

Arwardy said again on Thursday that her department’s investigation has found no link between the Jensen cases and a parent’s death there, saying tests of quarantined students had come up negative. Martinez said that he is eager to sign an agreement with the union, but that he has strong concerns about some of its demands, including for social distancing of 6 feet.

“It’s not realistic and, frankly, it’s not aligned with the science,” he said.

The union said Martinez had mischaracterized their proposal, which more recently has called for 3 feet of social distancing.