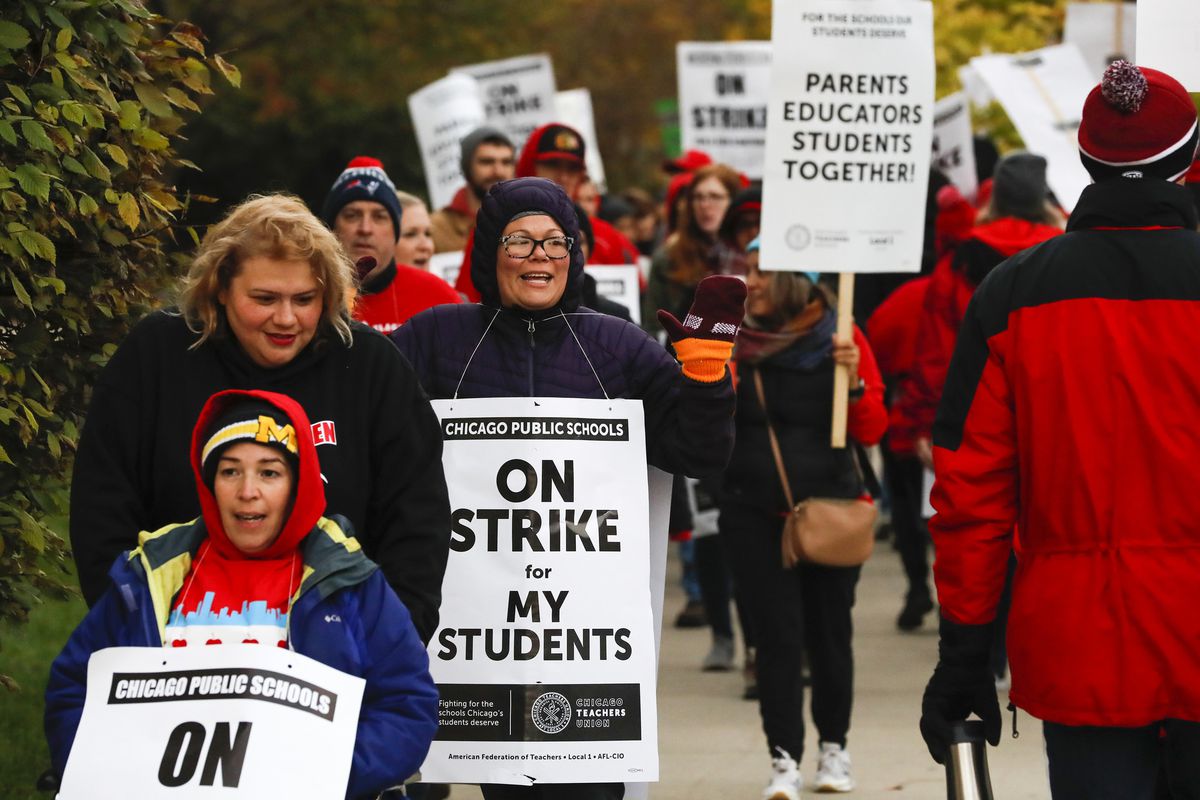 Three months into the new school year, the Chicago Teachers Union says the $535 million in federal COVID relief funds promised to schools still isn’t reaching high-need campuses on the South and West Side.

As evidence, the union pointed to Frazier Elementary in North Lawndale, where the school librarian has become a substitute teacher and the principal has taken over an algebra class amid a substitute shortage.

A union call for more federal pandemic relief spending on additional staffing has been one of the key sticking points in negotiations over a fall reopening agreement with the district that still remains elusive.

District leaders and school board members have pointed out that their pandemic recovery plan for the coming two years includes millions of dollars for new special education teachers, counselors, and other positions. But they have stressed that investing significant resources into new hiring will set the district up for a painful and disruptive fiscal cliff when the federal funding expires.

The district is leaning more heavily on community-based organizations, mental health providers, and other outside groups to provide after-school, mental health, and other services. At its Wednesday board meeting, for instance, the board approved $45 million worth of contracts over three years with 91 vendors to provide these types of services.

Schools across the country are confronting staffing shortages in critical areas, from classroom teachers to bus drivers and cafeteria workers. Some of the shortages predated the pandemic, but COVID-19 has exacerbated the problem. Experts say the infusion of federal emergency cash may complicate matters, since more schools are hiring and competing against each other for staff.

Outside Chicago Public School headquarters on Wednesday, union president Jesse Sharkey said the staffing shortages at Frazier and other schools show that district leaders and Mayor Lori Lightfoot have failed to live up to their promises of directly supporting students and their families with COVID-19 relief funds. At Englewood STEM High School, staffers are scrambling since nine educators are out with COVID-19, Sharkey said, and substitutes are in high demand.

Over the summer, the city launched “Moving Forward Together.” The two-year plan promises to use $535 million of the $2.6 billion federal COVID relief funds to address the academic and mental health impact from the ongoing pandemic.

In a statement, Chicago Public Schools said that it recognized the critical importance of equitable funding and resources for all schools, especially those that serve Black and Latino students from low-income households.

The district said it is investing federal funds in addressing unfinished learning and supporting students’ social and emotional needs. This past spring, it rolled out a $24 million plan to expand care teams for students’ behavioral health at every school over the next three years. The district said in a statement it is also investing more in programming to help students with disabilities, including doubling the capacity of its summer offerings.

As for the educators’ complaints about cleanliness, a spokesperson for the district said it is working with school communities to determine the best course of action but that improving school facilities and ensuring a safe and sanitary learning environment was a “priority.”

At the monthly school board meeting Wednesday, CEO Pedro Martinez acknowledged complaints about cleaning problems with some schools and said his team won’t shy away from accountability. There had been some improvements, Martinez said, asking board members to keep in mind there are over 600 schools in the district.

The district continued to make progress, completing a deep cleaning on Friday and planning additional deep cleaning during the Thanksgiving weekend, Martinez said.

He asked community members not to generalize this issue for the entire district based on one school.

Frazier teacher Sandra Ochoa said this week the school was in dire need of a nurse, a psychologist, a case manager, a technology coordinator, a tutor, and more mental health support resources.

“Our community is in a crisis,” Ochoa said. “Our students need stability.”

During a press conference at Frazier Tuesday, educators underscored the need for more staffing.

Tolu Solola, a science teacher, said the school — which offers the prestigious International Baccalaureate program — has had five IB coordinators in six years, and educator turnover overall is high.

“We have a crisis that has been ignored for far too long,” she said. “The teachers as well as the students and parents have had enough.”

Solola broke down when she spoke about students having to adjust to a new teacher or a substitute after mid-year educator departures.

“I’m tired of telling my students it’s not their fault their teachers leave,” she said.

Parents and educators at other schools described similar frustrations on Wednesday. Cortney Ritsema, who serves on the Local School Council at Goudy Elementary, said that families are on three-month wait lists for mental health services provided by an outside organization connected to the school. The wait is even longer, she said, for families seeking services in languages other than English.

Teacher Caroline Rutherford said the same issues at neighborhood schools were being experienced at the charter level at Acero Marquez.

“We are missing the same resources,” Rutherford said. “The biggest resource we need is staffing.”

The school needs counselors, social workers, and academic interventionists, Rutherford said. “Our students need more adult attention and they are not getting it.”