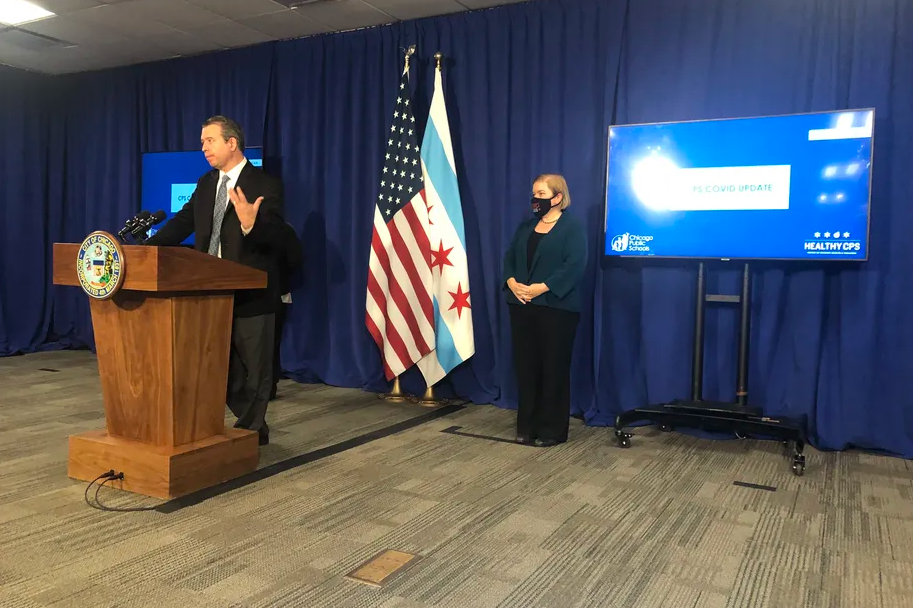 Chicago’s decision to revisit quarantine rules comes as a pediatric vaccine nears federal approval and cities such as New York and Philadelphia pull back on quarantine rules in an effort to fulfill promises of in-person learning for most children.

“We hear families worrying schools are not safe,” said Martinez, explaining the change at a Tuesday press conference. “We also hear the other side, with parents saying, ‘My child has been quarantined. What do I need to do to get my child back in school?’”

Officials said the change comes as a timeline for a pediatric vaccine comes into focus. The city’s public health commissioner, Dr. Allison Arwady, said Tuesday morning that the latest forecast for pediatric vaccine availability in Chicago is the first week of November. Timelines could shift, but she said she is optimistic that children ages 5-11 will soon be eligible.

Currently, only children ages 12 and over are eligible for the COVID-19 vaccine, which has complicated return-to-school plans and quarantine rules.

Chicago currently requires unvaccinated students to quarantine for 14 days after known exposure to a close contact, such as a teacher or classmate. Within the first days of students returning this fall for in-person learning, quarantine notices began going out. District and health department officials said a relatively small percentage of students have been quarantined overall — as of Sept. 25, that number was 15,000, or about 4%, officials said last week — and they’ve pointed out that an even smaller percentage of those students tested positive for COVID.

Other situations can trigger quarantines, such as travel to a state on Chicago’s travel advisory list.

School districts across the country have confronted the tricky question of when to quarantine students and for how long. Some parents have said Chicago’s 14-day approach was overly cautious even though it is in line with federal Centers for Disease Control and Prevention guidance, which recommends between a 7- and 14-day quarantine for students depending on what other COVID-19 prevention and detection strategies are in place.

For example, the CDC recommends a 7-day quarantine for unvaccinated students in districts with “sufficient and available” diagnostic testing services. Chicago Public Schools’ testing rollout has so far been criticized for delays in testing rollouts as well as low opt-in rates.

Asked about testing volume on Tuesday, Arwady said Chicago Public Schools’ size make it a challenge for ramping up testing and emphasized that federal guidelines recommend testing about 10% of unvaccinated students weekly, not every student. “There’s not a stated goal to be doing everybody every week. The goal is to get to the point where we have screening testing in place.”

The percentages of families that have opted in so far has been remarkably low —  as of Tuesday, only 20,617 students, or roughly 6% of enrollment, had signed up for the campus testing program. And despite officials’ pledges that every campus would start offering testing as of last week, Martinez said Tuesday that Chicago is still in ramp-up mode and faces logistical hurdles with staffing from its Massachusetts-based vendor Thermo Fisher.

District data shows 11,524 tests were administered between Sept. 26 and Oct. 2 — double the number of the previous week, but a fraction in a district with 340,000-some students. (Per that weekly data, fewer than 1% of tests came back positive and 3.4% were rendered invalid.)

Martinez said Tuesday that the district was on track to provide 20,000 tests this week.

The city’s teachers union has repeatedly pointed to logistical delays in the testing rollout and an insufficient supply of contact tracers as evidence that the district and the city need to do more to keep children and educators safe.

The deaths of two mothers at a local elementary school — deaths that family members said were due to COVID — galvanized the union to call for tougher safety measures. In the case of Jensen Elementary, where the mothers died, 11 of 17 classrooms at the school were in quarantine, a situation that union officials argued should have triggered a temporary campus closure.

Parents have had mixed reactions to quarantine notices.

Nancy Griffin, a member of the Chicago Parent Collective, said the school district still needs quarantine rules, but it should reduce the quarantine period and change its approach of sending home entire classrooms to students who truly were within three feet of another, such as at a small group table. “CPS’ stance continues to keep children out of school more days than other schools in Chicago, again putting CPS students at a disadvantage from other Chicago schools as well as other Illinois schools,” she said recently.

Others have called for the city to step up remote learning options so that students who are quarantined are guaranteed some sort of virtual experience. Currently, only students quarantined by the school district are given access to virtual classrooms. Those who travel out of state or self-isolate due to exposure off school grounds are not guaranteed remote learning.