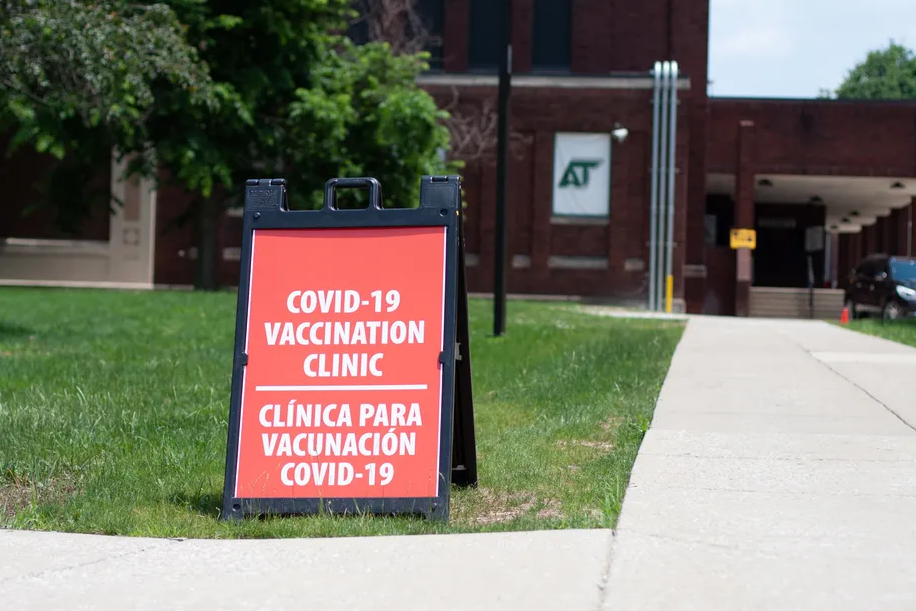 More than 5,000 Chicago Public Schools employees remained unvaccinated as of late last week, but the district reported higher vaccination rates than other large city agencies, such as the police and fire departments, according to data released Monday.

Chicago Public Schools said that 34,066 of its 39,732 employees were vaccinated, putting the district at 86% compliance.

A total of 5,666 employees were not vaccinated as of 7 a.m. on Oct. 15.  The majority of the unvaccinated employees — 73% — were non-teaching staff, according to data obtained from Chicago Public Schools.

Among unvaccinated Chicago Public School employees, 1,547 — or 14% — had been approved for exemptions for medical or religious reasons.

Citywide, 79% of employees across city agencies reported vaccination status. Of those, 84% were fully vaccinated, according to numbers released by the Department of Human Resources.

Chicago Public Schools was early among large urban school districts to mandate employee vaccinations. It initially said that employees who did not comply with the mandate and did not receive exemptions for religious or medical reasons would be ineligible for work.

But last week, the district softened that stance, saying it would allow unvaccinated employees to continue working after the Oct. 15 deadline so long as they take a weekly COVID-19 test.

The relaxed mandate came after Mayor Lori Lightfoot took the same step in allowing unvaccinated city workers to test weekly, at least through December. The city’s police union had threatened to strike over the mandate.

Chicago’s teachers union supported the mandate but penned a letter last week urging the mayor not to bar unvaccinated school workers from campuses. The letter, which was also signed by two unions representing school support staff, suggested it would be unfair to grant other unvaccinated city workers the option to test regularly but not give unvaccinated district employees the same choice. Support staffers are predominantly Black and Latina women, according to the unions.

During a press conference last week, CPS CEO Pedro Martinez said he is reluctant to set a new deadline for vaccination. But he said the district would work hard to see all employees and eligible students get shots before the winter holidays, when family gatherings and travel increase the transmission risk.

“My hope is that it will be a whole campaign that we will be doing together,” Martinez said.

City officials released responses from various agencies Monday afternoon. The Chicago Police Department had the lowest response rates of many agencies, with 35% of the city’s 12,770 police officers not reporting their vaccination status.

In the Chicago Fire Department, only 72% of employees responded with their vaccination status, of which 84% reported being vaccinated.

“By getting vaccinated, we can preserve the safety of City employees and the health of our communities while moving Chicago closer to a safe return to normalcy,” Mayor Lori Lightfoot said in a statement.

Chicago Department of Public Health Commissioner Allison Arwady added that the vaccine was “the most important thing city workers could do to protect themselves against COVID-19 and to protect the people they serve.”

This article was originally posted on Chicago schools staff more likely than police, fire employees to be vaccinated