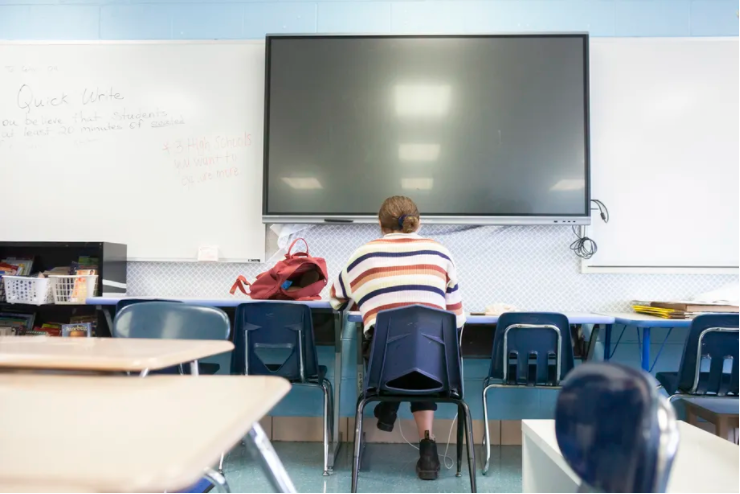 One ongoing roadblock in Chicago’s school reopening plan: the significant numbers of teachers and students who are currently remote.

But that could change when the school year’s fourth quarter begins on April 19, the district said Wednesday. Officials are calling back most teachers this spring and have reported an uptick in the number of families signing up for in-person learning. And for the first time since the pandemic began, high school students are included in that number.

Of the 278,574 district students who would be eligible to return to school buildings this spring, 43% of families said on a district-run survey this week that they would return to in-person learning, school officials revealed at Wednesday’s board meeting. That’s higher than the 37% of pre-kindergarten to eighth grade families who said they would return to in-person learning in the district’s December survey.

Those percentages were lower among the city’s 72,947 high school students, who have the option to learn on campus for the first time since schools closed last spring: 35.6% said they would return, 45.3% declined, and 7.5%, or nearly 2,000 families, didn’t reply.

But to bring those students back, Chicago needs in-person staff. And with a full reopening less than a month away, and with four schools-based vaccination centers up and running, Chicago is asking most of its teachers to return to campus. (So far, about 14,000 district staff have been vaccinated for COVID-19.)

But that effort is complicated by a lack of data on which teachers have received vaccinations, and the local teachers union has been reticent to share that information while a high school reopening agreement is still being negotiated. In addition, recent reports showing that the company originally contracted to provide vaccinations for Chicago Public Schools employees gave thousands of vaccines to non-district staff in violation of their agreement has also raised some concern about the effort.

Staffing schools has been an ongoing area of concern for district leaders, and a key part of the labor dispute with the teachers union since the first school buildings opened to prekindergarten and some special education students in January.

The date for a high school return has been tentatively set for next month, but district officials must first negotiate a deal with the teachers union and confirm which teachers will be returning to campus. As families weigh whether to return for in-person learning, the question of what staff will be there to greet students is an important part of that decision.

For the second stage of reopening, which took place in February and March, the district gave 5,800 educators remote-work accommodations, some of which addressed medical conditions that put educators at high risk for complications if they contracted the coronavirus. Now school officials say those accommodations may no longer be necessary and, in a letter sent earlier this month, asked staff who received them to either reapply for a work-from-home allowance or return to buildings.

While the district has made vaccinations available to all Chicago Public Schools staff, a scenario that was almost unimaginable when it first reopened some schools amid a nationwide vaccine shortage in January, district officials have reported low engagement with a survey to determine teachers’ vaccination status.

Data shared at the board meeting shows that just under one-third of the district’s 47,778 staff have been vaccinated. Of the 24,389 educators who replied to the district’s survey, 61% said they have had their first or second doses of a COVID-19 vaccine. But 2,702 educators said they did not plan to get vaccinated.

Union officials, in an email earlier this month, cautioned members about answering the district’s vaccine survey until the union had secured an agreement on whether, and how, union members should disclose their vaccination status. The union also noted that it lacked data on teacher vaccinations and said that even if all teachers were vaccinated, students could still risk catching COVID-19 in school buildings.

Parent and longtime education activist Rousemary Vega, speaking at Wednesday’s meeting, said the issues with the district’s vaccine rollout would only hurt family trust in the district. “There is not one contract CPS can do without corruption,” she said, referring to the vendor who had vaccinated those who don’t work for the school district.

District officials Wednesday promised that there would only be a minor delay in rescheduling appointments that were planned for Wednesday as the district found a new vaccination vendor.

But they said the lack of staff participation in the vaccination survey had put them in a tough position. “We are balancing everyone’s needs with what we can make work and still meet staffing needs for in-person learning,” the district’s Chief Talent Officer Matt Lyons said. “We have a lot of people who did not complete the information to help us not just make these decisions. For those individuals, we are expecting them to be back on April 16, unless they provide us information on their vaccination status.”

An additional complicating factor: staff who have declined to receive the vaccine. Lyons said the district will make allowances for people who have religious or health concerns around taking the vaccine, but personal preference was not enough. “We need to be acting in the best interests of our students and not the preferences of employees,” Lyons said.

Lyons said he is confident the district will have enough staff to open all schools, even with the lag in getting information about teachers vaccine status. “We are in a good spot,” he said. “We feel confident about being able to provide really high quality instructional experience for students.”