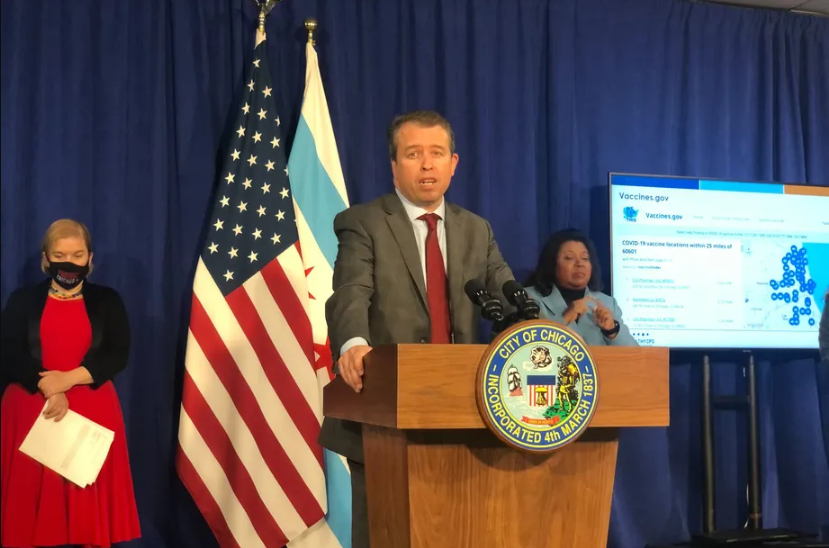 Chicago school and city officials defended a last-minute decision to cancel classes Friday as part of the district’s Vaccine Awareness Day by pointing to about 200 sites where students can get the pediatric COVID vaccine.

Arwady said the health department is distributing doses to all providers across the city asking for the vaccine. A priority is to have children vaccinated with a pediatrician, which is where they see “much better uptake,” Arwady said.

City officials have been pushing a large-scale marketing campaign around the pediatric vaccine, including the last-minute announcement canceling classes for Friday’s Vaccine Awareness Day.

Chicago schools CEO Pedro Martinez said the vaccination event was an “investment for the rest of the school year.”

“We want to have a strong second semester and we want to have stability in the classroom,” Martinez said at the Tuesday press conference.

Vaccination rates among students age 12 and up, who have been eligible for the vaccine since May, have been low. About 47% of students ages 12-17 have received at least one dose of the vaccination as of the last week of October, compared with a citywide average of 75% among residents 12 and older.

More than 6,000 5- to 11-year-olds in the city have received the pediatric vaccine in the first few days of availability for that age group, Arwady said.

As the holidays approach and people start gathering, Arwady said now is the time for parents to get their children vaccinated.

“I really don’t want to watch families fall into the ‘I’m going to wait and see’ trap here,” she said.

The decision to cancel classes came last Thursday, two days after the federal government approved a pediatric COVID vaccine for 5- to 11-year-olds.

The abrupt scheduling of the Vaccine Awareness holiday has irked many parents, who say they are scrambling for child care. Some parents and school employees are also questioning whether staffing shortages  — rather than the vaccination push described by district and city officials — prodded district officials to stage the unscheduled school holiday.

Katheryn Rose, who has a child in kindergarten and two in pre-kindergarten, said if the district was “sincere about vaccinating kids, they would bring the vaccine to students at schools.”

”Is every school building going to offer vaccinations and child care?” Rose questioned.

“Clearly not,” she said. “This really leaves parents in a lurch.”

Rose said it was “insulting” for the district to cancel classes on a week’s notice, placing a burden on parents to “try to secure child care.”

No district, regardless of the size, should be able to change the calendar so abruptly, Rose said. “I would expect the school board would have to weigh in on a decision like that. In this case, it doesn’t seem like that happened.”

A Chicago Public Schools principal, who asked to remain anonymous out of fear of retaliation, said the district arrived at the Vaccination Awareness Day idea after it became clear schools would not be able to line up substitutes for educators and other staff members taking Friday off following the Veterans Day holiday.

Martinez held a virtual meeting with school leaders last Wednesday to float the idea of cancelling classes that day, the principal said

With that staffing crunch looming, many colleagues were supportive of the idea, the principal said. But there were also deep concerns about working parents scrambling to line up child care on such a short notice, especially during what some educators in the district call “No School November.”

“This is not taking to heart what our mission and purpose is, which includes providing safety for poor children,” that principal said, calling the move irresponsible. “We need stability in school for our kids.”

The principal said school leaders have been clamoring for more student and family vaccination opportunities on campus: “If we want to get 90% of kids vaccinated, we need to be doing it at school. I really don’t understand why we are not doing this.”

During Tuesday’s press conference, Martinez acknowledged a substitute shortage nationwide but said the district would have had enough substitutes had they not canceled classes on Friday.

Asked whether parents were consulted before canceling classes, Martinez said the decision was made because the district wants to avoid more students being quarantined in the event of a surge during the holiday season.

The Chicago Teachers Union last week supported the district’s decision to give teachers paid time off and allow families to get their children vaccinated.

While neighborhood schools will observe canceled classes, the Noble Charter School network will have classes as previously scheduled. Noble Charter School has been educating students and families around vaccine awareness as well as hosting town halls and vaccine clinics at all school campuses, said Matt McCabe, spokesman for the charter network.

Last year, Noble Schools partnered with Esperanza Health Centers to host a mass vaccination site at Mansueto High School on the Southwest Side in Brighton Park.

Acero Charters Schools said they would also be observing the Vaccination Awareness Day to give students and teachers a chance to be vaccinated, said Helena Stangle, a spokeswoman for the Acero schools.

Starting next Tuesday, vaccination clinics will be open at every Acero campus along with vaccination events across the network, Stangle said.

In response to the child care concerns, the city and district said they were working with the parks and libraries to offer programs for families on Thursday and Friday. Libraries will offer computer access, grab-n-go kits, and vaccine information. The Park District will also offer programs at 54 different parks across the city.

Shedd Aquarium and the Museum of Science of Industry will offer free admission to CPS students. The YMCA also planned to offer “full-day education and child care” to families struggling to find support on Vaccination Awareness Day.

Children are eligible for a $100 gift card for getting a first dose of a vaccination at a site operated by the school district or public health department.

A list of pediatric vaccination sites can be found here.

Even as the district moves forward with the Vaccination Awareness Day, parents still feel the district needs to better communicate with them about COVID safety procedures.

Parent Blaire Flowers first learned about Friday’s canceled classes for Vaccination Awareness Day from her daughter on Monday. “The communication is poor,” Flowers said. “We have to hear about it word-of-mouth.”

Flowers, who said she’s still on the fence about the vaccine,  said a day dedicated to vaccine awareness, makes it feel like “they are forcing people to get their children vaccinated.”

“There is an echo of uncertainty with CPS right now,” Flowers added. “It feels like they don’t know what they’re doing so they’re winging it right now.”