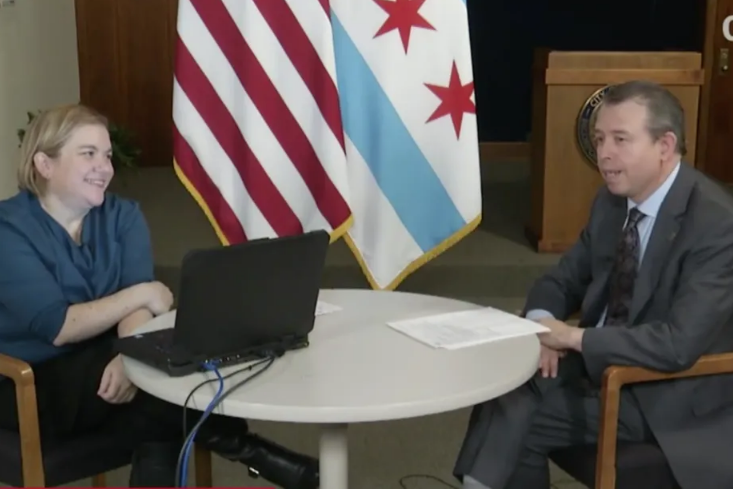 By Mauricio Pena .Chalkbeat on November 3, 2021

With a pediatric vaccine on the way and improvements in its rocky rollout of COVID-19 testing, Chicago Public Schools will move to eliminate quarantines for students who agree to be tested, CEO Pedro Martinez said Tuesday.

The district plans to launch a test-to-stay pilot program that would give unvaccinated  students exposed to COVID-19 the option of frequent testing to stay on campus, said Martinez, who appeared alongside the city’s top health official, Dr. Allison Arwady.

The district plans to use school-based COVID testing “to really look at how we minimize quarantine,” Martinez said. “The biggest concern I’m hearing right now is that we are quarantining too many children.”

As of Tuesday, 3,754 students and 121 staff were quarantined, according to the latest figures presented by district officials. Currently, Chicago requires unvaccinated students to quarantine for 10 days after known exposure to someone who has tested positive for COVID. Under CPS policy, that is defined as being within 6 feet of a person with COVID for 15 minutes or more, with or without a mask.

One potential impediment to the district’s plan, however, is the low rate of parents who’ve opted their children into COVID-19 testing. So far, only about 8% of the district’s student body, or about 29,000 students, have enrolled in the testing program across Chicago Public Schools, according to the district’s latest figures.

Months into the new year, there has been little buy-in from parents, some of whom told Chalkbeat earlier this month that the district has not communicated clearly about the program.

Still, Martinez said the district hopes to launch the test-to-stay pilot program in November. As part of the program, CPS would be calling parents directly to get more students opted-in for testing, Martinez said.

The Illinois State Board of Education issued a “Test-to-Stay” protocol that gives districts some flexibility to relax quarantine rules when thorough testing programs are in place. Under the policy, students in close contact with someone who has tested positive for COVID-19 can return to campus without a quarantine period if they are tested regularly and present a negative test before returning to school and adhere to rules around mask wearing and social distancing.

As part of the guidance updated in September, students must be tested by districts on days one, three, five, and seven following exposure to stay in classes.

The test-to-stay protocol comes after Chicago Public Schools says it has bolstered its testing capacity.

Over the last month, district officials say they have ramped up testing capacity at every school.  The district conducted 23,121 COVID tests between Oct. 24 and Oct. 30 compared to 14,921 tests between Sept. 26 and Oct 2.

Even with increased testing capabilities, Martinez said the district aims to provide 40,000 tests for unvaccinated students and staff a week before the end of December.

Arwady, on Tuesday, said the final approval and pediatric vaccine could come in the coming days. Depending on final approval, the city could start providing vaccines this weekend or early next week, Arwady said.