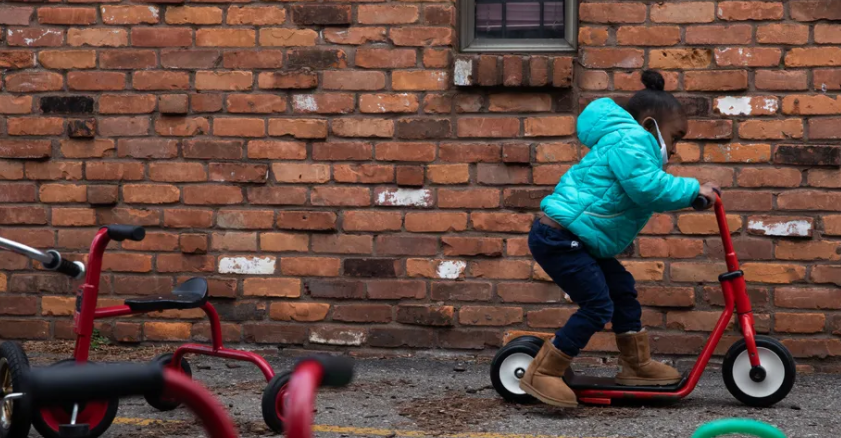 Chicago is stepping up its preschool advertising. Will families return?

Chicago kicked off its preschool application process with much fanfare last week as the city aims to bounce back from a steep drop in prekindergarten enrollment during the pandemic.

The school district lost a third of its preschool enrollment last fall, with a 44% decline among Black 3- and 4-year-olds — a data point that has raised concerns about long-term academic fallout for young children.

Increased advertising might not be enough to recruit Chicago families back to in-person preschool. The timeline to make vaccines widely available for children younger than age 12 is unclear, and some families remain wary of in-person learning.

Some other cities, such as New York, have used the pandemic to reimagine their programs or expand eligibility, but Chicago isn’t yet doing that. The school district is still focused on opening more classrooms — it plans to add 62 classrooms next fall at a cost of $16 million as it forges ahead with universal pre-K — but there are questions about whether it can fill them, despite research that underscores the effectiveness of pre-K on closing the achievement gap and the critical role programs play in child wellness, such as developmental screenings for disabilities.

Beyond advertising, some parents contend that the city could do more to reshape the application process — for example, by expanding full-day eligibility to younger children, opening it up to families earlier in the year, and guaranteeing neighborhood residents some seats at their zoned schools. Chicago currently prioritizes full-day, free preschool seats in schools for 4-year-olds and some 3-year-olds with disabilities, steering many 3-year-olds to half-day programs that can be inconvenient for working families. It also offers seats in its community programs that are subsidized for families who qualify.

All applications go through a central portal with some students prioritized depending on their age, whether they have a disability, or fall into certain high-priority categories such as homelessness or foster care.

The result in prior years: Thousands of 3-year-olds end up on waitlists, while classrooms have open seats.

A deluge of federal dollars and concerns about enrollment have prompted other cities to rethink who’s eligible for preschool. Flush with federal cash, New York City, for example, will make preschool available for 3-year-olds citywide, the mayor said in March.

For now, Chicago said it plans to focus on recruiting and not restructuring, though Mayor Lori Lightfoot has convened a working group to study early learning and make recommendations on unifying a fragmented system. Chicago Public Schools has said that it will offer just over 16,000 full-day free seats this fall, an increase of 1,200 from the previous year. Community-based programs will offer another 8,000 to families that qualify for tuition-based subsidies for working families, and federal Head Start plans to enroll about 5,000 children, bringing the citywide total of free or largely subsidized seats to just under 30,000. (According to the University of Chicago’s Chapin Hall, which has compiled some early childhood data, Chicago is home to about 61,500 3- and 4-year-olds.)

In a written statement, Brandie Knazze, acting commissioner of the Chicago Department of Family and Support Services, said the focus will be “continuity and stability.” Chicago plans to increase its social media presence and send teams to canvass in neighborhoods in an effort to share that message, a spokesman for the department said.

But those who’ve gone through the application and the enrollment process say more could be done.

“Chicago’s system is confusing,” said Alison Clark, a pediatric nurse practitioner who applied last spring when her son was 3. Her son was waitlisted, then offered a half-day seat later in the fall. By then, she’d already enrolled him in a daycare.

Clark said the stakes are high for the children she treats via a community health center: When children miss out on preschool, they often miss out on critical foundational learning — but also on screenings for developmental delays and disabilities.

Clark plans to reapply for a seat this year, now that her son is 4 and supposedly gets dibs on a full-day seat, though she has a slew of unknowns: when she’ll be notified, whether she’ll get her first-choice school nearby, and just how she and her husband will handle the tricky afternoon hours of 3 p.m. to 5 p.m. if they do get a seat. (Many school programs don’t offer aftercare for preschoolers.)

Some parents have also raised questions about automatic enrollment. Families are not guaranteed seats in neighborhood schools. Instead, every parent must list up to two choices on an application that covers both public schools and community programs (that some middle-income families will have to pay tuition at the community programs is not entirely clear on the application).

Karin Gutierrez, a mother of three, has been through the preschool process three times. After paying for preschool for her first child, she’s thankful for the expansion of free, full-day seats, and understands why the district prioritizes placing highest-need students first. But as an active parent at her school, she also craves the consistency that would come with a guaranteed spot in her neighborhood school.

“We’re a bilingual household and the dual language program is really important to me,” she said. But she also acknowledges the complications underneath the policy. “There are kids with all different abilities and different needs, and if there is a kid outside our neighborhood who is high-need and needs a spot, I’m happy to relinquish that.”

Enter into the complexities of preschool enrollment another wild card: Just how the pandemic will affect enrollment in the neighborhoods most impacted by COVID-19. Even as more adults have access to a vaccine, the timeline for children under age 16 remains unclear, and some families — particularly those in some neighborhoods on the South and West sides that saw positivity rates crest past 20% in winter months — may be reluctant to send their children into group settings.

“It’s difficult to say how these schools and programs will bounce back,” said Marquinta Thomas, the director of referrals and outreach for Illinois Action for Children, the nonprofit that fields parent phone calls for the city’s Early Learning application and hotline. “There’s a lot of support for that to happen, but trust has to be there for these communities for people to return.”

Thomas said her team has fielded the typical questions about preschool enrollment and a new layer of pandemic-related ones. Will programs offer remote learning options? (The public school district has said that it will continue to offer remote learning more broadly, even while it pledged a full five-day return for students in fall just this week. It’s not clear yet what community providers will do.) Will all teachers be vaccinated? (The district has offered vaccinations to all teachers, but hasn’t been able to fully track how many have taken them.) When will vaccines be available for young children? (Public health experts have said early 2022, but the timeline isn’t quite clear.)

Even nationally, the full arc of preschool enrollment is still obscured in the moment of the pandemic, said GG Weisenfeld, assistant research professor at the National Institute for Early Education Research at Rutgers Graduate School of Education. What’s more, programs likely will face added challenges in the fall as students come in with broader needs.

But she stressed that there are also lessons to be learned from the COVID-19 year, such as the success of delivering materials to homes of families and engaging parents more closely in everything from instruction to charting child development milestones.

If educators can adopt better ways to reach parents, maybe, too, can cities.

“This year parents are more involved in that preschool experience,” Weisenfeld said. “Hopefully there is still that role for them moving forward — and that appreciation for what a parent can offer.”

This article was originally posted on Chicago is stepping up its preschool advertising. Will families return?