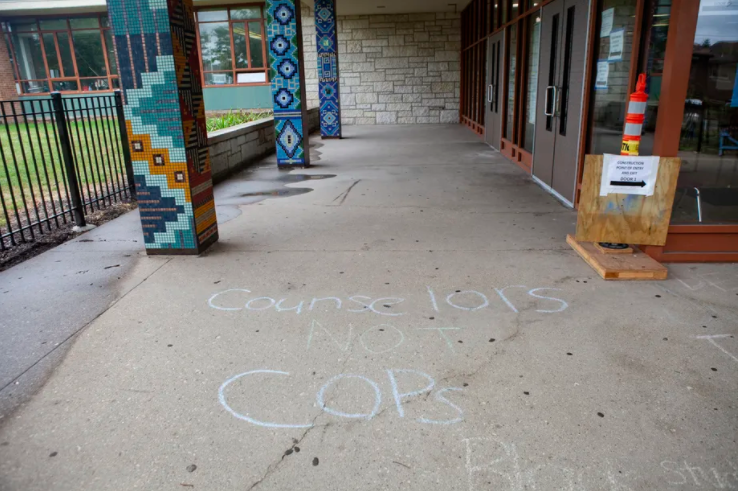 The district has asked each high school to form a campus safety committee to make recommendations.

Seeking alternatives to assigning police to campuses, Chicago is asking 55 high schools to draft safety plans based on restorative justice and crisis management.

The school district has assigned newly appointed safety committees at each school to devise the plans then send them to local school councils for approval in June.

On Wednesday, the school district offered the most detailed look yet at how it plans to reimagine school safety. Five community-based nonprofits will help train schools in student mental health, crisis de-escalation, and restorative practices such as peace circles. The district plans to spend an additional $24 million over three years on addressing student trauma and mental health.

After violence, complaints, and a national reckoning about the policing of Black and brown youth, Chicago’s school police program drew intensified scrutiny last summer. Instead of cutting ties with the police department entirely, as some cities have done, Chicago Public Schools leaders insisted that each campus’s Local School Council decide whether to retain officers. Ultimately, 17 decided to end campus policing, but dozens of others chose to retain officers and take more time to study the issue.

The district has handed responsibility of drafting individual safety plans to schools. But some school board members and others have criticized that approach and said the district needs a broad, bold vision for campus safety that relies less or not at all on the city’s police department.

“We urge the district to think more boldly about how it addresses safety,” said Jennie Biggs, a spokeswoman for the parent advocacy group Raise Your Hand, at the board meeting Wednesday. “Keeping police in schools does not live up to the spirit of this process.”

After rejecting a reform proposal last summer, the board approved an alternate that requires local school councils to craft campus safety plans. Options could include keeping their police officers.

Several community groups — including some vocal critics of school policing — helped draft the overall plan and will advise and train safety committees. Those groups include Voices of Youth in Chicago Education (VOYCE), Mikva Challenge, Community Organizing and Family Issues, The ARK of St. Sabina, and BUILD Inc. Organization leaders said Wednesday that they will solicit student input as a critical part of their work.

“(Our) original position on this had always been the full removal of police officers, but we also wanted investments in mental health and other positive youth leadership developments,” said Maria Degillo, an organizer with Voices of Youth in Chicago Education, which helped organize student protests of school police last summer. “Healing and equity need to be a huge part of this.”

Other recommendations include potentially redesigning how students enter and exit campuses — in many Chicago high schools, students must go through metal detectors — as well as cultivating student leadership, and increasing parent and community engagement.

On Wednesday, school board members largely favored the plan, but questioned the timeline and asked the district’s chief of safety and security, Jadine Chou, if schools will receive extra money to help pay for alternatives to school police.

Chou said the district will consider school safety budgets individually and has money to help implement plans. She did not provide specific numbers. “What we’re trying to do is get very tangible programs and resources to schools,” she said.