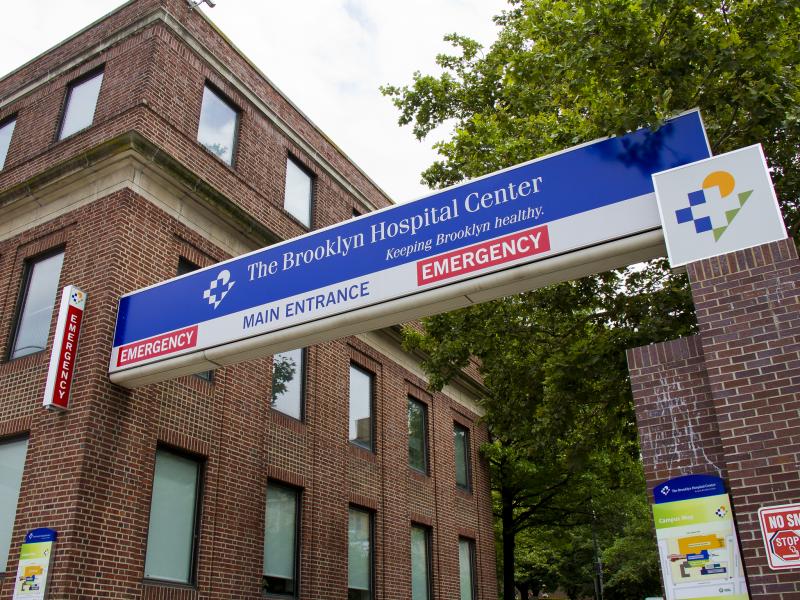 With old financial woes made worse in the pandemic, the Brooklyn Hospital Center is pursuing a shot in the arm — looking to sell and lease portions of its 175-year-old campus to private developers.

For years, the borough’s oldest hospital has planned to cash in its prime downtown real estate to boost declining revenue. Unlike Long Island College Hospital, which left neighbors outraged by its shutdown, Brooklyn Hospital aims to expand and modernize.

The coronavirus heightened the urgency, says the hospital’s president, who announced last week that the independent health center is interviewing developers to help build out a new medical complex as well as money-generating housing and retail.

“We’re not deviating from our long-term plan,” Brooklyn Hospital president Gary Terrinoni told THE CITY. “It’s just that the COVID situation has just hit us in the stomach when none of us were really expecting that.”

Some locals are concerned, though, about whether new buildings would cast shadows over nearby Fort Greene Park, a neighborhood jewel with a pricey polishing in the works. And it’s unclear whether the hospital’s political ties will help push a project through the city’s public review process after upcoming elections change the face of local government.

During the pandemic’s deadliest weeks one year ago, Brooklyn Hospital Center took to the front lines of New York’s war against a new and terrifying virus. A New York Times reporter embedded with its COVID response teams. The hospital opened outdoor tents to pre-screen patients and used freezer trucks as a makeshift morgue.

The challenges for the hospital had only just begun.

Gov. Andrew Cuomo’s order to halt elective surgeries statewide for two months cut into the hospital’s revenue, Terrinoni said. He added that the emergency department’s volume has declined and that inpatient care — where hospitals make the majority of their money — hasn’t returned to pre-pandemic levels.

The project would also include six other buildings, with up to 1,000 units of permanently affordable housing as well as other apartments and health care office space for doctors and other healthcare professionals, according to a hospital news release.

The majority of Brooklyn Hospital’s patients are low income, insured via Medicaid or Medicare. That puts the organization in a financial bind, said Terrinoni.

“We’re not getting paid enough by the government,” he said. “We just have to find ways to be able to find other streams of revenue that could support our mission.”

He aims to finalize deals “probably sometime in the middle of 2022, and begin monetizing some of this property, and ensuring our longevity in the marketplace.”

The new plans will have to go through the city’s often contentious land-use review process, at a time when many ambitious projects have been put on hold in court or derailed by local Council members.

That includes the former Long Island College Hospital, which shut down in 2014 despite protests that featured then-mayoral candidate Bill de Blasio. After failing to secure Council support for a complex that included affordable housing, the developer scaled down and built condominiums.

Current City Councilmember Laurie Cumbo (D-Brooklyn) has not taken a position on the Brooklyn Hospital project. She told THE CITY that the project won’t come before her and the Council during the remaining months of her tenure, which ends in November.

“This will really be a part of the legacy of the next City Council member who will be coming in,” Cumbo said.

But some candidates for her seat, which she will vacate at year’s end due to term limits, are eyeing the plans skeptically — especially because the real estate adjoins Fort Greene Park, which is on tap for an overhaul.

“I don’t think these things happen in a vacuum,” said Michael Hollingsworth, a candidate for the seat who is combating planned development of towers elsewhere in the district that would overshadow the Brooklyn Botanic Garden. “I think a renovated Fort Greene Park can be sold as an amenity for a luxury building.”

Hollingsworth said he wants to know whether a connection exists between the hospital’s plans and $24 million in upgrades set for Fort Greene Park.

The park sits next door to a valuable piece of property the hospital sold off in 2018: a Willoughby Street apartment tower the Rabsky Group bought for $95 million that came with development rights.

“That sale really was a godsend, not knowing that COVID was coming,” Terrinoni said.

Sandy Reiburn, a 31-year resident of Fort Greene, said she is concerned about the potential impact on the park of the forthcoming Rabsky development. She worried that whatever Rabsky builds will be a burden akin to the shadow-casting skyscrapers south of Central Park.

“This is yet one more impinging upon public space,” Reiburn told THE CITY.

She said that while she’s sympathetic to the hospital’s financial situation and grateful for the benefit the center provides the community, she is concerned by its “the pact with the devil, the trade-off with developers.”

Employee on Local Board

The city land review process will require an advisory vote from Brooklyn’s Community Board 2, which, pre-pandemic, held meetings in the hospital auditorium. The board’s chair, Lenny Singletary III, is also employed by Brooklyn Hospital as its vice president of external affairs.

THE CITY requested an interview with Singletary and the chair of the board’s Land Use Committee, Carlton Gordon. Singletary deferred to Gordon, who declined to comment, according to a Community Board 2 representative.

Singletary’s wife, Sarissa Phillips-Singletary, is chief of staff to Councilmember Robert Cornegy (D-Brooklyn), a candidate for borough president in the June primary.

Hollingsworth said the connection raises a red flag for him. “I’m not comfortable with the fact that the chair from the community board also works for Brooklyn Hospital,” Hollingsworth said.

Terrinoni said the hospital has already started working to engage the surrounding community, noting that the importance of the hospital’s premise has been obvious throughout the pandemic.

A spokesperson for the hospital said Singletary would recuse himself from any community board review.

“Mr. Singletary always acts with the utmost of integrity and will therefore certainly recuse himself at Community Board 2 if and when any matter regarding Brooklyn Hospital is considered by the Community Board,” the spokesperson, Greg Wagner, said in a statement.

For months last year, the sidewalks outside the hospital became the site of cheers, applause and dancing, part of a nightly ritual to honor health care workers as they changed shifts at 7 p.m.

“We want to make sure that whatever we’re doing here is compatible with the community and giving back to the community,” Terrinoni said.

The hospital is a meaningful institution for many residents of the surrounding area, including Rahjiem Jones, a lifelong New Yorker from Fort Greene. Jones said many of his loved ones died in the hospital, including his mother, a former hospital employee.

Jones, who’s been homeless for the last few years, said he hoped any housing would be affordable and the development would create jobs because he is looking for one.

He pointed down DeKalb Avenue toward the heart of downtown Brooklyn, where luxury buildings and ongoing construction could be seen and heard.

The Fort Greene Association, a local advocacy and park preservation group, which has previously opposed some housing development projects in the booming area, did not respond to multiple emailed requests for comment.

Terrinoni said that the needs of many constituencies must be taken into consideration.

“We just want to create the most value for this hospital that we can so that we could be around for another 175 years,” he said.