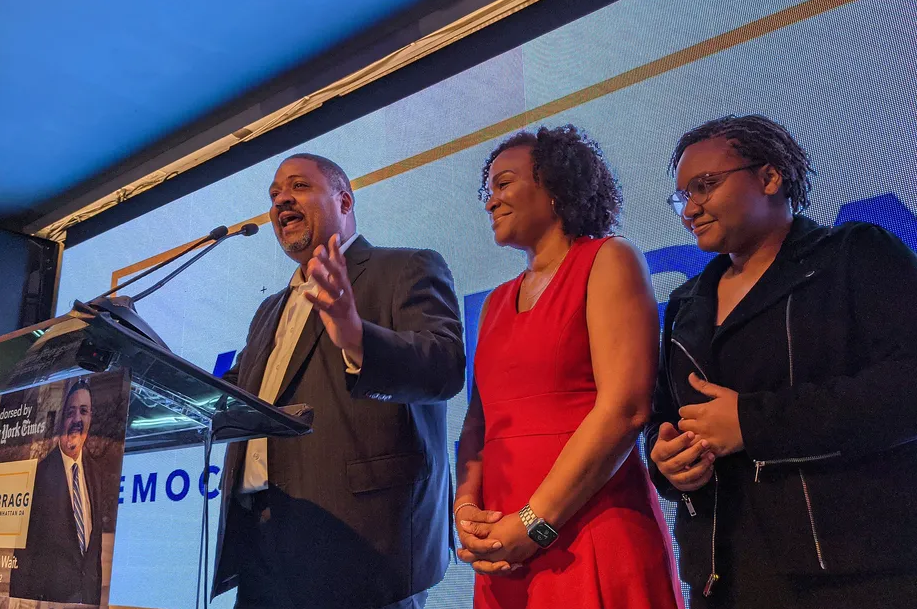 He garnered 34.6% of the vote with nearly 90% of scanners reporting as of Tuesday night, according to the Board of Elections. But these early results include only in-person votes from Primary Day and the nine-day early voting period.

Bragg held a four percentage point lead over candidate Tali Farhadian Weinstein, who was at 30.6%. The difference translates to about 7,000 votes.

At least 24,000 absentee ballots cast in Manhattan have yet to be counted, according to the BOE. The board will tabulate those votes over the next three weeks.

In an emotional speech late Tuesday night, Bragg did not claim victory, noting “there are still votes to be counted.”

“I’m a firm believer in democracy,” he said to a cheering crowd of supporters at The Cecil Steakhouse in Harlem. “But let me say again: Wow.”

“My name was on the ballot, but we all did this together and we’re going to govern together,” he added.

The race did not employ the city’s new ranked choice voting system — because it is a state position — making tabulation of the in-person votes relatively swift.

If the Harlem-born Democrat secures the primary win in the final tally, he is likely to easily win November’s general election in overwhelmingly blue Manhattan. Only one Republican, Thomas Kenniff, is making a run for the position, but registered Democrats outnumber Republicans nearly 9-to-1 in New York County, state voter records show.

But if Bragg wins, he’ll have the next six months without the “burden of campaigning to distract from a deep analysis of the great work that the prosecutors in the Manhattan DA’s office do every day.”

“Bragg has made it clear that he would change the office significantly if he became DA. But the rhetoric of the campaign trail often meets the realities of criminal justice, and the job doesn’t always end up being what the candidate or his supporters envisioned,” Alonso said.

Bragg positioned himself in the race as a reform-minded prosecutor with the managerial experience to handle the office’s 1,500 employees as well as complicated and high-profile cases.

Whoever wins would inherit the Manhattan DA’s investigation of former president Donald Trump, which recently moved to a grand jury, presuming it doesn’t conclude before November. The new DA would also contend with rising gun violence across the city.

If Bragg holds on, he will have beat out seven other Democrats, including Farhadian Weinstein, 45, the former general counsel to the Brooklyn District Attorney who used $8.2 million of her personal fortune to boost her campaign’s profile late in the race.

In a statement sent early Wednesday, Farhadian Weinstein emphasized “we have to be patient” with tens of thousands of ballots left to be counted.

“We all knew going into today that this race was not going to be decided tonight and it has not been,” she said.

Middle of the Pack

The wide-open contest to replace Vance — who announced he would not seek reelection earlier this year — was marked by a distinctively progressive bent. Many candidates ran on platforms that would have radically reshaped the office by cutting its budget, changing its personnel and declining to prosecute certain types of crimes.

But Manhattanites did not appear to have an appetite for that type of change this year; the farthest left-leaning candidates did not fare well in Tuesday’s primary.

Tahanie Aboushi, a civil rights attorney, garnered just over 11% of the vote, while Eliza Orlins, a public defender, received about 4%. Both had made promises to cut the DA’s budget by 50%. Assemblymember Dan Quart, who ran on a similar platform, was under 3% on Tuesday night.

Liz Crotty, a former Manhattan prosecutor who campaigned as a moderate with a more traditional law-and-order platform and a willingness to cooperate with the police, received about 5% of the vote. Lucy Lang and Diana Florence, both former prosecutors under Vance, were at about 8% and 5%, respectively.

Bragg’s policies fell somewhere in the middle of the pack between the most progressive Democratic candidates and the most conversative.

But a Bragg victory would spell major changes on the horizon for the storied office led by just two men — Vance and his predecessor Robert Morganthau — for nearly five decades.

Bragg has laid out a plan to dissolve and replace the DA’s current sex crimes unit and has published a list of charges he will not prosecute — including turnstile jumping and resisting arrest linked to non-violent offenses. He has also vowed to boost funding for investigating hate crimes, financial fraud and public corruption.

Late Tuesday, just before midnight, Bragg promised, if elected, to use the weight of the prosecutor’s office to bring justice both for victims and those who have been wronged by the system.

“To jail someone is a profound power. I have exercised that power before and I can tell you, there were some nights I could not sleep,” he said. “We will use it judiciously. We will govern collectively and we will use it for both safety and fairness in Manhattan.”