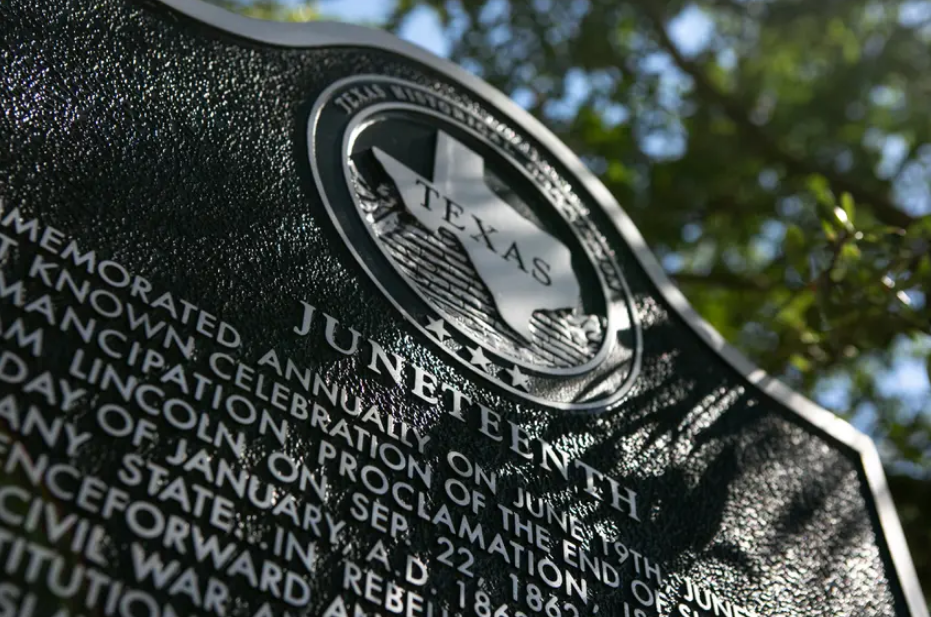 A bill to recognize Juneteenth as a federal holiday led by Republican U.S. Sen. John Cornyn and Democrat U.S. Rep. Sheila Jackson Lee, of Houston, is poised to become law as June 19 draws near.

The bill was passed in the Senate on Tuesday and the House on Wednesday, and signed into law by President Joe Biden on Thursday.

Lee said the House version of the bill has over 160 cosponsors and wide bipartisan support. Now, that bill has “legs and life” following the Senate’s unanimous approval, she said.

“What I see here today is racial divide crumbling, being crushed, under a momentous vote,” she said at a Wednesday press conference.

Cornyn, who was also present at the conference, said he looks forward to seeing the House pass the bill and hopefully “sending it to the President’s desk by the end of the week.”

Juneteenth commemorates June 19, 1865, the day that slavery officially came to an end in America when the last enslaved people in Galveston received an order informing them they were finally free — more than two years after the Emancipation Proclamation was signed.

Texas was the first state to recognize Juneteenth as a state holiday in 1980, then D.C. followed and 46 other states.

The bill to make Juneteenth a federal holiday first gained its footing last summer during the height of the Black Lives Matter protests and racial reckoning in America.

As House members debated the bill on Wednesday evening, several members from both sides of the aisle praised both Cornyn and Jackson Lee for their efforts to push the bill through.

Jackson Lee presided over the House chamber for most of that debate.

U.S. Rep. Randy Weber, a Friendswood Republican, voiced such sentiments and delivered remarks supporting the bill, noting that he represents Galveston in his 14th District.

“It’s long overdue to be recognized as a federal holiday,” said Weber. “I’ve been working on it myself…with my friend Sheila Jackson Lee and John Cornyn and others.”

The legislation was endorsed by major civil rights organizations such as the National Juneteenth Observance Foundation, the Leadership Conference on Civil Human Rights and NAACP.

As the bill began to gain traction last year, a Republican senator from Wisconsin stood in the way of what would have been an unanimous motion.

Sen. Ron Johnson said at the time he was concerned about creating an additional paid holiday for 2 million federal employees would come at a cost of $600 million per year.

But on Tuesday, Johnson issued a statement saying he would no longer oppose another unanimous consent motion this year despite still standing his ground on financial concerns.

“While it still seems strange that having taxpayers provide federal employees paid time off is now required to celebrate the end of slavery, it is clear that there is no appetite in Congress to further discuss the matter,” Johnson said in a statement. “Therefore, I do not intend to object.”

Some House Republicans voiced similar concerns on Wednesday over the economic cost of a new federal holiday while also stating they supported the legislation. U.S. Rep. Chip Roy, an Austin Republican, one of the Texas Republicans who voted against the bill, chided Democrats for bypassing the normal process for moving a bill through the House. He suggested that had the bill gone through the regular order, the it would have passed unanimously.

“Although our nation still has a long way to go to reckon with and overcome the dark legacy of slavery, the passage of the Juneteenth National Independence Day Act represents a meaningful step forward in the journey of healing America is still reckoning with,” he said in a statement.

Cornyn echoed those same sentiments, calling the passage of the bill a “a big step in our nation’s journey toward equality” in a statement Tuesday.