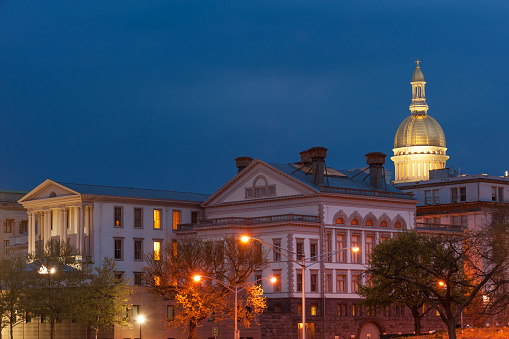 As Chicago moves ahead on negotiations to reopen high schools, a bill that would give the teachers union the ability to bargain over a broad range of issues is set to pass into law or be vetoed by Gov. J.B. Pritzker next week.

If it becomes law, HB 2275 would immediately expand what issues the union can bargain over, a tension that has been at the core of disputes between the district and the teachers union for nearly 25 years. It could have significant long-term implications for labor negotiations in Chicago.

Both the school district and the teachers union have been quiet about what effect the bill could have on current negotiations. District officials told Chalkbeat that negotiations are ongoing, with the goal to reopen high schools by April 19. Union President Jesse Sharkey said in a statement, “We continue to bargain with CPS around the complex challenges of in-person learning for high school students.”

HB 2275, which passed during the state legislature’s lame-duck session in January, would open up bargaining over such issues as class sizes, staff layoffs and the length of the school year.

Both Pritzker and Mayor Lori Lightfoot made this a key aspect of their campaigns before becoming elected officials, but they have been hesitant to publicly support the bill now.

In late January, Pritzker declined to say when, or if, he would sign the bill, only that he did support the effort to restore the teachers union’s rights. “Chicago is actually the only place in the state that doesn’t have those bargaining rights; everywhere else in the state does,” Pritzker said during a press conference.

The clock is ticking to sign HB 2275 — Pritzker’s 60-day period to review and take action is ending soon. This bill was sent to his desk Feb. 4 and if he doesn’t take any action, it will become law.

Chalkbeat Chicago reached out to the governor’s office for a comment, but it has yet to respond.

Lightfoot said in January that she would only support the legislation if the law went into effect in 2024, when the next teachers union contract expires, and would limit bargaining on the length of the school day and year. HB 2275 would start immediately, if it becomes law.

After contentious negotiations over reopening elementary and middle schools earlier this year, the district and union have been back at the table to work out an agreement for high school reopening.

Both sides have said that the high school agreement will draw heavily from the agreement to reopen elementary and middle schools. The sticking points are more likely to be about safety and logistics, such as figuring out a pod system that encompasses high school students’ complicated schedules, rather than about the length of the school day or other broader issues.

The union has said it also wants broader support for students and their families written into the agreement, “including the need for vaccines for age-eligible students and vulnerable family members and the critical importance of supporting students’ and families’ right to recovery,” Sharkey said in a statement.

The district has called most of its teachers back into classrooms for the fourth quarter. Around 5,000 high school staff who had been working remotely since schools first closed last year would be covered by the high school reopening agreement.

The Chicago Teachers Union has called for restoring the full range of its collective bargaining rights since they were narrowed, once under a 1995 state law called the Chicago School Reform Amendatory Act and again in 2011, under SB7, an education reform bill signed into law by former Gov. Pat Quinn.

The reform act created two classes of discussion in union bargaining, but only for districts in cities with a population of more than 500,000 people, limiting its effect to Chicago. The second bill also allowed some issues to be brought to the table only if both sides agreed.

Those two bargaining categories are  “mandatory” issues, which deal with economic factors, and a “permissive” category, which governs issues that “are within the sole discretion of the educational employer to decide to bargain,” according to the 1995 law.

In every labor battle since, including the teachers union strikes in 2012 and 2019 and the current school reopening discussions, the question of what can be bargained has been an issue.

The Chicago Teachers Union, under the model of “common good bargaining,” a term describing a union-organizing philosophy popularized by the Chicago union, has often been able to push past the legal guardrails of what it could bargain over to win bigger demands, often under the threat of a strike or by walking out altogether.

In 2012, the teachers union pushed back on education reform measures, including a shift in teacher assessments. In the 2019 strike, teachers won broad demands, including increasing the numbers of social workers, school nurses, and librarians, even as they made compromises on some of their demands, like lower class sizes or prep time.

And as the district moved to reopen schools for some students this winter, the union took the district to labor court multiple times, in part to push it to negotiate over key reopening details that the district said it alone has the authority to decide.

This past winter, the union threatened a strike if Chicago Public Schools tried to bring teachers back without an agreement that addressed testing, vaccines, and teacher accommodations.

In the end, they signed an agreement that experts have said is one of the most far-reaching in the nation.