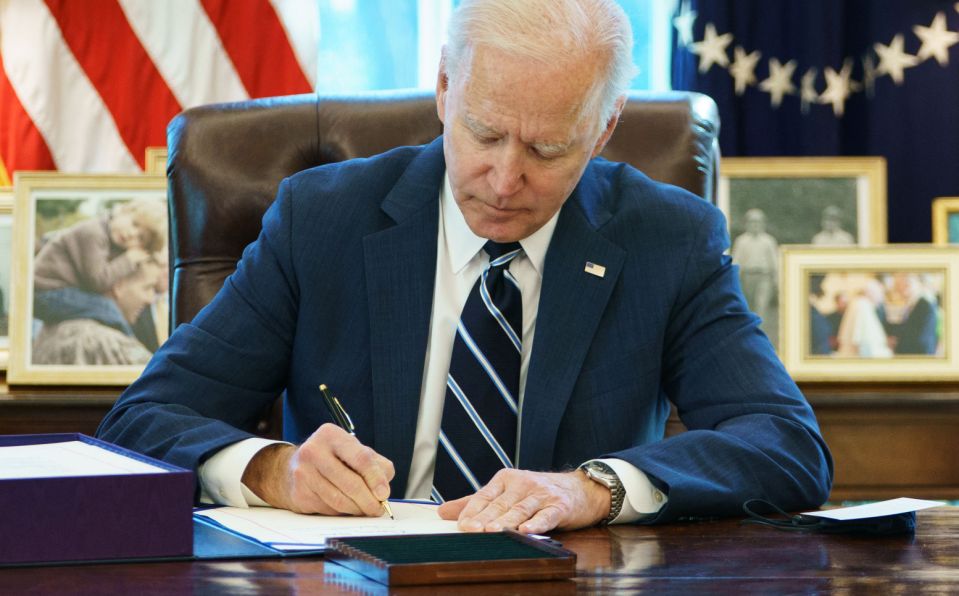 President Joe Biden on Thursday signed into law a $1.9 trillion stimulus bill that includes extended unemployment benefits, direct funding to states and municipalities, and $1,400 checks for most Americans.

“This historic legislation is about rebuilding the backbone of this country and giving the people of this nation – working people, middle-class folks, people who built the country – a fighting chance, that’s what the essence of it is,” Biden said in the Oval Office before signing the bill.

The president is scheduled to address the nation on Thursday night, where he’ll go into more detail about the relief included in the legislation.

White House chief of staff Ron Klain said the signing was moved up from Friday due to the enrolled bill arriving Wednesday night.

“We want to move as fast as possible,” he tweeted. “We will hold our celebration of the signing on Friday, as planned, with Congressional leaders!”

The U.S. House gave final passage to the bill, called the “American Rescue Plan Act,” on Wednesday in a narrow 220-211 vote. The Senate passed the bill on Saturday following hours of debate.

Republicans and fiscal hawks argue the spending bill includes billions of dollars for initiatives unrelated to the COVID-19 pandemic or economic recovery.

Republican National Committee Chairwoman Ronna McDaniel said in a statement Wednesday that the bill “does more to fulfill their progressive wish list than to ease the burdens facing small businesses and families as a result of COVID-19.”

“With less than 10% of the nearly $2 trillion package dedicated to directly combatting the virus and only one percent for vaccines, this enormous package makes a mockery of the crisis our country is facing,” she said.

The bill includes $350 billion for state and local governments, $160 billion for vaccines and testing, $170 billion for schools and universities, and an extension of $300-per-week unemployment benefits.

The $1,400 stimulus checks included in the legislation are expected to reach an estimated 85% of Americans and cost $410 billion, according to the Institute on Taxation and Economic Policy.

The latest round of stimulus checks were revised down from $2,000 checks, and a $15 federal minimum wage hike proposal was scratched from the plan after pushback from key Democrats.

This article was originally posted on Biden signs $1.9 trillion stimulus bill into law