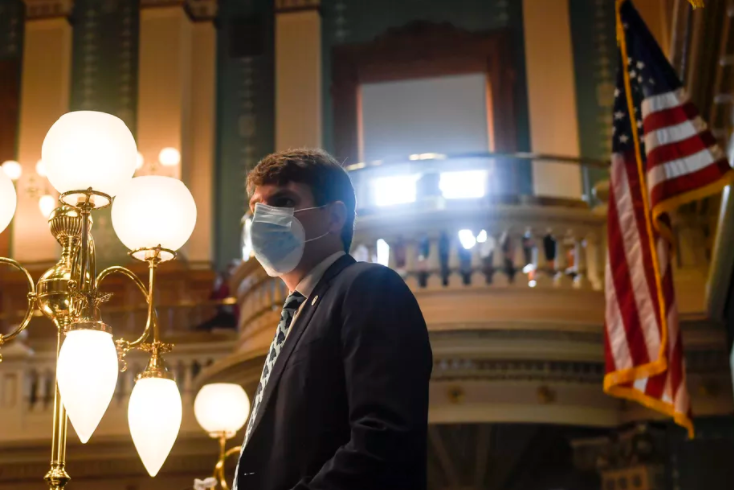 Colorado lawmakers returned to work Tuesday with Democratic leaders pledging to restore cuts made to K-12 and higher education during the early months of the pandemic last year and to invest more in education.

“The uphill recovery and the many daunting tasks before us may be mighty, but if we keep our hand steady on the tiller, they are no match for us,” said Colorado Speaker of the House Alec Garnett, a Denver Democrat, during his opening speech.

The Colorado legislature technically opened the 2021 session in mid-January but quickly recessed after swearing in new members to wait for coronavirus cases to decline. Tuesday’s convening launches lawmakers’ substantive work.

Leaders in both chambers said earlier that they plan to triage pandemic problems and hope to get back on track after a tumultuous 2020. For education, that means replacing money cut to balance the budget last year.

Specifically, Gov. Jared Polis has proposed restoring K-12 and higher education budgets, although some lawmakers have said much will depend on budget forecasts. In 2020, the state cut K-12 allocations by 5% per pupil and slashed grant programs on which schools rely.

Colorado cut higher education budgets by 58%. Polis partially backfilled some of those cuts with roughly $1 billion in federal money.

“This year, let’s listen to our teachers and commit together to restoring the cuts from last year’s budget,” Garnett said.

Garnett further called for investment in higher education, which has suffered numerous cuts during previous downturns.

“We need to grow our talented workforce by training Coloradans for the jobs of the future instead of importing talent from other states,” Garnett said. “We need to step up and ensure the colleges and universities who serve our Latinx, Native American, and Black students are equitably funded. It’s long overdue.”

In the Senate, President Leroy Garcia, a Pueblo Democrat, praised teachers and child care staff as some of the frontline workers “putting the well-being of others before their own and pressing forward even in their darkest hours.”

Garcia said this session should be a time of restitution but also reimagining how the state’s institutions work.

“Where some see only devastation, we see opportunity for compassion, for forming tighter bonds, because we write our own story and create our own destiny,” he said.

Senate Minority Leader Chris Holbert, a Parker Republican, said that his party would join in that work but also ask hard questions. He predicted many 20-15 votes, reflecting the partisan divide in that chamber, and that Republicans would force extended debate on some proposals.

In particular, he singled out a proposal from Senate Education Committee Chair Rachel Zenzinger, an Arvada Democrat, and the Joint Budget Committee to hold K-12 school funding steady for this budget year, even though schools reported almost 30,000 fewer students than in the 2019-20 school year.

“Where did those students go?” he asked. “Did they move to a different state? Are they in private school? Are they being home-schooled?”

If those students aren’t in Colorado schools, the money the state had pledged to educate them could go to other worthy needs, Holbert said, even as he also noted that legislators have held back money from K-12 for the past decade — $1.2 billion this budget year alone — and should pay down that IOU.

Republicans also have called for the state to make some money directly available to parents to spend on their children’s education during extended remote learning.

Some issues likely will divide the Democrats who control both chambers, in particular a call to suspend standardized testing this year. Bigger-picture school funding reforms could also prove contentious.

Leaders also emphasized that the state will need to look past the pandemic and build a sense of normalcy. To that end, lawmakers will likely take up bills that they put off last year in the midst of the crisis.

“We’re going to try to accomplish as much as we can,” Garcia said in an interview.

This article was originally posted on As Colorado House and Senate reconvene, leaders pledge funds for K-12, higher education