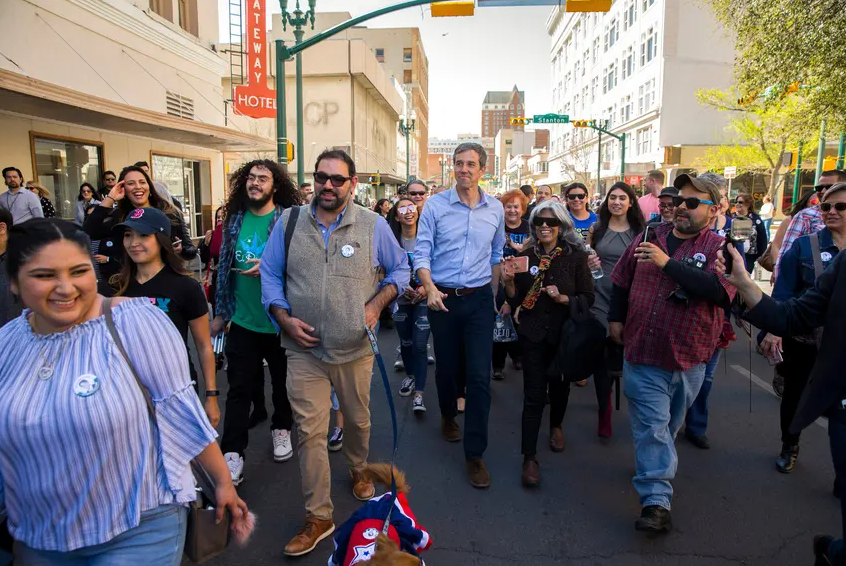 Ariana Escudero first met Beto O’Rourke in 2015, when she was an intern for the former congressman at his Washington, D.C., office.

When she learned Monday morning that O’Rourke was running for governor of Texas, she felt a familiar hope rise within her for the candidate who has become something of a hometown hero.

“I’ll probably call him and ask him, ‘What do you need?’” Escudero said Monday as she left a Barnes & Noble bookstore on El Paso’s east side, where she was browsing for new leisure reads. Escudero, who is now a lawyer, said she supports him because he’s a hard worker with whom she shares similar political values. “He got more mature and better” both as a politician and person since his days in Congress, she said.

Escudero, like many other El Pasoans, has followed O’Rourke’s political trajectory from a city council member to a presidential hopeful who nearly beat Republican U.S. Sen. Ted Cruz more than three years ago. If elected, O’Rourke would be the first Democrat since 1994 to be elected to a statewide office in Texas.

Throughout his campaigns, O’Rourke has shared his spotlight with El Paso. He proudly touted the binational city as one of America’s safest while former President Donald Trump attempted to cast border communities as dangerous. In 2019, after a gunman targeting Hispanics killed 23 people in an El Paso Walmart, O’Rourke changed his presidential campaign tactics to become one of the loudest voices among Democratic candidates on gun control.

O’Rourke’s announcement was widely praised in El Paso, where the former Democratic congressman kicked off his political career, serving six years on the city council after first being elected in 2005. O’Rourke went on to represent El Paso in the U.S. House of Representatives for six years.

The news had rapidly made its way around the city on Monday. Vanessa Vasquez, 22, a psychology major at the University of Texas at El Paso, said she first learned about O’Rourke when he ran for U.S. Senate. She said she “was bummed” that he lost but was excited that he decided to run for governor.

Her younger sister, Brisa Vasquez, 17, said that even though she can’t vote now, she would vote for O’Rourke come Election Day. The sisters said they have family in Ciudad Juárez and like that O’Rourke understands the bicultural lifestyle of a border city.

“I think he’s just very passionate about the people,” the elder Vasquez said.

Even with his celebritylike status here, O’Rourke has his critics, some of whom are still holding a grudge against him over his actions as a city council member.

“El Paso and Texas deserve better than a white-privileged male making decisions for our communities,” said Cynthia Renteria, who was 21 and a volunteer in her neighborhood association at the time she met O’Rourke.

Renteria points to his 2006 support of business leaders’ development plan that would have forced the relocation of residents of the historic Hispanic area known as Segundo Barrio, south of downtown El Paso.

At the time, the city hired a firm that compiled a marketing study about the outlook if El Paso went through with the development plan. In the 129-page presentation, there were two slides that sparked controversy. The first one represented the neighborhood at the time with an image of an older Hispanic man, described as “gritty, dirty, lazy” and Spanish-speaking. The following slide represented how the development plan could improve the neighborhood in the future. It used words like “educated, entrepreneurial” and “bi-lingual,” paired with photos of Spanish actress Penélope Cruz and Texas-born actor Matthew McConaughey.

O’Rourke initially voted to advance the plan, but later recused himself from other votes because the plan was backed by Paso del Norte Group, which was led by O’Rourke’s father-in-law. The plan ultimately failed after a public outcry.

“He was putting his political career above working-class Mexican American families and neighborhoods,” Renteria said. “Since then, I haven’t supported him.”

A Democrat, Renteria said she plans to leave the governor’s section blank on her ballot if O’Rourke is the nominee, something she has done in the past when he was the nominee.

Jaime Abeytia, a political blogger in El Paso, said there has always been a group of naysayers who don’t support O’Rourke in part because he is a rich white guy with a Spanish nickname. Abeytia said he hopes voters don’t continue to hold the 2006 development plan against him, saying a “good leader” can learn from past mistakes and evolve.

He said he voted for then-U.S. Rep. Silvestre Reyes over O’Rourke in the 2012 primary because Reyes was the longtime Democrat who represented El Paso in Congress. But O’Rourke’s stance on legalizing gay marriage at the time is what changed Abeytia’s mind.

“I do believe he has a way of energizing voters across different sectors,” Abeytia said.

In his announcement, O’Rourke said his time as a council member and congressman has prepared him for his latest campaign, saying “these experiences have taught me that we are most successful when we keep the focus on people.”

Some who have worked with and known O’Rourke since his city council days praised him, saying he would be a great governor and a much-needed change after three decades of Republican governors. They say O’Rourke was a progressive ahead of his time, taking stances on some issues that are now part of the Democratic Party’s platform, such as government employee benefits for same-sex partners. O’Rourke made this push on the council at a time when same-sex marriage was illegal.

“He was always a visionary of what El Paso was in need of,” said Dora Oaxaca, the chair of El Paso County’s Democratic Party.

In 2009, O’Rourke, who has expressed support in legalizing the recreational use of marijuana, introduced a resolution to start a debate “on ending the prohibition of narcotics” and expressing support for Ciudad Juárez, where thousands had died as a result of the war on drugs and which has seen violent fights between Mexico’s drug cartels. The city council unanimously approved the resolution, but it was vetoed by the mayor at the time, sparking a debate within the local Democratic Party, said Steve Ortega, who served on the city council with O’Rourke.

“I have no doubt that he’s going to put his energy in [running for governor] and provide a stark contrast to what we have right now in Austin,” Ortega said, adding that O’Rourke would also “provide a voice that understands the border dynamics” to a statewide audience “rather than use it as a wedge issue.”

During his failed presidential run, O’Rourke frequently countered Trump’s anti-immigration rhetoric. Raised in a Hispanic-majority city, O’Rourke learned Spanish and has used it to his advantage in reaching out to voters.

“He’s debunked a lot of negative myths and misinformation about the border and in El Paso,” Oaxaca said. “He’s always stood with our community. Beto es verdad, which means he is real, he is what Texas needs.”

“Through the power grid outage, mismanagement of the COVID-19 pandemic, and refusal to expand healthcare in Texas, Greg Abbott’s failures have cost Texans their lives,” Escobar said in a statement sent from her campaign manager. “It’s time we have a Governor who is ready to serve Texans and meet the needs of our state. I’m happy to support Beto in his run for Governor and look forward to the election ahead.”