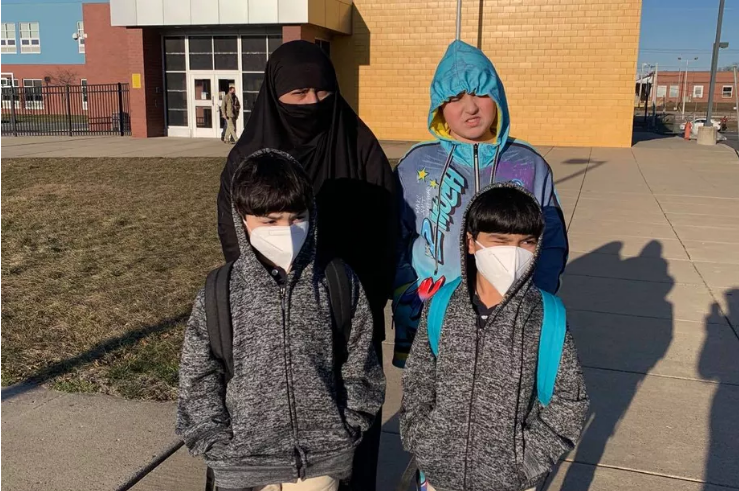 After nearly a year at home, some early-grade students return to Philadelphia schools

Some of Philadelphia’s youngest students returned to their classrooms Monday morning after almost a year of remote learning amid the coronavirus pandemic. The students are returning in three phases beginning with 53 schools.

A small number of students at Juniata Park Academy filed into their building in North Philadelphia to be greeted by Mayor Jim Kenney and Superintendent William Hite on their first day of in-person instruction.

The estimated 1,325 students who returned to district schools Monday came back to a learning environment slightly different than the one they left last year. They now undergo a symptom screening and wear masks. They also see new setups in classrooms and bathrooms to promote social distancing and offices with plexiglass partitions. And at lunch, students sit where decals are placed in the cafeteria so they are not sitting face-to-face.

When all 152 buildings with prekindergarten through second grade students are open — possibly by March 22 — about 9,000 students who selected hybrid learning would attend in-person school two days a week under the plan, engaging in remote learning the other three days.

The shift to remote learning for early-grade students has exacerbated concerns across the city on long-term effects on academic achievement.  And the availability of vaccines for teachers and staff and concerns about school ventilation systems, have been hot button issues in the school district’s efforts to reopen for some in-person learning.

After prodding from the district and the teachers union, city health officials pushed school staff higher on the priority list for vaccinations, and Children’s Hospital of Philadelphia stepped in to administer the vaccines. On Thursday, Kenney and Hite announced that all school staff could be vaccinated within the next four weeks.

Monday’s reopening is the fourth time since September that the district has attempted to return to some in-person learning. After two false starts in September and November, due to opposition from parents and teachers and a surge in cases of the coronavirus, Hite set a timetable in January for teachers to return on Feb. 8 and students on Feb. 22.

However, the Philadelphia Federation of Teachers invoked a mediation process to make sure the district met all the safety requirements laid out in a “memorandum of agreement” signed in the fall.

The mediation dragged on for weeks as the union sought to verify compliance with detailed protocols including ample hand sanitizer, signs for social distancing, plexiglass barriers in offices, and plans for coronavirus testing.

But the biggest controversy centered on whether schools and classrooms had adequate ventilation. And the district’s purchase of 3,000 window fans to aid air circulation in 32 schools became the subject of ridicule. The fans were marked for residential use, and union officials said they were inadequate and should be used to pull potentially contaminated air out of the window, not bring in fresh air.

Teachers protested, and Hite threatened disciplinary action. After an impasse of nearly three weeks and an agreement that Kenney helped broker, the fans were removed and the district bought air purifiers. The PFT’s environmental scientist, Jerry Roseman, is checking the safety of schools to certify that they are safe to reopen.

Many teachers who have been back in their classrooms starting last Wednesday, however, are complaining on social media of unsanitary conditions and schools that are unprepared and still unsafe for in-person learning. They have been demanding more information about all the schools due to reopen.

Today, the district and union are expected to announce the next group of schools that will resume hybrid learning starting next Monday March 15. Teachers in these schools will be due back Wednesday.

This article was originally posted on After nearly a year at home, some early-grade students return to Philadelphia schools