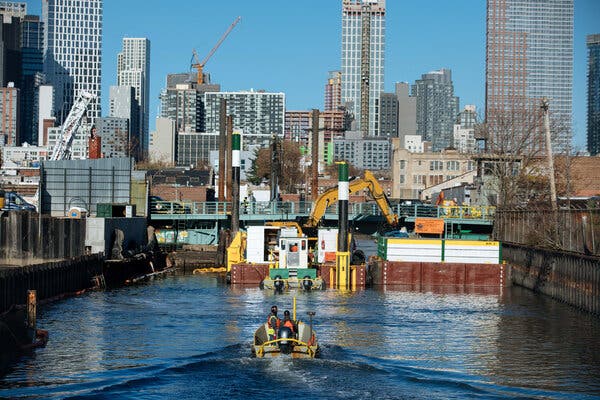 The City Council approved rezoning Brooklyn’s Gowanus Tuesday to create thousands of affordable housing units in the neighborhood — setting the stage for an upcoming vote on a similar overhaul for SoHo and NoHo.

Meanwhile, the Council also OK’d a proposal to expand the New York Blood Center’s Upper East Side headquarters to create a life-sciences research hub near some of the city’s top hospitals.

Mayor Bill de Blasio, who supported the Blood Center plan, spearheaded the reshaping of Gowanus in a bid to use rezoning to help generate much-needed affordable housing in largely white and well-off neighborhoods. A vote is expected on the SoHo/NoHo proposal next month as de Blasio nears the end of his second term in City Hall.

“This is exactly the kind of thing we came here to do,” de Blasio said Tuesday morning, hours before the Council moves. “And it’s such a great pleasure to do this right as we’re finishing these eight years together.”

The Gowanus plan calls for the creation of 8,500 total new homes, with 3,000 of them permanently affordable. The deal also includes a city promise of $200 million for improvements to the Wyckoff Gardens and Gowanus public housing developments.

The measure passed 47 to 1. Term-limited Councilmember Carlos Menchaca (D-Brooklyn) voted against the plan.

Councilmember Brad Lander (D-Brooklyn), the city’s incoming comptroller, said the passage marked a win for the city — and for community input.

“The Gowanus rezoning shows that it is possible for New Yorkers to plan together for a more inclusive and sustainable city,” said Lander, who represents much of Gowanus. “That many people will accept growth in their neighborhood if they are a real part of the planning process and see it as a way to achieve shared values.”

‘See You in Court’

The largest rezoning over the last eight years came as the SoHo/NoHo proposal entered late-stage negotiations.

The Lower Manhattan neighborhoods haven’t been rezoned since 1971, when artists living in cheap industrial lofts looked to legalize their homes.

The area is now one of the wealthiest and least diverse in New York, according to city data. The rezoning plan aims to add at least 900 apartments for low-income New Yorkers through the city’s Mandatory Inclusionary Housing program.

Foes fear the rezoning would allow too much density in the largely landmarked area and bring big-box retail shops.

Councilmembers Carlina Rivera and Margaret Chin, who represent the neighborhoods, are working to ensure that enough affordable housing is guaranteed, according to Speaker Corey Johnson.

The mayor’s rezoning plans have not been easy to pass and have faced community opposition. A judge had temporarily delayed the certification of the Gowanus proposal’s application earlier this year after a group of neighborhood activists filed a lawsuit.

The group, Voice of Gowanus, said Tuesday it planned to file another suit against the city after retaining environmental lawyer Richard Lippes, who represented the Love Canal families in the 1970s. The polluted Gowanus Canal is a Superfund site.

“​​As Brad Lander celebrates a massive violation of state and federal law today — one that endangers the safety of our community and the environment, and bends to the interests of big real estate — we note that a certain lady has not yet sung when it comes to the Gowanus rezoning,” a Voice of Gowanus representative wrote in a statement, adding: “See you in court.”

Lander credited opponents with making the plan more inclusive and stronger, helping gain additional community benefits. “People who live there now benefit from the set of investments,” he said.

The New York Blood Center expansion approval came despite opposition from the neighborhood and the Council member who represents the area, Ben Kallos.

The developer plans to build a tower on the six-story center’s current East 67th Street site that would provide both the current blood services for nearby hospitals while offering space for life-sciences companies.

Kallos and other community members had opposed the building’s originally proposed height, which was knocked down by 100 feet, to 233 feet, before the project was voted on. Opponents, whose last-minute legal bid to stop the vote failed, contend the planned building would cast shadows across a local school and park.

Kallos, whose term ends Dec. 31, said the vote signified a marked shift against member deference —  the Council tradition of generally following the wishes of the lawmaker who represents the area. The measure passed 43 to 5.

“The local Council members don’t matter anymore and can no longer represent their communities,” Kallos said.

Council members who support the project said the planned science center will provide space for research on many health issues, including sickle cell disease, which disproportionately affects Black people.

Johnson said the proposal is “important for the future of New York City because of the importance of the blood center.”

This article was originally posted on After Gowanus Overhaul and Blood Center Expansion Wins, de Blasio Turns to Reshaping SoHo