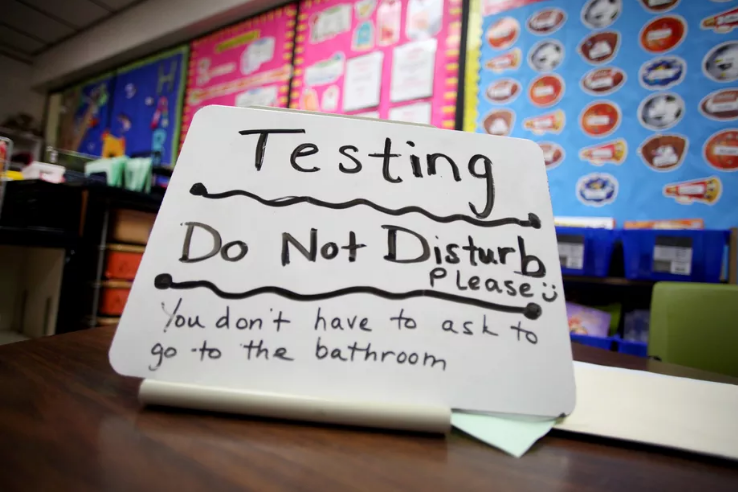 The standardized tests must go on, the Biden administration announced last week. But that hasn’t stopped the pushback.

Officials in a handful of states are still challenging state testing requirements. Some school leaders are calling on parents to have their children opt out of the exams. And testing critics, including some elected officials and education groups, are mobilizing.

“To administer a standardized test, I think it’s a bad decision,” said Rep. Jamaal Bowman, who was previously a New York City middle school principal and participated in the testing opt out movement. “It’s not rooted in the reality of what we’re dealing with right now.”

The flurry of activity makes clear that testing critics see this as a window of opportunity, and highlights the continued uncertainty about how state tests will be given and how many students will participate. Federal officials haven’t yet told states precisely how they will be able to change their usual testing procedures because of the pandemic, even as the typical testing window begins shortly.

What the federal education department has said came in a letter to state leaders last week. Acting assistant education secretary Ian Rosenblum said testing was critical to understand the pandemic’s impact and give parents information about their children’s progress. Unlike last year, the department would not be “inviting blanket waivers” of federally required standardized tests, which include math and reading exams in grades three through eight.

Rosenblum’s letter did say the department would allow for some adjustments, like delaying the tests until the fall or administering them online. States can also waive provisions that hold schools accountable for low scores.

Rosenblum offered an opening for other changes. “We also recognize that individual states may need additional assessment flexibility based on the specific circumstances,” he wrote.

The department’s decision to stick with testing won praise from some education and civil rights groups last week. Many states, including Florida, Indiana, and Tennessee, had been moving forward with plans to test students in person this spring even before the department’s announcement.

Officials elsewhere have focused on how they might win that additional flexibility, or appear to have disregarded the department’s clear language entirely.

The day after the department’s letter, Washington D.C.’s interim state superintendent announced that she would seek a federal waiver. “Ultimately, we decided that moving to cancel these assessments in the 2020-21 school year was the best course of action for our education community,” wrote Shana Young. A spokesperson for her office said Young wants to submit results of school-based tests instead, but did not explain why the District thinks it could get a waiver from the feds.

In Colorado, some state legislators are also trying to suspend state testing, although an advisory opinion issued by an attorney for the state warned that the federal guidance “plainly suggests that it will not entertain such a waiver request.” Two Pennsylvania lawmakers are pushing a similar bill.

Washington state’s schools chief says he’ll ask for permission to test a smaller sample of students — just 30,000 or so of the 700,000 who would normally take the test.

Michigan’s schools superintendent said he still hopes to convince federal officials to allow the state to rely on locally chosen exams rather than statewide standardized tests.

Asked whether the department would consider allowing local tests, a spokesperson for the U.S. Department of Education said only that officials are reviewing requests that have been submitted.

Critics of testing have also not given up trying to influence public officials and parents. The Network for Public Education, which opposes standardized testing, is circulating a petition calling for testing to be cancelled and encouraging supporters to call the education department. The California Teachers Association, a large labor union, is pushing for the state to seek a testing waiver.

Testing experts have warned that it won’t be easy to make sense of assessment results if an unusually high number of students don’t take the tests, although some have proposed solutions.

Polling suggests that parent opinion is divided, and support for testing depends on how the survey is worded. One recent poll found that 52% of parents are in favor of statewide exams this year, while 41% are against. A substantial share of students are continuing to learn remotely, suggesting their parents may be reluctant to send them into school buildings for testing.

“Whatever parents decide to do — that is what is going to happen, whether the administration is on board with them or not,” said Bowman.

Bowman said that he and other members of Congress have heard from constituents opposed to the decision. He said he hopes to speak to Education Secretary Miguel Cardona about the issue.

But some of Bowman’s Democratic colleagues are staunch supporters of the decision to test.

This article was originally posted on After feds say tests still required, critics mobilize and states look for loopholes