Home » Across Texas, elation and caution as COVID-19 restrictions end after a year 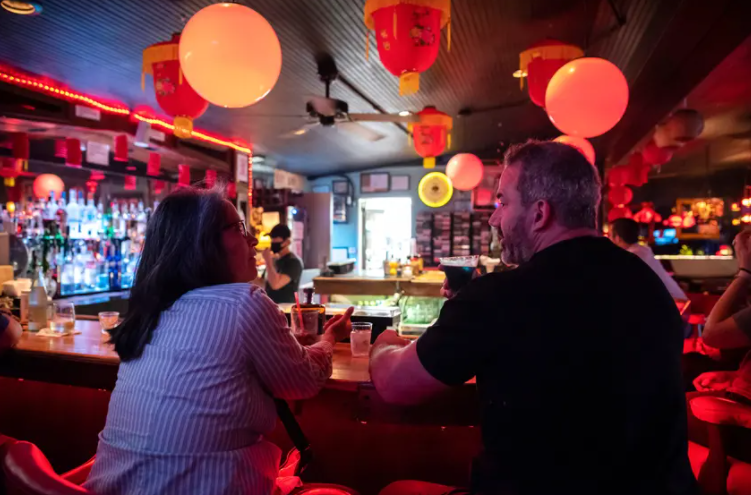 Across Texas, elation and caution as COVID-19 restrictions end after a year

For the last year, the 34-year-old mom has been masking up and avoiding taking her children to their favorite places in Hockley due to pandemic closures.

But today, the statewide mask mandate and coronavirus restrictions on business are lifted, and Espinosa sees life returning to normal in her rural home in unincorporated Harris County.

No more waiting for a seat at a restaurant due to low capacity, a situation normally unheard of in her town of 16,000 residents. No more avoiding places like Monkey Joe’s, where her children can expend their energy in the bouncy castles and play video games without restrictions.

No more struggling to breathe through her mask as she recovers from pneumonia — for her, that’s the biggest perk of Gov. Greg Abbott’s decision to lift pandemic restrictions starting Wednesday.

“I’m just excited not to have to wear a mask,” she said. “I know it’s an unpopular opinion, but I feel really strongly about that.”

For the first time since last summer, Texans woke up Wednesday to new possibilities as restaurants and bars were free to operate at 100% capacity, local communities, businesses and schools were authorized to drop mask requirements and concerts and events are once again allowed — at least according to state guidelines.

Under Abbott’s order, counties and cities are required to drop local restrictions — although they can, and many have, kept restrictions in place on city or county property.

Hours after the restrictions were lifted, businesses and venues began their return to some degree of pre-COVID-19 operations.

The Texas Rangers announced Wednesday that they would allow 100% capacity at the new Globe Life Field for their home opener on April 5 — the first time the baseball team will play at the park with fans in attendance — while also requiring fans to wear masks. After the home opener, the team will reduce capacity and follow social distancing guidelines.

Texas state parks also began the process of opening to 100% capacity, according to a statement by Director Rodney Franklin.

“While we know that we are not yet ‘out of the woods,’” his statement said, “There are reasons to be optimistic.”

Most Texans have not yet been vaccinated — as of Tuesday, about 16% of the Texas population had received at least one dose of a vaccine — and almost 200 residents are dying from the virus each day, but the numbers vary in different regions of the state. So on the local level, a newly “open” state will likely look very different in rural towns and suburban neighborhoods compared to more populous areas and coronavirus hot spots, residents and business owners say.

Officials in the state’s five most populous counties, and in some smaller metro areas where COVID-19 deaths were particularly high, came out mostly against Abbott’s order relaxing the restrictions, calling it “premature” and “wishful thinking” and “a huge mistake.”

On Monday, Houston-area officials pressured a local bar into cancelling its planned “mask-off party” this week. On Tuesday, Travis County and Austin officials announced the city would keep its strict pandemic restrictions and continue mandating masks inside businesses — threatening trespassing tickets for customers who refuse to leave after declining to wear a mask. Texas Attorney General Ken Paxton’s office has threatened to sue them if the business restrictions are not dropped.

Meanwhile, in suburban Montgomery County, local leaders and lawmakers celebrated the decision, with County Judge Mark Keough, who has criticized the mandates at various points in the past year, promising never to return to countywide restrictions of any kind for its 600,000 residents.

And in Texas’ more isolated communities, life may not look that different at all, locals said.

“Several [local businesses] I don’t think ever closed, the ones who believe it’s all a hoax or that it’s not real,” said Gilda Morales, a county commissioner in the Culberson County seat of Van Horn, a community of about 2,000 in West Texas where local officials still require masks in city and county buildings.

Vance Cottrell, who owns Van Horn Auto Supply and a local restaurant, said local residents for the most part didn’t wear masks even during the statewide restrictions.

“Our store here, we don’t have too many people coming in wearing masks,” he said. “None of our employees wear masks. I don’t wear one personally. … We don’t have anybody really sick right now [in the local hospital], though. If we had a bunch of people really sick, I guess we’d be looking at it differently.”

Dropping the mask — or not

A few days after Abbott announced his order, Potter County Judge Nancy Tanner said employees were “elated” when she dropped mask requirements in county buildings, though they are still required in city buildings in Amarillo, the county seat, which was hard hit by the virus.

“I told them that they can take their mask off to come in the building again, like we used to do in the good old days,” she said. “They were very, very happy. But I also told them to be smart and to stay home if you’re sick, and the usual stuff that went along with the COVID quarantine time, and [if] you feel like you need to wear a mask, there’s not going to be any judging here.”

In San Antonio, masks will still be required in city buildings and on the Riverwalk, and Bexar County officials are weighing to what degree they can enforce restrictions without violating Abbott’s decision.

Tarrant County Judge Glen Whitley dropped the county’s own mask mandate and business restrictions altogether on the day Abbott made his announcement last week rather than wait, saying it was to avoid confusion.

Sarah ten Brink, who owns Sarah’s Place in West Fort Worth, will still require her employees to wear masks and “strongly suggest” to customers that they, too, wear them to come inside the cozy, 98-person capacity watering hole.

At the northern edge of the Texas Hill Country, Hico resident Tracy Love has no plans to wear a mask voluntarily — and hasn’t much for the past year anyway — in the stuffy, thick air inside the cattle auction barn where she works.

“I see less people wearing them, but some businesses are still requiring you to wear them in their place of business,” she said. “Like H-E-B. But I never wore one in there anyway.”

In the Rio Grande Valley, restaurant owner Elizabeth Trevino will continue mask requirements for customers and employees at the popular La Playa Mexican Cafe in Harlingen. Not enough Texans are vaccinated yet to be protected, she said, and “I care about my customers and my employees so much, and that’s the most important thing.

“The response to that, you’re not going to believe it, but it has been very positive,” she said.

And in a moment of irony, the Lubbock restaurant owner where Abbott made his announcement in a celebratory press conference told KUT on Wednesday that his restaurant, Montelongo’s, would continue requiring its customers to wear masks and would not yet open to full capacity.

For the first time since last summer, businesses are able to decide on their own how many people they can serve at a time. But owners are weighing the benefits of returning to full capacity against the risks that large crowds could pose to employees and customers alike.

Morales, the Culberson County commissioner who also owns The Cactus Cantina and Grill, said her restaurant, which has operated with only curbside service and delivery for a year, will reopen indoor dining with reduced capacity in early April if local COVID-19 numbers stay low.

Morales, who is also a nurse practitioner, said new cases at her clinic have dropped to zero in the last two weeks after several months of seeing five or six new cases each day.

Sarah’s Place in Fort Worth pivoted to serving food last year and was able to reopen at 50% capacity after being closed for six months, when Abbott ordered all bars to close last summer. The state later allowed them to reopen as long as they made at least half of their money on food.

When Tarrant County dropped its restrictions last week, Sarah’s Place bumped its capacity up to 75% on Saturday night for the first time in a year.

It still felt too crowded, ten Brink said. But it’s a good chance to bounce back financially after being 10 days away from going out of business last summer.

“The [sales] numbers are almost the same” as they were pre-pandemic, ten Brink said. “People are getting better service [without the capacity crowd] and the bartenders say they can actually talk to people.”

Austin attorney Kareem Hajjar, whose firm represents some 3,000 bars and restaurants across Texas, said he is hearing from most of his clients that they “plan to do some type of modification, especially on interior dining” even though restrictions have ended.

Owners in big cities are planning to ramp up capacity slowly as more people get vaccinated, as customer demands change and as virus numbers continue to go down, if they do, he said.

His clients in rural towns, where residents seem more willing to go without masks and less willing to patronize places that require them, have been the ones to say “great, 100%, let’s go,” he said.

Jackie Ryan, who works at a Kroger in Cedar Hill, just outside Dallas, supports wearing masks in public while the pandemic continues, but said she’s happy that businesses can open at 100% capacity.

“Once it all opens up, it is really going to take some getting used to, to walk into a store or restaurant that is at capacity,” Ryan said. “All those people in one room breathing the same air will really be a shock and scary experience.”

This article was originally posted on Across Texas, elation and caution as COVID-19 restrictions end after a year