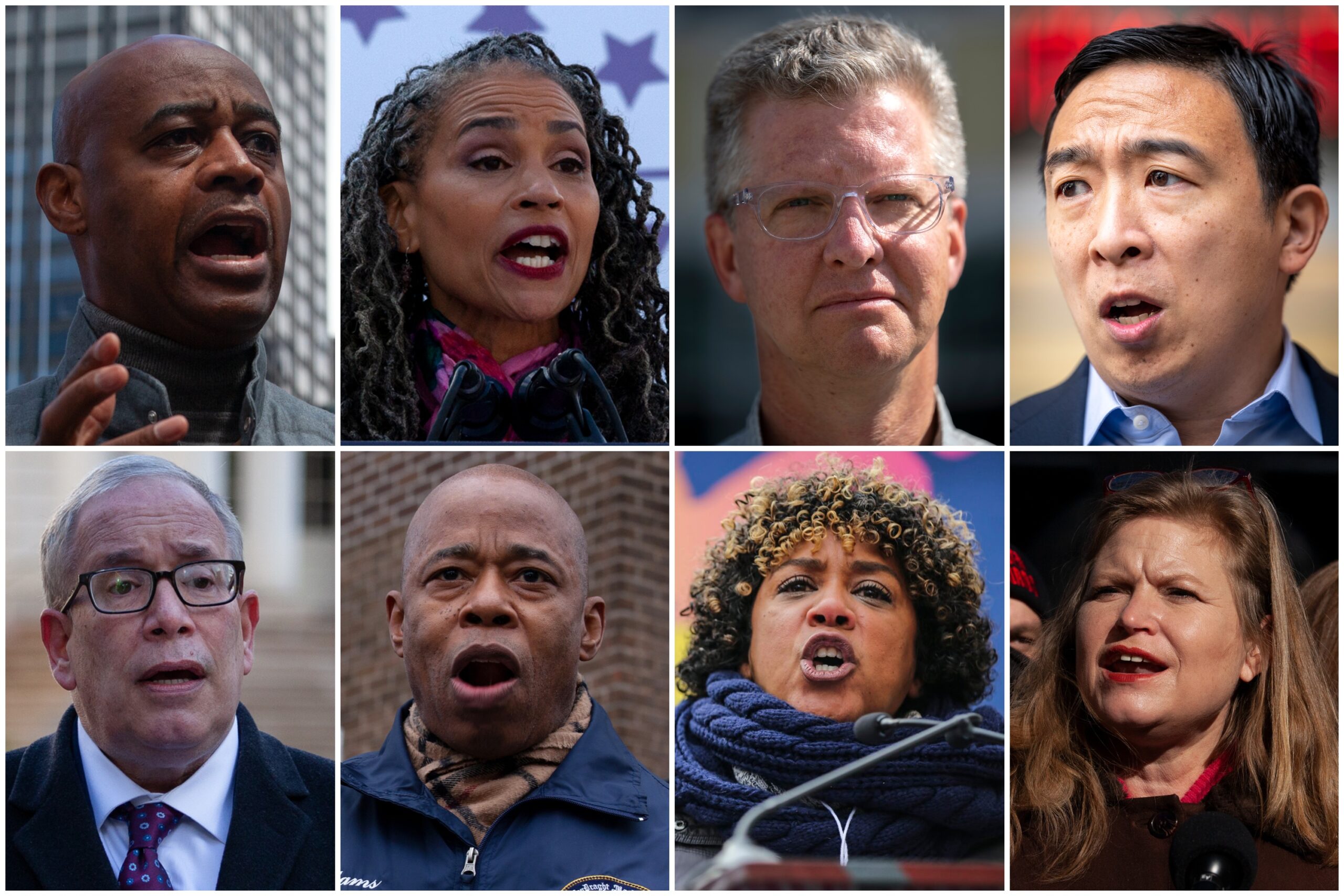 A Third-Party Run for Mayor in New York? Here’s How It Could Happen

In deep-blue New York City, chances are high that the Democratic winner of the June 22 primaries for mayor will go on to clinch the Nov. 2 general election.

But in an odd political year — with a campaign season shortened by a new primary date, ranked choice voting in the mix and voters distracted by the historic challenges of the past year — is there another possibility outside the major parties?

In Staten Island, a candidate for borough president is opting for that route — creating a new party line with a Trumpian-sounding name and drawing fire from fellow Democrats.

In the mayor’s race, political insiders said they don’t think an independent or third-party campaign is likely — but they aren’t ruling it out, either, even as time on the option is running out.

“Because the timetable has changed, voters are not really ready for a June primary,” said Yvette Buckner, political strategist and vice chair at the political organizing group 21 in ’21. After the primary, “voters may want another bite at the apple.”

“New York is still a Democratic town, and we do vote Democratic, but I think there may be that opportunity,” she added.

There are two pathways for a candidate to run for mayor in 2021 without winning a primary in June: getting on the general election ballot as an independent candidate, or running with one of New York’s two remaining third-party ballot lines — the Working Families Party and Conservative Party.

Some Candidates Weigh In

THE CITY asked the major Democratic candidates whether they are considering either option. Representatives for Kathryn Garcia, Maya Wiley, Scott Stringer and Andrew Yang said their candidates are not, and will not pursue either course if they don’t win the Democratic primary next month.

Dianne Morales, who has the backing of the WFP along with Wiley, “hasn’t discussed the possibility of a third-party run post-primary,” said Lauren Liles, a campaign spokesperson.

Shaun Donovan ruled out an independent bid, saying in a statement that he “will only run as a progressive Democrat” and “the only independent parties I would consider running on a line with — in concert as the Democratic nominee — would be the Working Families and Green Parties, for whom I have great respect.” (The Green Party does not currently have a ballot line in New York.)

No reply came from Eric Adams, a one-time Republican, or Ray McGuire, who respectively have $7.8 million and $3.6 million in their campaign coffers, according to the latest records from the Campaign Finance Board — the first and fourth highest amounts of any candidate in the race.

An independent expenditure group that has raised nearly $6 million to spend has also pledged its support for McGuire.

Running on a third-party line in addition to a major party slot has been fairly common in city history.

During his 2009 re-election run for mayor against Democrat Bill Thompson, then-Republican Mike Bloomberg contributed over $1 million to the now-defunct Independence Party, which gave him its ballot line. The billionaire mogul spent more than $100 million of his own fortune seeking his rule-bending third term in the most expensive campaign in the city’s history.

But embarking on a successful third-party-only run would require millions of dollars and an extraordinary amount of coordination, said Doug Muzzio.

“You’re talking about someone who is sui generis,” Muzzio said.

“The game is structured for a two-party run. It’s loaded in that direction. And the practical difficulty is in order to run a campaign, you need money, organization and message,” Muzzio added. “And what would be the message of a third-party movement? Can they raise sufficient money? And can they develop an organization that can turn out the vote?”

If a candidate were to launch an independent run for mayor, they’d have more time between the primary and the general to campaign than in previous years. New York’s primary had long been held in September but was moved back to June because of voting reforms passed by the state legislature in 2019.

To run independently, a candidate would have to lock in that option quickly, election experts told THE CITY. Getting on the ballot independently requires 3,750 signatures from voters — collected in a process called petitioning — that must be submitted to the Board of Elections by May 25.

‘Sticking It to the Democrats’

That signature-gathering hurdle goes for all races in the city, not just mayor. In Staten Island, Democratic candidate for borough president Mark Murphy is petitioning to reserve the option of an independent run in that race, THE CITY recently reported.

Murphy and two other local candidates — including former Councilmember Sal Albanese, who ran against de Blasio in 2017 on the Reform Party line — are collecting signatures to form an independent line branded “Staten Island First.”

Whether or not Murphy wins his primary election, his name will appear on the ballot in November if he delivers 1,750 valid signatures to the BOE.

The four other Democratic candidates in the borough president primary fear that Murphy, a party-backed candidate whose father served as a congressman in the borough, will divide the vote in a general election race.

The coalition of candidates plans to call on Murphy at a new conference Tuesday to suspend his third-party efforts and urge him to throw his support behind the Democratic nominee.

“That is a dog whistle to a base that he’s trying to rile up,” said Vargas. “He’s refusing to accept the Democratic primary, specifically under the Democratic banner and he should be held accountable under this banner, because he knows very well that Donald Trump used this.”

While Democrats haven’t won Borough Hall since 1990, this election cycle is the first in more than a decade where multiple candidates have raised substantial amounts of campaign cash.

Murphy and Albanese, who ran against Mayor Bill de Blasio in 2017, say that the party line was established to move past major party labels and signal that they’d prioritize Staten Island’s needs above all else.

Murphy signaled he would stick to the third-party line, no matter what the outcome of the June primary.

“The borough president is Staten Island’s chief advocate and they must advance Staten Island’s interests above that of the rest of the city,” Murphy said in a statement. “The very essence of this job is to put Staten Island first, so that we are not the ‘forgotten borough’ any longer. It’s disappointing that my opponents think this is a bad thing.”

Dr. Raja Flores is collecting signatures, too, as he makes an independent bid for mayor.

The first-time candidate, a thoracic surgeon at Mt. Sinai Hospital, says he was galvanized to run from seeing the results of “bad policy” in the lungs of his patients — public housing tenants suffering from fungus infestations, or students who miss school because of severe asthma.

“A lot of what I’ve had to operate on are patients who have preventable illnesses. And, as a surgeon, I see them after the fact,” Flores, a native New Yorker, told THE CITY. “But what’s more important is to prevent them from getting to that point.”

Flores, who is not registered with a party, is gathering petitions now with a corps of student volunteers and is confident he’ll net the necessary number of signatures to get on the ballot. He sees an opening this year for a candidate who is not beholden to either major party, which he believes have each failed to solve the city’s most entrenched problems.

Top of mind for him are the failures of Democrats or Republicans to contend with the chronic issues with the New York City Housing Authority.

“My sense is that both parties are compromised,” he said. “What happened in NYCHA over the past several decades — it just continued to get worse.”

A Two (Other) Party Town

Barring an independent run, the other alternative path to City Hall is through one of New York’s third parties with a ballot line. Following eligibility changes made last year in Albany pushed by Gov. Andrew Cuomo, only the WFP and Conservative parties retained spots on New York ballots.

The Conservative Party’s line is already filled by mayoral candidate and retired police officer Bill Pepitone, according to BOE records and previous reporting.

The Working Families Party line is also filled — by a placeholder who is destined to be booted off the ballot before voting day in November.

Deborah Axt, the former leader of the organizing group Make the Road, is currently the official nominee on the WFP line, according to BOE records.

What typically happens, Steiner said, is the party will nominate their placeholder to judgeship in a very Republican area of upstate New York where they have no hope of winning.

Why? Because there are only three ways to get off the ballot at this stage in the campaign, she said: by dying, moving out of state or being nominated to a judicial position.

“They go to places where the Democrats haven’t won that seat in so long that they don’t even put somebody on the ballot,” Steiner said.

“Her fate is to be replaced,” she said of Axt.

It’s unclear who will take her spot. The WFP initially endorsed Stringer, Wiley and Morales, then rescinded its support for Stringer in light of sexual harassment allegations against him by a former campaign worker. Stringer has denied any wrongdoing, saying that the pair had a consensual relationship roughly two decades ago.

The WFP hasn’t yet determined who will take the party’s ballot line in the general election. But in a statement to THE CITY, Sochie Nnaemeka, the head of the WFP in New York said the party “is laser-focused on electing a true progressive champion as mayor on June 22, along with the most progressive, representative City Council in this city’s history, by supporting Dianne Morales and Maya Wiley.”

This article was originally posted on A Third-Party Run for Mayor in New York? Here’s How It Could Happen