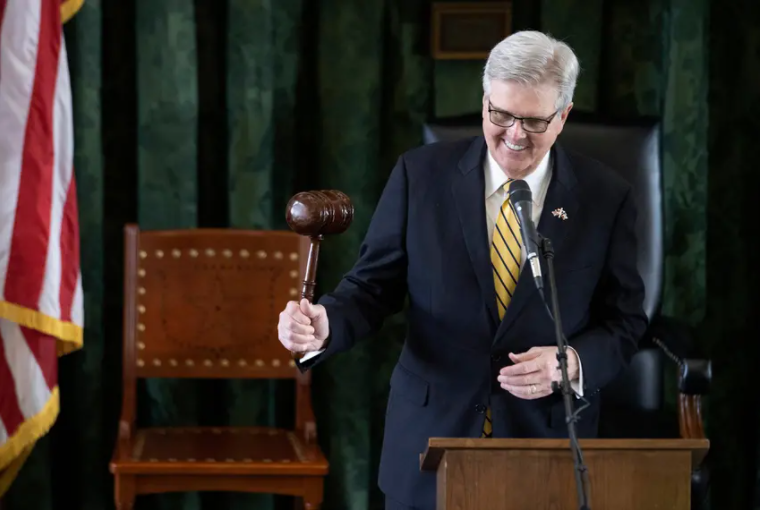 A Star-Spangled culture war in Texas

The politician who championed the “bathroom bill” in the Texas Legislature in 2017 is now singing “The Star-Spangled Banner.”

Lt. Gov. Dan Patrick unfurled the first of his priority bills this week, in reaction to news that the NBA’s Dallas Mavericks had stopped playing the national anthem before home games.

That went on for 13 games before anyone noticed, according to The Athletic. But when they noticed, they really noticed. The news traveled all the way to the lieutenant governor, and before you could say “dawn’s early light,” he had proposed the “Star Spangled Banner Protection Act.”

It hasn’t been filed yet, but it would require the playing of the anthem at all events that receive public funding. Presumably, that would include sessions of the House and Senate, which start with prayers, and pledges to the U.S. and Texas flags, but no anthem.

“It is hard to believe this could happen in Texas, but Mark Cuban’s actions of yesterday made it clear that we must specify that in Texas we play the national anthem before all major events,” Patrick said in a news release. “In this time when so many things divide us, sports are one thing that bring us together — right, left, Black, white and brown.”

Cuban is the owner of the Mavericks.

“We respect and always have respected the passion people have for the anthem and our country,” Cuban tweeted. “But we also loudly hear the voices of those who feel that the anthem does not represent them. We feel that their voices need to be respected and heard, because they have not been. Going forward, our hope is that people will take the same passion they have for this issue and apply the same amount of energy to listen to those who feel differently from them.”

The problem, as far as professional basketball is concerned, has already been solved. NBA Commissioner Adam Silver said Wednesday that the league’s teams will be required to play the national anthem before each game.

That was after Patrick had a chance to tweet that Cuban’s decision was “a slap in the face to every American & an embarrassment to Texas. Sell the franchise & some Texas Patriots will buy it. We ARE the land of free & the home of the brave.”

The state’s culture wars are back, led by their most prominent warrior. In 2017, Patrick led the unsuccessful, session-dominating effort to prevent transgender Texans from using restrooms and other public facilities that match their gender. It was a divisive fight that fired up voters and activists who were variously delighted and outraged at the proposal. And it established the understated theme for the 2019 legislative session that followed: “We’re not messing with things like the bathroom bill this time.”

That’s all behind us now. While it’s dealing with a pandemic, economic troubles, police behavior and funding, election and voting laws, and all the rest, the Texas Legislature is also going to discuss regulating the playing of the national anthem.

Patrick has kept his trap shut for the first month of the five-month regular session, buttoning his lip about the recount of the 2020 votes for his friend, Donald Trump, staying out of the news around the siege of the U.S. Capitol and holding his silence as Gov. Greg Abbott laid out his own priorities for the current session.

The lieutenant governor poked his head up at the beginning of the legislative session to make sure Republicans in the Senate can get things done without Democratic help when need be. But he has been uncharacteristically quiet.

Until, that is, he became aware of the absence of the sound of music. He was already working on presenting a list of legislation he wants the Senate to work on, but jumped at the prospect of a culture battle over the anthem and Cuban.

The man who brought you the bathroom bill is back, starting the game with a call for all to rise for the playing of the nation’s fight song.