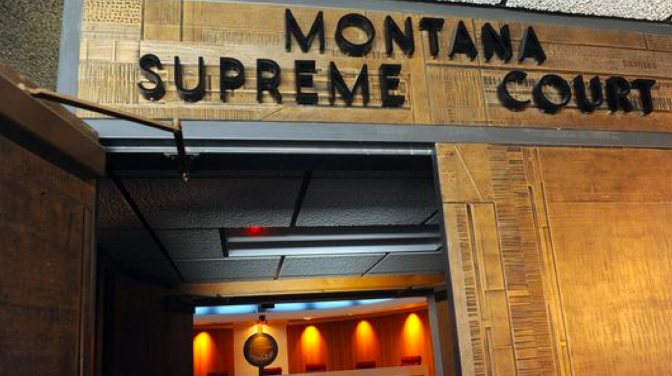 Opponents of a bill to adjust how Montana elects Supreme Court justices say it’s an attempt by well-placed Republicans to stack the court, while the sponsor says the change is necessary to better reflect the diversity of the state’s voters.

“I think it would help get our Supreme Court a little more aligned with our electorate,” said Rep. Barry Usher, R-Roundup, the sponsor of House Bill 325, during a hearing before the Montana State House Judiciary Committee earlier this month.

Given the recent history of Usher and a consultant involved in the bill’s drafting, that stated motive has come under scrutiny. Both Usher and bill consultant Jake Eaton served as treasurers of political action committees that spent hundreds of thousands of dollars in out-of-state money sourced from a national Republican political committee in Montana Supreme Court races in the last decade.

Mike Wheat, a retired Montana Supreme Court justice who served on the court from 2010 to 2017 and as a Democratic state senator from 2003 to 2007, called Usher’s proposal “judicial gerrymandering.”

“I think the Republican Party just thinks that [the Montana Supreme Court] is a little too liberal right now, and they’re looking for ways to consolidate a little more power to the conservative base,” Wheat told Montana Free Press.

HB 325 has passed the House and is awaiting an as yet unscheduled vote in the Senate. If it passes, the bill will have to be ratified by Montana voters through a ballot referendum in 2022.

Currently, all Montana Supreme Court justices are elected by a statewide vote and serve eight-year terms. HB 325 would eliminate the current system by creating seven districts, with each district electing one justice. According to the bill, current justices would be assigned to the district number that corresponds with their seat number when next up for re-election.

In the bill’s Feb. 10 hearing in the House Judiciary Committee, Usher listed several reasons for supporting the measure, arguing that election-by-district would give Supreme Court candidates more interaction with voters, since they would be campaigning in a smaller geographic area.

Later in the hearing, Usher argued for the bill on the basis of geographical diversity, saying, “We all know that our farmers and ranchers to the east of Billings are different from Missoula or Flathead, and the core values of someone, whether it’s constitutional or not, the ideology of someone is based on their core values and their interpretation of the Constitution.”

HB 325, however, does not require judges to live in the districts they would nominally represent, a fact Wheat sees as undermining the representation argument. “That seems to defeat the whole purpose of having districts, doesn’t it?” Wheat said.

In an interview with MTFP, Usher said a residency requirement was omitted in order to distinguish HB 325 from its predecessor, Senate Bill 268, a nearly identical bill in 2011 generating a legislative referendum, LR 119, that was struck down by the Montana Supreme Court. Usher said he doesn’t see a conflict between the lack of a residency requirement and his argument that HB 325 would promote representation on the state Supreme Court from all corners of Montana.

The residency requirement was just one of the Montana Supreme Court’s several issues with LR 119. The decision also stated that election-by-district would “eliminate the right presently held by all Montana voters to select all seven justices of the Supreme Court.”

In an email on Nov. 16, 2020, Usher told HB 325’s drafter to refine the bill with Will Selph (a member of newly elected Attorney General Austin Knudsen’s transition team) and Eaton, saying, “I would like to defer to Jake Eaton and Will Selph to work on this — it is my understanding they might already have it ready for you?”

Eaton, who runs a Billings-based consulting firm called the Political Company and multiple affiliated businesses, is well-connected to several prominent Montana Republicans, and served as executive director of the state Republican Party from 2007 to 2008. He was Gov. Greg Gianforte’s campaign manager for his 2020 campaign, as well as chief strategist for Austin Knudsen’s successful campaign for state attorney general. He is currently contracted through May 21 as a senior adviser to Knudsen. Selph worked in the office of former Secretary of State Corey Stapleton, and is currently Knudsen’s chief of staff.

Eaton told MTFP there is no connection between his work for Gianforte and Knudsen and his work on HB 325. Eaton claimed the proposal would open Supreme Court elections to more contenders, arguing that campaigning in smaller districts rather than statewide will lead to more competitive elections and allow lesser-funded candidates to run competitive campaigns. Eaton said the task of raising the funds necessary to run a statewide campaign limits the field of potential candidates, adding that he views Montana’s contribution limits on donations to judicial campaigns as another restricting factor.

Al Smith, executive director of the Montana Trial Lawyers Association, refuted Eaton’s claims, saying that while the association has been involved in certain Montana Supreme Court elections since the 1990s by running independent expenditure campaigns through PACs on behalf of candidates, it is transparent about its involvement.

“We show where we get our money from and who we spend it on,” Smith said.

While the Trial Lawyers Association has spent significantly on Supreme Court elections in recent history — spending $519,000 on Mike Wheat’s candidacy in 2014 through two PACs — the PACs’ individual donors are disclosed.

Two complaints filed by Smith in 2016 with the Commissioner of Political Practices (COPP) reveal that Eaton and Usher not only share a hand in crafting HB 325 but an involvement with out-of-state dark money and judicial elections in Montana.

Jake Eaton is listed as the treasurer of the StopSetEmFreeSandefur.com Committee, which formed in September 2016 and spent $268,000 on mail and TV ads opposing Dirk Sandefur in his 2016 race against Kristen Juras, who is now Gianforte’s lieutenant governor, for the open Supreme Court seat vacated by retiring justice Patricia O’Brien Cotter. In its COPP filings, StopSetEmFreeSandefur listed MTPAC as the source of those funds, though MTPAC reported having only $252 in the bank at the time.

The maze of funding makes the sources of money spent on candidacies nearly impossible to trace. The RSLC funneled much of the $36.7 million it raised in 2014 into more than $11 million in contributions to political committees, parties and candidates and $5.6 million in transfers to national, state and local party organizations.

Lists of the top donors to the RSLC in 2014 are available, but due to the complex, layered spending structure, there is no way of knowing where the $400,000 that MTPAC received originated. In some cases there is yet another layer to the onion: RSLC’s top donor in 2014, at $3.16 million, was the U.S. Chamber of Commerce, the highest-spending lobbying group in the United States, which regularly spends roughly $100 million each year, and is not required to disclose donors due to its IRS status as a 501(c)(6).

The discrepancy between MTPAC’s and StopSetEmFreeSandefur’s financial filings was at the center of two COPP complaints filed in 2016 by the trial lawyers association’s Smith — one against MTPAC and one against StopSetEmFreeSandefur. The COPP’s decision in the case, which labeled the discrepancy a “blatant campaign practice failure-to-report violation,” revealed that “the $268,000 came from what was represented to be an entirely separate entity, called the Republican State Leadership Committee-Judicial Fairness Initiative.”

The money spent by Usher’s and Eaton’s committees totaled nearly $600,000 over two Montana Supreme Court elections, representing roughly 20% of all spending in those races. Smith told MTFP the ultimate sources of that money are practically untraceable since it was funneled through MTPAC and StopSetEmFreeSandefur. The closest estimation possible, he said, is a list of the top donors to the Republican State Leadership Committee, which in 2016 included the U.S. Chamber of Commerce, casino magnate Sheldon Adelson’s Las Vegas Sands, and tobacco giant Reynolds American.

“That’s something we’ve definitely seen play out in Montana, where there has been, in recent years, a flood of money into the state’s Supreme Court elections, a lot of it coming from special interests,” Bannon said.

In the 2012 Montana Supreme Court race between Laurie McKinnon and Ed Sheehy, a nonprofit called Montana Growth Network spent $121,065 supporting McKinnon (in 2018, the group was fined $30,000 by the COPP for reporting only $42,000 of that spending). In the year from 2011 to 2012, Montana Growth Network went from having $828 in the bank to $878,000. The nonprofit’s 14 donors included San Francisco billionaire Charles Schwab of the eponymous financial services corporation, who donated $200,000 personally and another $100,000 through an LLC he owned, and Atlanta-based billionaire James Cox Kennedy, the chairman of Cox Enterprises, a media, communications and automotive conglomerate. In 2012, Schwab and Kennedy were both involved in lawsuits challenging aspects of Montana’s stream access law as it applied to large estates each man owned in Montana. In 2014, the state Supreme Court ruled against Kennedy and upheld the stream access law by a 5-2 vote. McKinnon cast one of two dissenting votes.

Two years later, Mike Wheat’s race against Lawrence Van Dyke dwarfed the McKinnon-Sheehy figures. According to a report by the Brennan Center, outside spending skyrocketed to just under 75% of all money spent in the race, up from 27% in 2012, and totaling just over $1 million, while the candidates themselves spent $376,000.

Wheat said that spending had a toxic effect on the election, adding, “It was very negative, and this all goes back to Citizens United in my opinion, because I think all of this money is corrosive.”

This article was originally posted on A court divided?