Home » A Chicago teen was shot at school. Her family says officials need a plan to stem gun violence. 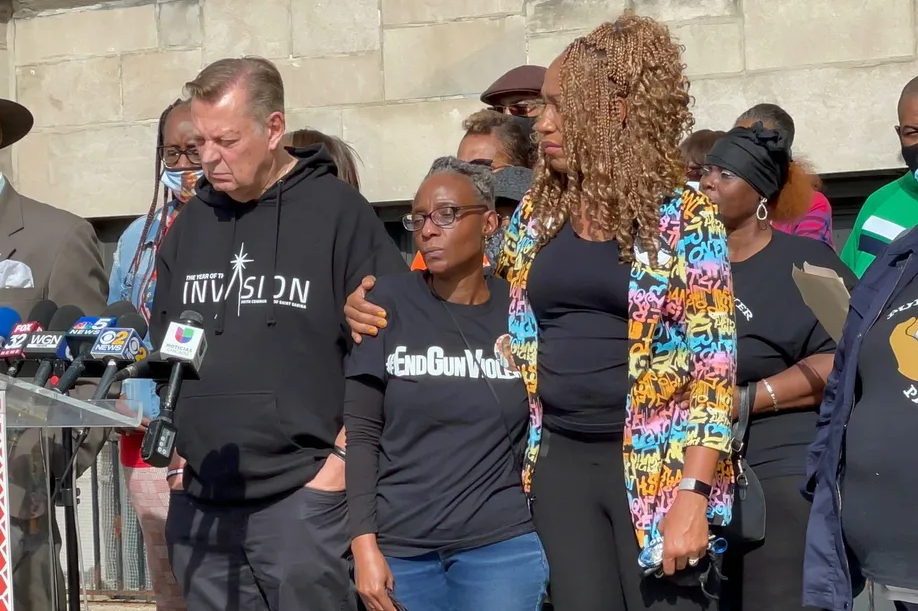 A Chicago teen was shot at school. Her family says officials need a plan to stem gun violence.

Johneece Cobb was at the gravesite of her nephew, shot to death in 2015, when she got a horrifying call: Her 14-year-old granddaughter had just been shot outside Wendell Phillips Career Academy in Bronzeville.

Police said the shooter laid in wait outside the Bronzeville school as classes were letting out, and “immediately starts shooting” when the security guard opened the door for students leaving the building.

Cobb’s granddaughter, a freshman, was shot twice when bullets pieced the door. The 45-year-old security guard was shot multiple times, police said. He was taken to University of Chicago Hospital in fair condition.

Cobb spoke to reporters outside St. Sabina Church Wednesday morning. She said the teen, a “good, fun-loving kid” helping to raise her younger siblings, is in intensive care at Comer Children’s Hospital. The two were able to talk over FaceTime Wednesday morning and the girl is on the mend after having emergency surgery last night.

“Her color is back in her face … she was shot twice,” Cobb said. “That door slowed down those bullets and saved my baby’s life.”

Cobb is a member of Purpose Over Pain, a violence prevention group founded by Chicago parents who have lost children to gun violence. She and other members were in the middle of a memorial for her nephew, Edwin Cook, and said Tuesday could have meant another tragedy for their family, but “God said something different.”

“Her 15th birthday is next Tuesday, and I’m just glad she’ll be able to celebrate it,” Cobb said.

Cobb urged the shooter to turn themselves into police. St. Sabina plans to offer a $5,000 reward to anyone with information leading to an arrest. Cobb told Block Club detectives have been in contact with the family, and she’s optimistic that they will find the person responsible.

Gun violence throughout the city spiked in 2020 and has continued to be stubbornly high this year, young children and teens increasingly among the victims. Last month, two Simeon High School students, both 15, were shot to death on the same day.

Pastor Michael Pfleger, frustrated by the lack of response from City Hall, is calling on Gov. J.B. Pritzker to declare a “state of emergency” as gun violence continues to plague the city. An online petition created by Brave Youth Leaders — the church’s violence prevention program — has been circulating on social media.

Pfleger, Cobb and others are asking local and state officials to create a “strategic plan” to address the violence, which includes funding violence prevention programs throughout communities.

“Our children are becoming an endangered species,” said Pfleger. “We are experiencing a shortage of children in this city … how can you live like this?”

In the meantime, Cobb said she is looking forward to seeing her granddaughter in person this afternoon.

This article was originally posted on A Chicago teen was shot at school. Her family says officials need a plan to stem gun violence.