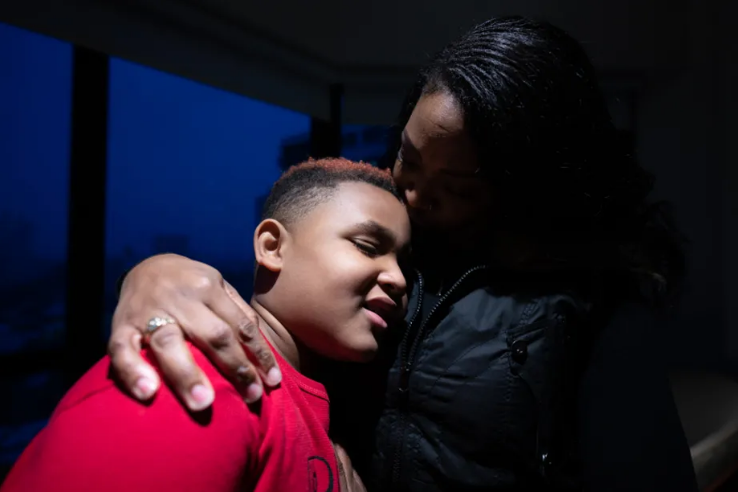 A Chicago Public Schools teacher is pushing back against the district after she says her son’s principal reported her to child protective services for neglect when he was picked up from school seven minutes late.

JaNay Dodson was about to start teaching one of her virtual science classes for Hyde Park Academy on March 2 when she realized she wasn’t going to get to Lakeview in time to pick up her 10-year-old son at Inter-American Magnet School.

Braylin was supposed to have a bus take him to and from Inter-American, 851 W. Waveland Ave. But on the second day of classes for some CPS students, Braylin’s school still hadn’t given him a bus route, Dodson said.

Dodson was unable to leave her class or reach anyone at the school, so she called her brother, who left work and picked up Braylin at 4:37 p.m.

A CPS policy sent to all principals Feb. 5 states whenever a student who cannot travel home independently is stranded after school, staff should call the parent and all emergency contacts. Those people must be told the school will be obligated to call the Police Department and Department of Children and Family Services if the child is not picked up by 4:30 p.m.

Two days later, Braylin was pulled out of class and questioned by a DCFS investigator, Dodson said. Then another person from the agency showed up to inspect her home and collect contact information for people who could vouch for her parenting, she said.

The situation has outraged fellow teachers and parents. Some said they’ve had their own frightening experiences with their children because of this policy, or they have had similar frustrations with district transportation this spring. Others said they’ve also been late picking up their kids many times but never have been reported to police or DCFS.

Inter-American’s principal, Daniela Bylaitis, did not return requests for comment. A spokesperson for DCFS said the agency only confirms investigations in situations where a child has died.

A CPS spokesperson said district officials are looking into what happened to Dodson and Braylin.

“The policies the district has in place are intended to keep students supervised and safe,” the CPS spokesperson said. “That said, we are aware of the circumstances of the incident and we are in the process of reviewing it.”

Dodson said she fears how any record of a DCFS investigation — even if they determine there was no abuse or neglect — will affect her career as a teacher. And after almost a year of remote learning, the incident has made it difficult to persuade Braylin to go to school, Dodson said.

“He was so excited to go back to school because he said he could focus better there, but then he suddenly didn’t want to go to school anymore because he was worried the DCFS lady would come to his classroom again and take him,” Dodson said.

‘It’s Not Just About Me And My Child’

Though the district’s stranded child policy states school staff must try to reach a parent or guardian, Dodson said no one ever contacted her March 2. On the contrary, she said she called the school several times to let them know her brother was on his way to pick up Braylin and he’d arrive a few minutes late. She said she couldn’t reach anyone and received no response to her messages and emails.

Instead, she received an email the following day from Bylaitis, warning Dodson about missing the 4:30 p.m. cutoff for student pickup.

“Yesterday, Braylin was not picked up from school until 4:37 p.m.,” Bylaitis wrote in the email, obtained by Block Club Chicago. “I am empathetic to the challenges of balancing work and family responsibilities, however, all school employees are mandated reporters and are required to follow CPS protocols and guidance. Please be sure that Braylin is picked up on time tomorrow.”

At the time, Dodson didn’t know there was a coming consequence to Braylin being picked up late, she said.

“I thought it was a threat. But I didn’t realize that she had actually called DCFS,” Dodson said.

On March 4, Braylin was pulled out of class and interviewed by a DCFS investigator, Dodson said.

“He didn’t know who she was, but he told me they pulled him out to ask him some questions about home,” Dodson said. “And when it dawned on me that [the school] had actually called DCFS, I did a U-turn and went right back to the school.”

Dodson said she approached Bylaitis and asked who was speaking to her son that day. The principal confirmed it was a DCFS investigator in keeping with CPS protocol, Dodson said.

Dodson waited until she saw another parent pick up their son late, at about 4:47 p.m. She said she approached him and learned this was his third time being late because he was also having bus route issues with the school. But his family was never reported to DCFS, he told her.

“So that’s when I realized she doesn’t apply the so-called protocols to everyone,” Dodson said of the principal. “I realized the only difference between me and everyone else is that I was Black.”

At a chaotic, combative and emotional five-hour meeting of Inter-American’s local school council Tuesday, parents and fellow teachers blasted school leaders for their handling of the situation.

“I am horrified to hear what has happened to Ms. Dodson and her son. We need to repair the harm that has been done to this child,” said another parent, who is also a CPS teacher and whose children are in Dodson’s class. “We all know there are many inhumane policies put forth by CPS that we can choose to ignore in the best interest of humanity.”

Other parents said they’ve also had to grapple with the district’s DCFS reporting policy.

“I have lived all my son’s life with this policy on my back,” said a mother whose son has autism. “He’s 25 now, but when he was 5 years old taking the bus to and from home, I had a 15-minute grace period to pick him up or they’d drop him off at the nearest police station.”

Inter-American’s local school council members clashed over how to respond during the meeting. Carolina Barrera Tobón, a parent representative, urged members to sign a letter to CPS CEO Janice Jackson, calling for the policy to be removed and an investigation to be launched into its use against Dodson.

“We as a community are appalled at both the policy and our principal’s application of this policy,” the letter states. “While we understand that there are limited staff in the building due to the pandemic and the reopening framework, we cannot overstate how problematic this type of punitive policy is and how urgently it needs to be rescinded and replaced with a more empathetic and reasonable policy.”

Dozens of parents and supporters signed onto the letter, but other council members said they did not feel comfortable backing it without having all the facts surrounding Dodson’s case. Ultimately, the group rejected a proposal to send the letter to the district on behalf of the school council.

“It’s difficult for me to put my name on the letter as part of the LSC because this is an ongoing investigation,” chair Lisa Hurtado said. “It’s a private investigation, [and] we shouldn’t be talking about students or students’ names or making accusations when we don’t know the whole story.

“I do believe we could create a resolution to reflect our school community’s beliefs against racism and standing up for Black Lives Matter, but I personally cannot support something where we don’t know all the facts.”

Barrera Tobón said she’s still sending the letter on behalf of a group of parents.

“We think, in short, that the policy is not just problematic, but its implementation was problematic,” Barrera Tobón said.

Dodson said she is grateful for the support she’s received as a teacher and a parent. Ultimately, she wants CPS’ policy changed so other families don’t have to go through the same experience.

“It’s not just about me and my child,” Dodson said. “This practice was bogus, and although I might be OK, there’s no guarantee someone else in my exact same position will be.”