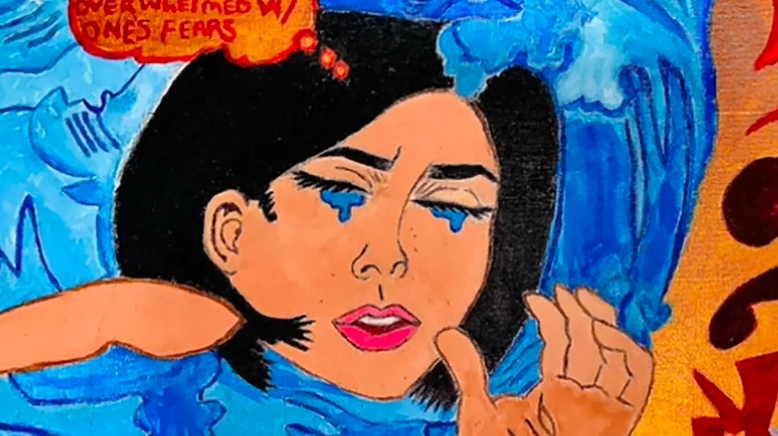 1 in 10 NYC public school students is homeless. I was one of them.

I kept it from my teachers and friends — doing my schoolwork in the library and imagining a brighter future.

In 2016, I felt like my world was collapsing. My two aunts, then my grandmother, died. This made me afraid that I’d lose my mother and twin brother, too, and be put in the foster care system.

In the midst of all that death, my mother, twin brother, and I were forced out of our Brooklyn home, where I had lived all my life. My mom received a foreclosure notice in the mail. She had known it was coming because she hadn’t been able to pay her mortgage.

At the same time, we were living with my violent father. There was constant arguing and fighting and no silence at home. When we finally had to move, I was glad to be free of his toxicity and animosity, but it was still hard to say goodbye to the house where I took my first steps.

The day we moved, we took a cab to Manhattan, where we thought the Department of Housing Services’ Prevention Assistance and Temporary Housing, or PATH, was located. It wasn’t, so my mom had to pay for another cab to the Bronx, where the intake facility for homeless families was situated. We each took only three sets of clothes. My mom put the rest of our things in storage near our old house.

Once we arrived at PATH, we spent hours waiting, moving from floor to floor, and coming across many people of different nationalities and ethnicities. I saw children crying from hunger — rushing to get the paper bags of free food. I wondered about all the horrific circumstances the people around me were facing. I felt anxious. Angry. Confused. Hopeless. Powerless.

I could tell my mother was terrified that we wouldn’t be given a place to live. She kept saying we would be OK, that “God is always with us,” so we shouldn’t worry. Her hands were shaking, though. She said she had a headache. It wasn’t until after midnight that they put us in a car to take us to a shelter in Bushwick.

Our room there was small and dirty, with two bunk beds and a small bathroom with a shower, toilet, and sink. The water in the bathroom was mostly cold. We had no air conditioning or cable. There was a 9 p.m. curfew. There was no elevator, so we had to take the stairs to the third floor, which was a problem for my mother because she has COPD. My brother and I have asthma, so whenever we bought food, we struggled to carry the bags up the stairs.

Three months after we got there, my brother had an asthma attack, and he was admitted to the hospital. My mom spent two days with him while I stayed with an aunt. When we returned to the shelter, the guy at the front desk said, “You no longer live here.”

“What do you mean?” my mother asked. “Where are my belongings?”

Staying out at night was not allowed, and he claimed we did not call to inform them that my brother was in the hospital, although my mother did.

“I called the front desk as soon as he was admitted, and they said it was fine,” my mom told the supervisor. “I have papers proving my son was admitted to the hospital. How could you just throw us out? My son just got out of the hospital.“

But our room had already been assigned to another family, and that was that. We found all of our things in garbage bags in a storage room. They even threw out all of our food, not knowing whether or not my mom could afford to replace it. The truth is, we had no money to waste.

That night, we had to go back to the PATH location in the Bronx. After a couple of hours, we were put in a van and sent to a hotel to spend the night while they prepared a shelter room for us. In the morning, they took us to a different shelter in Brooklyn, about 20 minutes from the first one.

The second shelter, near the Marcy Houses complex, was a nicer two-bedroom apartment with a bath, although the water there was almost always cold. The curfew was 10 p.m., but there were weekend passes so that we could sleep at a family member’s home.

Through it all, I went to school every day with a smile on my face and tried to keep my head held high. I managed to earn high grades. I studied at the library most days after school, using the free Wi-Fi and computers. I prioritized earning good grades to give myself a chance for a bright future. I don’t ever want my future children to experience the financial problems my family endured. The rough times motivated me to keep pushing through the trials and tribulations.

None of my teachers knew I was homeless. I was terrified someone would find out. It was a secret I kept from everyone because I feared getting bullied — or worse, pitied. I didn’t want to be seen as the “poor” or “unfortunate” girl. I didn’t want to be treated differently or become a laughing stock.

Sometimes, my friends wanted to walk me home, and I had to make up an excuse so they wouldn’t. Or, when I was walking back to the shelter, and I saw kids from my school, I would wait till they left to go inside. I didn’t even tell my two best friends that my family was homeless. My mom kept it from other members of our family, too. We suffered in the shadows.

At school, a popular boy I’ll call Jacob showed up in nice sneakers and cologne. He lived in the first shelter where we stayed — two floors down. One day I said hi, and we started talking. He messaged me on social media, and we became friends. It was shocking to me how someone’s life may appear so much better than yours, but you never really know what challenges they may be facing. Befriending Jacob made me feel less alone.

We spent about one year in the shelter system. I don’t know how my mom managed to get our house back, but she did. But so many other children and teens remain in homeless housing. According to the latest figures from the Coalition for the Homeless, there were 11,563 families living in New York City homeless shelters in March, including nearly 17,000 children. The New York State Education Department published data “showing that more than 111,000 New York City students … were identified as homeless during the 2019-20 school year.” That’s about 1 in 10 children enrolled in district or charter schools. Those not in shelters were often doubled up in shared, temporary housing.

I know what it feels like to wake up one day to find all that you have taken from you. I know what it’s like to be thrown into a new environment that you have no control over. The sheer number of homeless students in New York City reflects how many people struggle through the same horrific experiences that my family endured.

When I’m older, I want to help those suffering from homelessness and hunger. I want to be wealthy one day and give back to my Brooklyn community. Until then, I hope this story gets others like me to talk about this issue and not be ashamed and hide it. It is not our fault.

This article was originally posted on 1 in 10 NYC public school students is homeless. I was one of them.