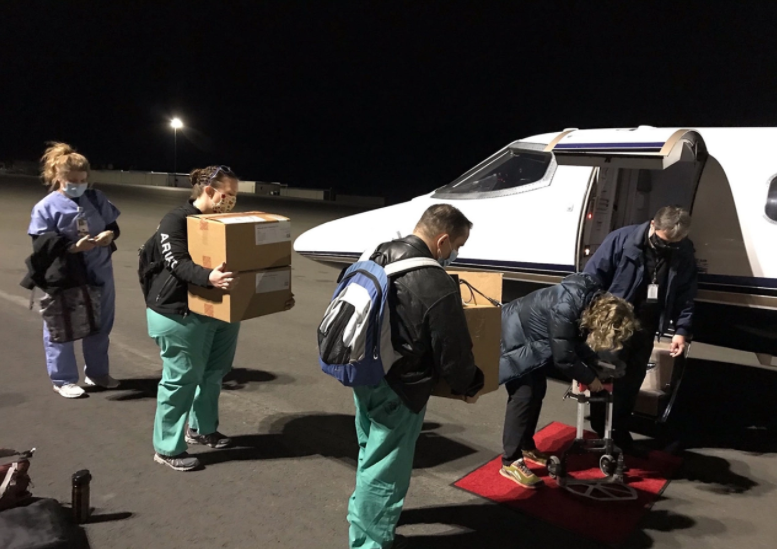 A Learjet 31 took off before daybreak from Helena Regional Airport in Montana, carrying six Veterans Affairs medical providers and 250 doses of historic cargo cradled in a plug-in cooler designed to minimize breakage.

Even in a state where 80-mph speed limits are normal, ground transportation across long distances is risky for the Moderna mRNA-1273 vaccine, which must be used within 12 hours of thawing.

The group’s destination was Havre, Montana, 30 miles from the Canadian border. About 500 military veterans live in and around this small town of roughly 9,800, and millions more reside in similarly rural, hard-to-reach areas across the United States.

About 2.7 million veterans who use the VA health system are classified as “rural” or “highly rural” patients, residing in communities or on land with fewer services and less access to health care than those in densely populated towns and cities. An additional 2 million veterans live in remote areas who do not receive their health care from VA, according to the department. To ensure these rural vets have access to the covid vaccines, the VA is relying on a mix of tools, like charter and commercial aircraft and partnerships with civilian health organizations.

The challenges of vaccinating veterans in rural areas — which the VA considers anything outside an urban population center — and “highly rural” areas — defined as having fewer than 10% of the workforce commuting to an urban hub and with a population no greater than 2,500 — extend beyond geography, as more than 55% of them are 65 or older and at risk for serious cases of covid and just 65% are reachable via the internet.

For the Havre event, VA clinic workers called each patient served by the Merril Lundman VA Outpatient Clinic in a vast region made up of small farming and ranching communities and two Native American reservations. And for those hesitant to get the vaccine, a nurse called them back to answer questions.

“At least 10 additional veterans elected to be vaccinated once we answered their questions,” said Judy Hayman, executive director of the Montana VA Health Care System, serving all 147,000 square miles of the state.

The Havre mission was a test flight for similar efforts in other rural locations. Thirteen days later, another aircraft took off for Kalispell, Montana, carrying vaccines for 400 veterans.

In Alaska, another rural state, Anchorage Veterans Affairs Medical Center administrators finalized plans for providers to hop a commercial Alaska Airlines flight on Thursday to Kodiak Island. There, VA workers expected to administer 100 to 150 doses at a vaccine clinic conducted in partnership with the Kodiak Area Native Association.

“Our goal is to vaccinate all veterans who have not been vaccinated in and around the Kodiak community,” said Tom Steinbrunner, acting director of the Alaska VA Healthcare System.

VA began its outreach to rural veterans for the vaccine program late last year, as the Food and Drug Administration approached the dates for issuing emergency use authorizations for the Pfizer-BioNTech and Moderna vaccines, according to Dr. Richard Stone, the Veterans Health Administration’s acting undersecretary. It made sense to look to aircraft to deliver vaccines. “It just seemed logical that we would reach into rural areas that, [like] up in Montana, we had a contract with, a company that had small propeller-driven aircraft and short runway capability,” said Stone, a retired Army Reserve major general.

Veterans have responded, Stone added, with more than 50% of veterans in rural areas making appointments.

As of Wednesday, the VA had tallied 220,992 confirmed cases of covid among veterans and VA employees and 10,065 known deaths, including 128 employees. VA had administered 1,344,210 doses of either the Pfizer or Moderna vaccine, including 329,685 second vaccines, to veterans as of Wednesday. According to the VA, roughly 25% of those veterans live in rural areas, 2.81% live in highly rural areas and 1.13% live on remote islands.

For rural areas, the VA has primarily relied on the Moderna vaccine, which requires cold storage between minus 25 degrees Centigrade (minus 13 degrees Fahrenheit) and minus 15 degrees C (5 degrees F) but not the deep freeze needed to store the Pfizer vaccine (minus 70 degrees C, or minus 94 degrees F). That, according to the VA, makes it more “transportable to rural locations.”

The VA anticipates that the one-dose Johnson & Johnson vaccine, if it receives an emergency use authorization from the FDA, will make it even easier to reach remote veterans. The vaccines from Moderna and Pfizer-BioNTech both require two shots, spaced a few weeks apart. “One dose will make it easier for veterans in rural locations, who often have to travel long distances, to get their full vaccination coverage,” said VA spokesperson Gina Jackson. The FDA’s vaccine advisory committee is set to meet on Feb. 26 to review J&J’s application for authorization.

Meanwhile, in places like Alaska, where hundreds of veterans live off the grid, VA officials have had to be creative. Flying out to serve individual veterans would be too costly, so the Anchorage VA Medical Center has partnered with tribal health care organizations to ensure veterans have access to a vaccine. Under these agreements, all veterans, including non-Native veterans, can be seen at tribal facilities.

In some rural areas, however, the process has proved frustrating. Army veteran John Hoefen, 73, served in Vietnam and has a 100% disability rating from the VA for Parkinson’s disease related to Agent Orange exposure. He gets his medical care from a VA location in Canandaigua, New York, 20 miles from his home, but the facility hasn’t made clear what phase of the vaccine rollout it’s in, Hoefen said.

The hospital’s website simply says a staff member will contact veterans when they become eligible — a “don’t call us, we’ll call you,” situation, he said. “I know a lot of veterans like me, 100% disabled and no word,” Hoefen said. “I went there for audiology a few weeks ago and my tech hadn’t even gotten her vaccine yet.”

VA Canandaigua referred questions about the facility’s current phase back to its website: “If you’re eligible to get a vaccine, your VA health care team will contact you by phone, text message or Secure Message (through MyHealtheVet) to schedule an appointment,” it states. A call to the special covid-19 phone number established for the Canandaigua VA, which falls under the department’s Finger Lakes Healthcare System, puts the caller into the main menu for hospital services, with no information specifically on vaccine distribution.

For the most part, the VA is using Centers for Disease Control and Prevention guidelines to determine priority groups for vaccines. Having vaccinated the bulk of its health care workers and first responders, as well as residents of VA nursing homes, it has been vaccinating those 75 and older, as well as those with chronic conditions that place them at risk for severe cases of covid. In some locations, like Anchorage and across Montana, clinics are vaccinating those 65 and older and walk-ins when extra doses are available.

According to Lori FitzGerald, chief of pharmacy at the VA hospital in Fort Harrison, Montana, providers have ended up with extra doses that went to hospitalized patients or veterans being seen at the facility. Only one dose has gone to waste in Montana, she said.

To determine eligibility for the vaccine, facilities are using the Veterans Health Administration Support Service Center databases and algorithms to help with the decision-making process. Facilities then notify veterans by mail, email or phone or through VA portals of their eligibility and when they can expect to get a shot, according to the department.

Air Force veteran Theresa Petersen, 83, was thrilled that she and her husband, an 89-year-old U.S. Navy veteran, were able to get vaccinated at the Kalispell event. She said they were notified by their primary care provider of the opportunity and jumped at the chance.

“I would do anything to give as many kudos as I can to the Veterans Affairs medical system,” Petersen said. “I’m so enamored with the concept that ‘Yes, there are people who live in rural America and they have health issues too.’”

The VA is allowed to provide vaccines only to veterans currently enrolled in VA health care. About 9 million U.S. veterans are not enrolled at the VA, including 2 million rural veterans.

After veterans were turned away from a VA clinic in West Palm Beach, Florida, in January, Rep. Debbie Wasserman Schultz (D-Fla.) wrote to Acting VA Secretary Dat Tran, urging him to include these veterans in their covid vaccination program.

Stone said the agency does not have the authorization to provide services to these veterans. “We have been talking to Capitol Hill about how to reconcile that,” he said. “Some of these are very elderly veterans and we don’t want to turn anybody away.”

This article was originally posted on To Vaccinate Veterans, Health Care Workers Must Cross Mountains, Plains and Tundra