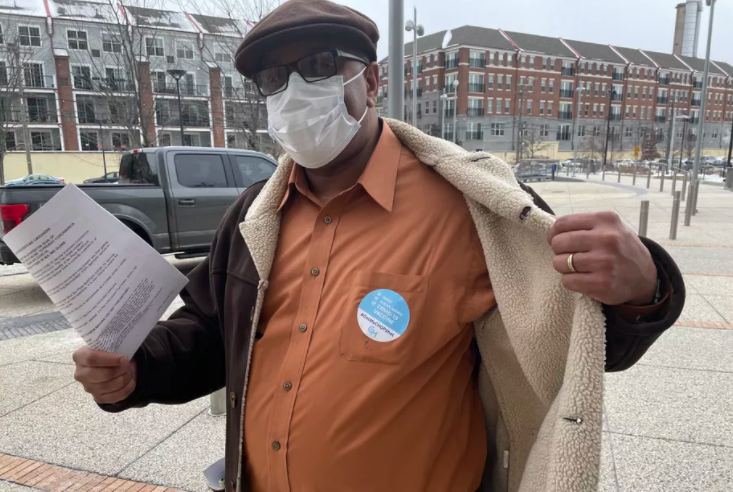 Philadelphia teachers begin to get vaccinations. Will it help efforts to reopen March 1?

With one week to go before the district’s early-grade teachers are scheduled to return to schools, the first Philadelphia education workers began receiving COVID-19 vaccinations Monday.

Teachers and staff from district, charter, and private schools trickled into the Roberts Center at the Children’s Hospital of Philadelphia, or CHOP, to get their scheduled shot. CHOP was tapped last week to coordinate the vaccination distribution for thousands of city education workers, initially at the Roberts Center, and then in six other school locations around the city.

Keith Arrington, principal at John F. Hartranft Elementary School in North Philadelphia, told Chalkbeat the process of getting the shot was relatively smooth.

“They escort you upstairs to the second floor and they have a check in station and then you go to another waiting area until you are brought to the table to get your vaccine shot,” Arrington said.

The availability of vaccines for teachers and others who staff school buildings has emerged as an issue in the school district’s efforts to reopen for some in-person learning. The city’s health department had not put teachers among the highest priority groups for vaccines, saying that national data has shown schools are not major sources of transmission. But, after teachers refused to return to school buildings and held protests outside, Mayor Jim Kenney announced a plan to vaccinate teachers.

It’s unclear if Monday’s vaccination kick-off will smooth the path for reopening.

Valerie Haley and Alyxe Fields, kindergarten teachers at William Rowan Elementary School in West Oak Lane, said they are ready to get vaccinated and have appointments for March 5 — after they are supposed to report to schools.

“I’m comfortable getting the vaccine but not comfortable going back into the buildings,” Haley said. “Are things set up as far as the plexiglass? I’d feel more comfortable if students or families were vaccinated as well.”

Fields said she feels pressured. “I’m young and 35. I’m being forced to take a vaccine that someone older could have used so I can go back into the classroom.”

District leaders have had to delay reopening plans for a third time, with a new target date of March 1, for prekindergarten through second grade. About 10,000 educators already are teaching in person or expected back under the district’s plans. It’s unclear if that date will stand. The district and the teachers union still are waiting to hear the results of a third-party mediator over the union’s concerns about ventilation issues in school buildings.

The health department estimated that about 20,000 education workers in the city, including those in private and charter schools and registered child care providers, are eligible for vaccinations through CHOP.

About 25 school district workers, mostly from charter schools, were at the center when it opened Monday. CHOP officials declined comment and the school district was unavailable to provide a statement.

About 100 private schools have been open for almost seven months of in-person instruction, with a small number of outbreaks reported, according to the city’s health department.

Ryan Stroud, a teacher at Deep Roots Charter School, said initially some teachers were confused about how  to sign up for the vaccination. “But once my office found out about the process it was really fast and efficient,” Stroud said.

Arrington said he’s been back in his school’s building since October — when the district was scheduled to go back for hybrid learning. He and his team rotated to give the building full coverage.

The district principal said he understands some teachers’ apprehension about returning to schools and pointed out that the principals stand in support of the teachers, who have protested their return to school.

“I’m glad for something like this because you are saying that it’s a priority for kids to be back in school and that we are essential and we are a priority,” Arrington said. “Well then make us a priority by saying we have the ability to come and get this vaccine. So they finally got there with that.”

Earlier this month, Philadelphia Federation of Teachers President Jerry Jordan invoked terms in a memorandum of agreement the district signed last fall that dictated the safety conditions in schools before in-person learning could resume. The agreement called for hiring an independent mediator to determine whether the safety requirements were met, if the two sides were at odds. That mediator, Dr. Peter Orris of Chicago, has yet to make his decision.

“I definitely understand the teachers and the fact teachers are in the room with the students,” Arrington said. “I’m in the building but I’m not in the room so I can’t put myself in their position to say they have the same concerns as I would.”

This article was originally posted on Philadelphia teachers begin to get vaccinations. Will it help efforts to reopen March 1?