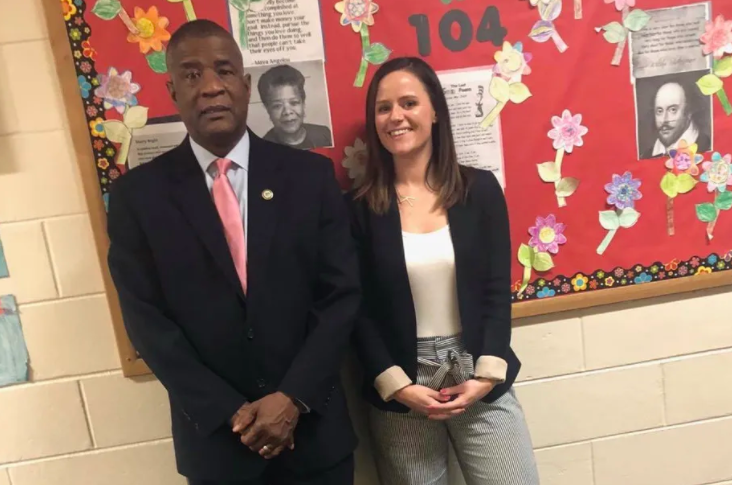 Members of the Board of Education voted not to renew two Black-led charter schools despite public outcry from parents, ending a long conflicting relationship with the district.

The majority of the board voted to follow the recommendation of a hearing officer to not renew Universal Bluford and Universal Daroff schools. Board members Lisa Salley and Cecelia Thompson voted against the non-renewals.

Attorney Rudy Garcia, whom the school board hired to review the two schools, made a damaging case Thursday for the district to cut its ties.

“I concluded that there were ample grounds for non-renewal for both schools,” Garcia said during his presentation to the board Thursday. He cited low proficiency rates in math, English language arts, and science, among many other concerns about the schools’ financial viability.

“Both had negative margins and low ratios, meaning they had insufficient funds to cover liabilities,” Garcia said. “Both had negative non-restricted fund balances, or rainy day funds that would cover unexpected emergencies.”

Garcia said both schools failed to comply with other applicable laws such as maintaining Pennsylvania child abuse clearances, and state and federal criminal backgrounds, Garcia said. “There were many instances where that information was not in the files. And that has an effect on student safety,” he said.

Garcia noted there were many files missing on student health, dental and immunization safety at the two schools, including meeting violations of the Sunshine Act.

Parents of students who attend Bluford and Daroff testified at Thursday’s board meeting on behalf of the two schools.

Milon Attaway, a parent of a second grader at Bluford said, “We are begging that you vote against the non-renewal recommendation and let Bluford keep progressing. I’ve personally witnessed the intellectual advancement of Bluford scholars. I spend nights texting my teachers and no matter what time they always respond. My son’s scores are significantly higher and he’s on the honor roll. He wants me to let you know to keep his school the same.”

Francisco Echevarria is the father of a second and fifth grader at the school. He said it’s the culture that has kept his children enrolled at Daroff since kindergarten.

“Universal Daroff is a true staple in the West Philadelphia community and it provides my sons with regular and special education services,” Echevarria said.

Lashana Woodson, a graduate of Daroff, has a daughter who has attended the school since kindergarten and is graduating from the eighth grade with straight As.

“What has saddened me throughout this process is the overwhelming discrimination against Bluford, Daroff and Universal Company as well as the large Black and Latino charter schools of Philadelphia,” Woodson said. “This is something the officer failed to detail in his report.”

James Ruffin, Daroff’s principal, acknowledged the school faces some behavioral problems. ”But if you look at Daroff students, they are hungry for knowledge and they want what every student wants,” Ruffin said. “I also want to dispel the myth that our parents don’t care about their kids. They want the best for their kids.”

In a statement late Thursday, Penny Nixon, superintendent and CEO of schools at Universal, said the company questions the accuracy and objectivity of the data utilized as the basis for Garcia’s recommendation for non-renewal.

“An expert testified and demonstrated that both Universal Bluford’s and Universal Daroff’s academic performance exceeded the School District of Philadelphia in their properly identified peer group,” the statement said. “The vote is a continued assault on Black-led and founded charter schools.”

Universal had joined a coalition of Black-run charters in Philadelphia claiming systemic bias has led the school district to recommend closure or non-renewal at disproportionately high rates. According to the coalition, Black and Latino charter leaders operate 19% of the charter schools in the city, yet account for 87% of those recommended for closure or non-renewal in recent years.

The African American Charter Schools Coalition held a press conference in November to highlight disparate outcomes in charter regulation. The group includes 21 of the 22 Black-run charters in Philadelphia, which enroll students from 13,000 families.

A press conference scheduled for Tuesday was canceled. Leaders were scheduled to call for a moratorium on closing Black-founded and Black-led schools “until an investigation into the systemic racism in the district is completed,” according to the media notice.

Philadelphia has more than 80 charter schools, with a total enrollment of more than 75,000 students, or about a third of those enrolled in city publicly-funded schools. The school district, through its office on charter schools, is the sole authorizer.

Daroff and Bluford together serve 1,250 students. The schools are among the city’s Renaissance charters, which can only enroll students from their neighborhoods.

According to the Pennsylvania Department of Education, if a charter agreement should be revoked, the charter is dissolved. Students attending a dissolved charter school are able to apply to another school in the student’s district of residence and normal application deadlines will be disregarded under these circumstances, the department’s website states.

A representative told Chalkbeat that the attorneys for the schools are filing to the Charter Appeals Board Friday. The schools have asked parents, teachers and staff to stay the course as Universal works with the attorneys via the state’s appeal process.

“Universal will address and defend our academic growth and improvement, organizational compliance, viability, and finances as an Education Management Organization against the Board’s vote of non-renewal for Universal Bluford and Universal Daroff,” the statement said.

Nixon has argued that both Bluford and Daroff outperform schools serving a similar demographic.

“Our schools are not perfect, and there are minor operational issues that we have addressed,” she said. “However, there is nothing that substantiates a non-renewal recommendation given the great work that we have done turning around both schools that were failures under the school district.”

But Garcia argued the district looks at comparison groups to determine if these schools were performing better, same as, or worse as the students in the same grades of students in the school district, or students in the charter sector, or similar charter schools that serve similar student bodies.

“This was a way of determining how they were doing compared to other schools,” Garcia said.