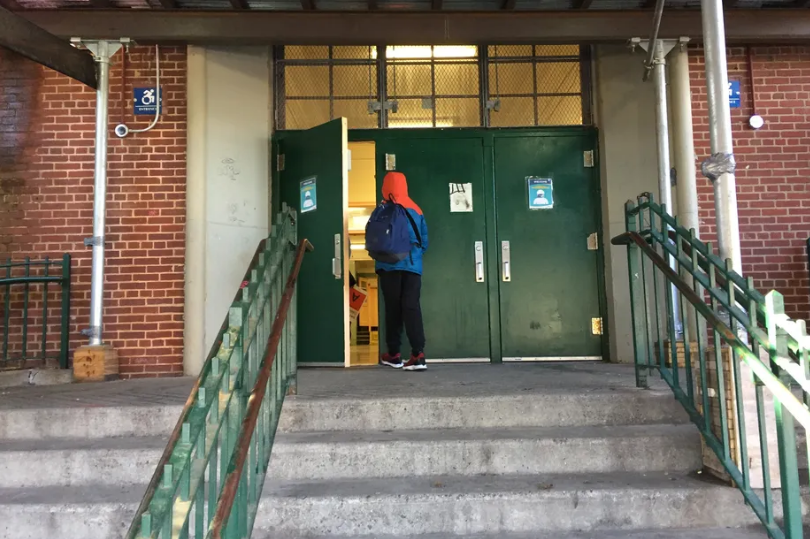 The city will survey remote middle and high school students but won’t yet give them a chance to return.

New York City’s pre-K and elementary school students who are learning at home full-time will get another chance this school year to sign up for in-person instruction, Mayor Bill de Blasio announced Friday.

The window for opting into school buildings will open next week and applies to children in pre-K through grade five. Students will be allowed to return over the course of April, de Blasio and schools Chancellor Meisha Porter told reporters.

While the city has “more questions” to resolve before inviting back middle and high school, de Blasio is asking those students during next week’s opt-in window to indicate their interest in returning to buildings to help schools understand how many children are clamoring to be in-person.

Additional details about the opt-in window will be shared Monday, de Blasio said, adding the city needs more time “to determine the best way to implement all of this.”

“The hope this is going to bring to families, the chance to really benefit from being in school, with teachers, with adults, who are really looking out for them, helping them, with their friends again — it’s amazing,” de Blasio told reporters. “This is really crucial to how we recover for everyone because step-by-step we are bringing back the life of this city.”

The announcement came hours after the U.S. Centers for Disease Control and Prevention eased guidelines, from 6 feet to 3 feet, for what’s considered safe for physical distancing in schools. The agency recommended that distancing can be reduced in elementary schools regardless of the level of coronavirus transmission in the surrounding community. For middle and high schools, community transmission must be low to substantial, but not high, to relax social distancing rules. New York City has seen 6.6% positivity rate, with 40 new cases per 100,000 people over the past week, according to a New York Times coronavirus tracker. That puts the city at a moderate transmission level, according to CDC guidelines.

With just three months left in the school year, it’s unclear how significant the demand for in-person learning will be among the 70% of families who chose full-time remote school. There’s also a question of trust, and whether fully remote families feel any more confident in school now, especially as community coronavirus rates have plateaued over the past several weeks, despite vaccination efforts, unlike elsewhere in the country where rates have fallen.

Porter and de Blasio emphasized that buildings are safe to return to, pointing to measures like masking and social distancing, and a recent study that found virus positivity within New York City schools from October through December was lower than in the surrounding community.

This opt-in period will also provide some clues for the fall in gauging how many families are interested in returning to buildings, Porter said. She believes it will “raise the confidence level” of families across the city as the de Blasio administration prepares for fall.

Scheduling new students into the building could present big logistical challenges for principals, who have already reprogrammed their schools several times this school year — most recently to meet de Blasio’s mandate to provide instruction five days a week to as many of their in-person students as possible. A new opt-in period could mean complicated changes in schedules at schools, depending on how many of their families want to return and how much space they have, even with the relaxed distancing.

De Blasio and Porter said they do not want this opt-in period to result in schedule changes for students who are currently in person. They don’t believe that principals will need to turn families away to preserve existing in-person schedules because schools will have more space, and many families will still choose to stay remote, they said.

“We want to start from the vantage point of, how do we get more students in, how do we honor those current schedules,” Porter said. “We are absolutely going to work with principals, work with schools because we know that every school has a different case and is in a different situation.”

But the union representing principals was miffed that school leaders hadn’t been briefed on the changes.

“Once again, detailed plans should have been shared with principals prior to any citywide announcement, and it is essential that the DOE immediately issues further guidance as principals will now be responsible for answering their community’s pressing questions,” wrote Mark Cannizzaro, the union’s president, in a statement. “Our school leaders are up for the many challenges ahead, so long as the city communicates clearly and empowers them to do what they know is best for their schools.”

The city teachers union does not want to accept the new guidelines until consulting with their “trusted independent medical experts” to evaluate them, Michael Mulgrew, the union’s president, wrote in a letter to its members. The union also said that such a change must be approved by state health officials.

“Schools must continue to follow the existing guidance from the New York State Department of Health,” said Jill Montag, spokesperson for the state health department, in an email after this story published. “The CDC’s newest social distancing recommendations are currently under review.”

Earlier this month, an Onondaga County official told CNY Central that the state had permitted them to reduce school distancing, noting that such a decision is up to localities.

De Blasio did not reveal additional details about City Hall’s conversations with the union, but said his team had several discussions Friday with union leaders to “begin the process of determining how to make this work together.”

This article was originally posted on NYC’s fully remote elementary students can opt back into school buildings, de Blasio says