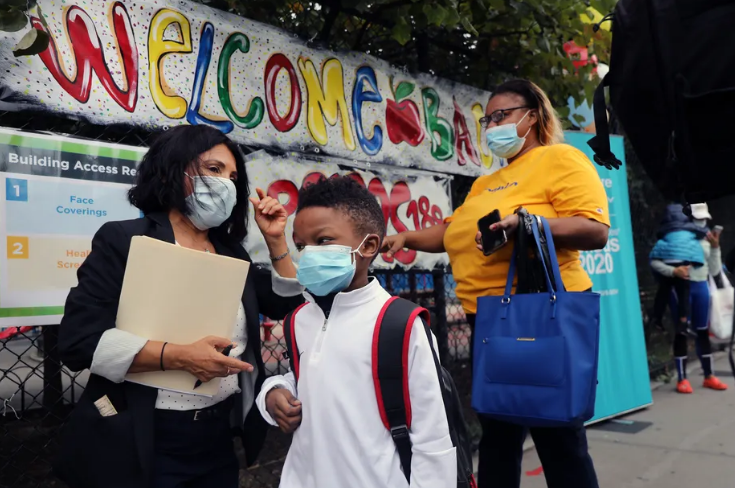 NYC’s first day of school this fall is Monday, Sept. 13

New York City schools won’t start until mid-September for the 2021-2022 school  year, according to the calendar the education department released Tuesday.

Traditionally, the first day of school is scheduled after Labor Day, based on the contract with the city’s teachers union. This year, the start is even later because schools are closed for Rosh Hashanah, the Jewish New Year, which falls on the Tuesday and Wednesday after Labor Day. Teachers will then have two days of planning before opening to students on Monday, Sept. 13.

Historically, the school calendar is finalized well before this time of year. For the 2018 and 2019 school years, the calendar was posted in April. Prior to that, the calendar had been out in March. Last year was an outlier — with Mayor Bill de Blasio promising that schools would open the Thursday after Labor Day, only to delay the start twice, amid labor disputes and concerns about ventilation.

The education department released the calendar on Tuesday, a day after Chalkbeat inquired about the first day of school.

Once again, snow days will be remote instruction for students. Election Day will continue to be used for professional development for school staff, but students will be expected to do pre-taped lessons from home.

With more than 60% of students learning exclusively from home this year, many families are eager for a fresh start and are waiting to know more about the city’s plans to reintegrate some students who haven’t been in a classroom for more than a year.

The city has been focusing much of its attention on summer school, which this year is a meld of academics and camp-like activities open to all students. The program, which starts the first week of July, ends by Aug. 13 for middle and high school students. Aug. 20 is the last day for elementary school children. The de Blasio administration earmarked $200 million for the program, called Summer Rising, and anticipates 190,000 students will participate, according to budget documents released last week.

But some critics say the city should also be paying more attention to next school year.

“The DOE needs to concentrate on both, and that while summer programming might need rethinking with the infusion of new funds, these are decisions that should have been well underway since the winter,” said David Bloomfield, a professor of education leadership, law and policy at Brooklyn College and the CUNY Graduate Center. “Now is the time to be deciding on fall, especially the key questions surrounding continuation of remote learning.”

De Blasio has promised that city schools next year will offer five days a week of in-person instruction along with a fully remote option, but has so far offered few other details.

This article was originally posted on NYC’s first day of school this fall is Monday, Sept. 13