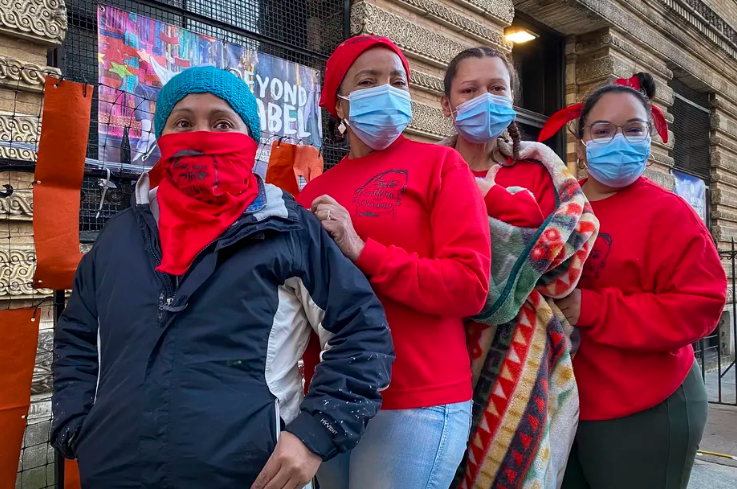 Before the COVID-19 pandemic took hold last spring, Verónica Leal was used to working up to six days a week cleaning homes for “professionals, lawyers, educators — people like that.”

But as coronavirus cases mounted last March, the 35-year old Washington Heights resident began getting text messages from clients telling her that they no longer needed her services.

“It was like a domino effect. It started one by one and before I knew it all the work was gone and I started to think, alright, OK, but what about me?” Leal told THE CITY in Spanish.

“One of my clients told me that he was going to work via Zoom indefinitely. And I even joked, ‘Well, you can put me on Zoom too and I’ll show you how to clean the house,’” Leal said.

Unlike many other New Yorkers who lost their jobs and received unemployment benefits and federal assistance through stimulus checks, Leal is excluded from both of those because of her immigration status.

She is among dozens of people who have been participating in a hunger strike near Washington Square Park, demanding that the upcoming state budget include a $3.5 billion fund for workers ineligible for government financial assistance because of their immigration status.

The Democratic majorities of both houses of the state Legislature have declared their commitment to a relief fund for excluded workers. Yet whether aid will ultimately be part of the state budget due this week is up in the air, as Gov. Andrew Cuomo, Senate Majority Leader Andrea Stewart Cousins and Assembly Speaker Carl Heastie reckon with how applicants will prove eligibility.

“We’ve lived through so much this year, we’ve experienced so much need,” Leal recalled telling her teenage daughter when she explained why she wanted to participate in the hunger strike. “And if this group that is coming together to go on strike gets to win on their demands, that means they’d have made a difference, not just for themselves but for thousands if not millions of people — and I want to be a part of that.”

Cuomo did not include any funding in his budgetary proposal in January for workers shut out of financial assistance.

The Senate and Assembly, meanwhile, created a $2.1 billion pool for excluded workers in their one-house budget resolutions passed earlier this month — largely symbolic statements of priorities that traditionally kick off budget negotiations with the governor’s office.

Albany sources said that while the size of the fund appears to have been agreed upon, Cuomo and the legislative leaders have differed on exactly how undocumented people will prove they qualify for relief.

Both chambers’ plans allow for individuals to self-attest that they are eligible for financial assistance if they don’t have access to documents showing their pre-pandemic income and loss of earnings.

The governor’s office is pushing for more stringent verification requirements to prove loss of income caused by the pandemic. Among the proposed requirements: making applicants obtain an Individual Taxpayer Identification Number (ITIN), which allows individuals without a Social Security Number to pay taxes, according to legislative sources familiar with the budget negotiations.

The governor’s office did not respond to requests for comment.

Lawmakers and advocates argue that adding stricter documentation requirements will exclude large swaths of undocumented workers, for whom traditional records — such as bank statements, pay stubs and tax returns — are out of reach.

Cuomo’s office “really seems to be trying to narrow access and eligibility for this program — just like we’ve seen them water down other very needed programs like the rent relief program — and so we’re pushing to expand those parameters to truly include those who have been hardest hit,” said State Sen. Jessica Ramos (D-Queens), a sponsor of a leading bill to create an excluded workers fund.

Getting the documentation together to apply for an ITIN can take months, and getting approved by the Internal Revenue Service for a number can add to the wait. The pandemic caused a months-long backlog at the IRS, which is currently processing requests made in December.

“This is a matter of urgency,” said Ramos. “There’s no time to get their documentation together. We have to be able to meet people where they are.”

Some immigrants also shied away from applying for an ITIN, said Deborah Axt, the soon-to-depart co-executive director of Make the Road New York, an immigration advocacy group. “Especially in the Trump era, nobody was willing to get them,” she said.

A Boost by Soros

While California created a $125 million coronavirus disaster relief fund last spring for undocumented individuals who were ineligible for other forms of aid, New York has no similar fund.

Instead, undocumented New Yorkers who live in the five boroughs had to rely on a $20 million one-time emergency relief fund funded by philanthropist George Soros, which provided $400 to an individual and up to $1,000 for a family.

Building a paper trail of income is challenging for many undocumented workers who are ineligible for a Social Security number because of their immigration status, making opening up a bank account difficult and getting a job on-the-books nearly impossible. Instead, they largely operate in cash transactions or rely on check-cashing facilities.

That includes workers like Maria Isabel Sierra from The Bronx, who saw income from the Elder Avenue food cart that she operates evaporate once New Yorkers locked down at home last spring. That has left her unable to pay rent for the apartment she shares with her adult son, who has special needs.

Sierra, 54, does all of her transactions in cash and would be left out of aid if the documentation requirements under discussion in Albany go through.

“Like all excluded workers, I am demanding the $3.5 billion in aid that we deserve,” Sierra said in Spanish. “We want justice, and need the governor to listen to us.”

While a majority of the workers participating in the hunger strike do not have American citizenship, some, like Santa Arias, do.

Arias, an, 56-year-old domestic cleaner from the Dominican Republic, joined the hunger strike 11 days ago in solidarity with those without access to aid because of their immigration status.

“I have my papers, and even then I don’t get all the help that I need either,” she said in Spanish. “I have my food stamps, but I’m behind on rent for the first time in my life. So we have to stand united as immigrants and tell Cuomo, Heastie and Andrea Stewart-Cousins and make our voices heard: Our lives matter and we deserve help just like everyone else.”

This article was originally posted on Hunger Strikers Demand $3.5B Relief Fund for Undocumented New Yorkers in State Budget. Will Cuomo Come Through?