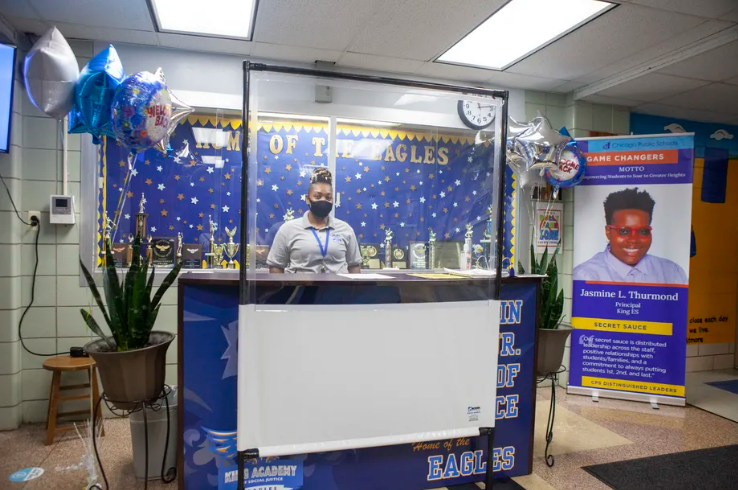 Chicago set a reopening target for high schools. Can it deliver?

While publicly aiming to reopen high school campuses next month, Chicago Public Schools faces several challenges — and overcoming any of them is far from certain.

First the district must secure an agreement with its teachers union, which it angered this week by announcing the final stage of reopening before nailing down complete union consent. The district also must also figure out how to safely schedule students in multiple classes, convince enough parents and students to actually return to campus, and get vaccines to all the staff who want them.

That sounds daunting, but the city has made progress on several fronts: the 7-day COVID test positivity rate has fallen to 2.9%, an initial survey shows 30% of district staff is vaccinated, and younger-grade students can return to classrooms.

The city’s 2.9% test positivity rate represents a fraction of its double-digit rates in January, when the district first opened schools to prekindergarten and some special education students.

Chicago also has continued to vaccinate more staff and launched a promotional campaign Wednesday to encourage more employees to visit district vaccine sites. According to a district survey that had limited responses, at least 30% of Chicago Public Schools employees had received at least one vaccine shot as of March 15.

On Wednesday, schools chief Janice Jackson said she expects teachers who had received permission to work from home because of lack of access to the vaccine to now return to school buildings once they receive their first shot.

“In order to continue to execute our [reopening] plan, we obviously need all of our staff in schools to the maximum extent possible within our schools,” Jackson said, speaking Wednesday at a vaccination center at Roosevelt High School in Albany Park.

Still, the district must solve a number of challenges before reopening high schools, including cementing an agreement with its restive teachers union.

The union continues to signal its discontent. This week in an email, union officials cautioned members about answering the district’s vaccine survey until the union had secured an agreement on whether, and how, union members should disclose their vaccination status. The union also noted that it lacked data on teacher vaccinations and said even if all teachers were vaccinated, students could still risk catching COVID-19 in school buildings.

In a show of urgency, the Chicago Teachers Union and the school district have been negotiating multiple times a week with the support of a mediator. The earlier agreement on elementary schools offers a framework for talks.

Union officials said they expect much of the existing agreement could apply to high schools. Still, they stressed a need for stricter safety protocols.

The union insisted it had not agreed on a timeline for reopening high schools.

“Obviously, the virus ultimately drives the timeline,” Goodchild said. “It’s critical to get logistical and safety standards in place such that reopening can be done safely and equitably.”

In a statement on Tuesday, district leaders described talks with the union as “productive” and called April 19 a “target” for reopening.

Chicago’s reopening negotiations have been among the most contentious in the country, negotiations expert Brad Marianno said. COVID-19 has placed additional pressure on an already difficult relationship.

Marianno, a professor of education policy and leadership at the University of Las Vegas, who with a team of researchers has been tracking district reopening agreements since spring, said it’s not uncommon for districts to negotiate elementary, middle, and high school agreements separately.

“How you manage high school students is obviously different to how you would manage elementary students,” he said.

The district must also convince enough parents and students to return to make their efforts worth it. In the past two weeks, Chicago has hosted two town halls for high school families, where officials have touted their safety plans and some high school principals have said how excited they are to have students return.

Dovontae Richardson, an 11th grade student at Dunbar Vocational Career Academy in Bronzeville, says he is on the fence about whether he will return to the classroom this school year. But he’s glad to have the option.

“For me to focus, I need to be in school,” said Richardson, who has been playing on his school’s basketball team this month. As he’s managed to keep his grades at As and Bs, he may defer to his safety concerns when making a decision about attending classes on campus. “Some kids don’t care about safety,” he said.

As Chicago has reopened elementary and middle school classrooms, about 1 in 3 eligible students has said they expect to return. But the district hasn’t released actual attendance numbers, and campus-level reports suggest that not all students who planned to report to school buildings did.

One of the big complications has been staffing, and how many educators have work-from-home accommodations. In some cases, students may be in a classroom while their teacher teaches from home. The most recent data comes from a survey taken by the Chicago’s principals group, which found students in as many as one-third of reopened classrooms may have an educator teaching virtually — and this scenario is much more common in schools that serve primarily Black and Latino students.

If high school students do return April 19, they would follow a hybrid learning model similar to that of elementary and middle schools. In-person students would be divided into pods and learn on campus part of the week and remote the rest, according to information provided during a district meeting for families last week.

High school families have until Friday to tell the district if they want to return to in-person learning.

Cassius Palacio, a senior at Brooks College Prep on Chicago’s Far South Side, worries about his eyesight declining after spending hours on the computer each day. Still, he’s likely not going to return to campus  because he lives with his grandmother, who has not yet been vaccinated.

“I would like to go back but I will probably not risk the health of my family,” Palacio said.

Palacio, a member of a student-led advisory team to the district, said he wants the district to reduce the number of hours it expects students to be at their computer each day, and to provide students access to a mental health counselor.

His high school of nearly 1,000 students has only four counselors to cover both mental health and career counseling, he says.

Still, Palacio feels hopeful. A few weeks ago, his school held a socially distanced picture day. “It was great and refreshing to see everyone,” he said. “There were no squabbles, nothing negative. There were a lot of elbow bumps.”

This article was originally posted on Chicago set a reopening target for high schools. Can it deliver?