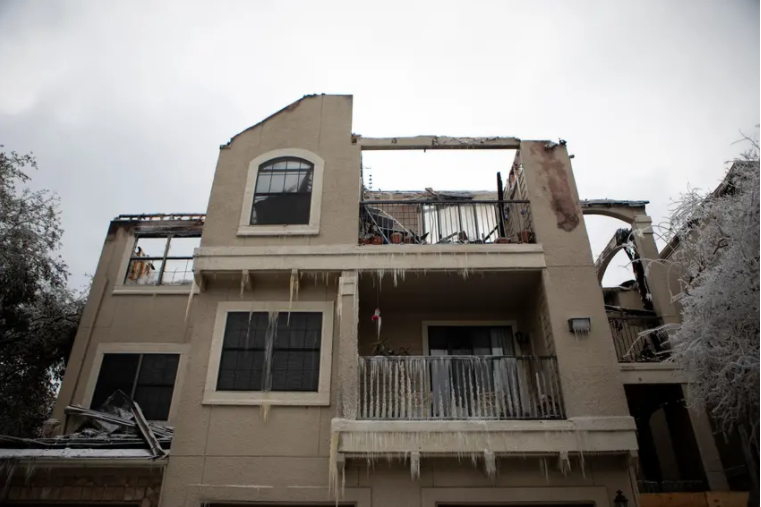 Over the weekend, state Rep. Shawn Thierry drove her elderly mother and daughter to a hotel to wait out the frigid storm that zapped power and heat for millions of Texans.

She left the faucets dripping in her Houston home and wrapped the pipes to help prevent them from bursting.

On Wednesday, she returned to a “nightmare.” It was raining inside. The ceiling had holes. Insulation was everywhere. Precious family photos were ruined, as were financial documents like her tax returns.

Her daughter’s room was flooded, and her kitchen and home office drenched. The crown molding was cracking. Sheetrock was splitting.

“I know that I cannot come back to this house for … probably at least two months,” said Thierry, who may move back to her childhood home — the room she used as a teenager — with her daughter while she gets back on her feet.

Her daughter asked: “Mommy, are we homeless?”

The freezing temperatures and icy snow that this week knocked out power for millions of Texans has spawned a new set of worries: Burst pipes. Water damage. The cost of repairs and hotel stays.

Though temperatures are rising and most Texans now have power back, a spiral of disasters born of the storm will be playing out for weeks to come.

A spokesperson for the Insurance Council of Texas has said the storm is “unprecedented” for the industry, and plumbers across the state have been hounded with requests for help. Harris County Judge Lina Hidalgo said the storm’s effects could be on par with a Category 5 hurricane. In Gov. Greg Abbott’s first press conference since the outages began, he warned homeowners to prepare for busted pipes that have drenched homes across the state.

“Get plumbers lined up,” he said, “and work with your insurance company in advance.”

Millions of Texans remain under boil-water notices. Cities across the state have said that water levels are dangerously low and may be unsafe to drink, in part because residents were advised to let their faucets drip to prevent pipes from bursting.

Sarah Habel hasn’t had to worry about her pipes. A power outage caused temperatures at her Austin apartment to plummet earlier this week. The Austin fire department knocked on her door Monday to tell her the apartment complex was on fire, possibly related to residents using fireplaces to keep warm.

Her family fled in the clothes they were wearing, her 10-year-old son barefoot.

She was able to return to the apartment to get clothes, and one of the family’s two cats. The other may still be trapped there.

She saw a “waterfall” pouring into her son’s room. The building didn’t have a roof.

The family moved to an Austin shelter for a night and then to a hotel that is being partially paid for by the Red Cross, Habel said. She is grateful because she knows others couldn’t find accommodations.

The family was told they’re not responsible for damages to their apartment unit, but now have to find somewhere else to live.

“They told us, ‘just consider it a total loss’” she said.

Habel expects her insurance will cover about $6,000 in temporary living expenses and $15,000 to replace their belongings. Her friends have started a GoFundMe fundraiser on the family’s behalf, which has raised several thousand dollars.

Friends and the community have stepped in to help while government officials and her building’s management have been largely absent, she said.

“I’m overwhelmed with the prospect of starting our lives over again from scratch,” she said. “I know there are thousands of Texans going through this right now. … How are thousands of us going to try to find a new place to live at the same time?”

A few miles away, Andrew Reimers’ apartment lost power and heat Monday. On Tuesday, a pipe burst or sprinkler system malfunctioned and sent water pouring through the ceiling of his kitchen and living room. Reimers raced to drag his belongings into the hallway. In the dark with no power, it was like a scene from a post-apocalyptic movie, he said.

With his building’s management offsite because of the icy conditions, Reimers was not sure when his unit will be dried, though he heard emergency maintenance workers were starting to go through to check for water damage Thursday.

“When the power finally comes back on I’m looking at the beginning of the process of my whole apartment having to be renovated,” he said.

Because of the pandemic, his office is closed; he had been working from an apartment which is now unusable. His insurance will cover $2,000 in temporary living expenses and $10,000 in property damage, he said.

For now, he’s “transient.” The power to his unit was restored, at least temporarily, Wednesday night.

Abbott has urged residents to contact their insurers and landlords and to save receipts in case federal assistance becomes available. He has requested a major disaster declaration that would let Texans apply for funding to repair damaged property.

He told homeowners they could turn off the water supply to their house to prevent damage from a pipe that might “suddenly start spewing water” as ice melts.

Thierry urged people to do the same but said it took two public works’ employees digging in her yard to find the valve to shut off her water; it’s not “something that your homeowner can do alone,” she said. She said she was sharing her experience to advocate for the Texans she represents who are in similar circumstances.

The Texas Department of Insurance, which did not respond to a request for comment, has posted tips like to take pictures of storm damage and to save receipts for short-term repairs and evacuation expenses.

Camille Garcia, a spokesperson for the Insurance Council of Texas, said Texas was already a high-risk state because of all the natural disasters the region faces, from hail storms to hurricanes. She expects to see hundreds of thousands of claims arise — not only for homeowners as pipes begin to unfreeze and break, but also renters, business owners and car owners.

Garcia said the claims process has already been expedited during the pandemic because of the increase of video meetings, which allow adjusters to see more people in a day than if they traveled door to door. She added that after the storm, companies will bring in people from out of state to supplement Texas’s base of catastrophe adjusters.

“This recovery process is going to take a long time,” Garcia said. “We’re used to regional events where … like when Hurricane Harvey hit, we had contractors from Dallas coming down and vice versa. Right now, the entire state is impacted. So all people resources — contractors, repair companies, plumbers — they’re really stretched to capacity.”

While some Texans have begun to wade through the cost of home repairs, others are still displaced — having fled to hotels to escape darkened or cold houses. Most said they are grateful to have found accommodations in quickly filling hotels, but were concerned about the accumulating expenses.

The financial worries come about a year after the start of a global pandemic that decimated many people’s incomes and claimed thousands of jobs. The storm has also displaced worries about maintaining social distancing for some desperate to find a place with heating or power.

In Killeen, Marline Fry and her husband and two children were able to find a room at a Hampton Inn, costing $140 a night, after the temperature in their home started dropping. They grabbed microwavable meals from Walmart and found a Chinese restaurant that was open for takeout. On Wednesday the water cut out until Thursday.

Fry makes a decent living as a licensed clinical social worker, but said she was still counting costs — subtracting each expense from the $8,000 tax refund she expects is coming. She thinks they’ll have to throw out all the perishable food at their home that has spoiled, and is hoping no pipes burst.

“I’m trying to push that out of my head as much as possible because right now I’m just concentrating on things like, ‘OK, is it time now to go and get some more snow to fill up the bathtub?’” she said Wednesday.

Her insurance company said it likely would not reimburse her for the hotel, but would cover damages to her house. The family returned home Friday and haven’t seen any burst pipes.

Margaret Mills, a graduate student who lives in a poorly insulated travel trailer in Lubbock, was initially hesitant to get a hotel room “because that money could be going to my food,” she said.

Starting Sunday night, she woke up every hour to check on the water she left dripping as temperatures dropped to below freezing. But when her alarm rang at 7 a.m. Monday nothing came out of the faucet. Her water pipes had frozen. It was the breaking point for her.

“It was a tough decision to make, but I realized I was just so uncomfortable this weekend that I couldn’t have made it and still focus on my classes,” said Mills, 24. “I just tried to find the most reasonably priced hotel” — a Comfort Suites that costs $62 or less a night.

Ashlee Hunter, a 21-year-old graduate student living in Houston, is concerned her electricity bills might go up — a prospect energy experts have said some residents could face. She can’t afford that, she said. She hasn’t been able to work as much as a tutor since school restarted, and she has had limited access to tap water —if any liquid comes out it’s brown. She’s spent part of the week driving around to get a stable cell signal to call her family in South Texas.

“I can’t afford anything else to happen right now, and I’m sure millions of people are in the same spot or even worse,” she said.

“I don’t have a lot of money to work with already. If any of my stuff gets ruined — I’m already thinking about the fact that I just lost over $100 worth of food in my freezer.”