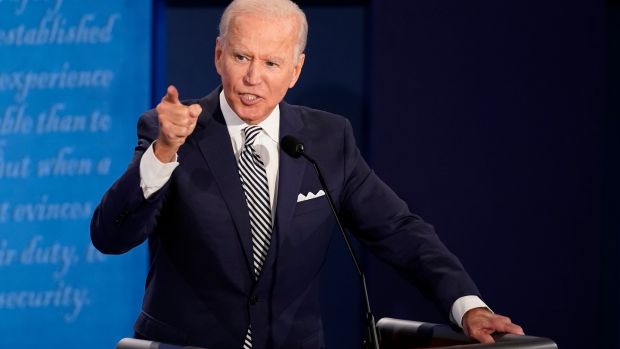 President Joe Biden is expected to announce a pledge Thursday to cut U.S. greenhouse gas emissions in half within less than a decade.

Biden will announce the aggressive pledge, according to multiple reports, the same day the White House hosts dozens of world leaders for a virtual climate summit. The pledge would commit the U.S. to lower its emissions by 50% from 2005 levels by the year 2030.

But critics were quick to point out flaws with the plan.

“Based on currently available technology, there is no way to halve America’s emissions in such a short period of time without radically impacting our battered economy,” said Heather Reams, executive director of Citizens for Responsible Energy Solutions. “We know that by 2030, 90% of all new emissions will come from the developing world and China, so we need solutions that can be adopted as readily in India as in Indiana.”

During the summit, which also falls on Earth Day, leaders will discuss a range of environmental and energy issues like coal power plants and carbon emissions.

Though Biden has not made the formal announcement, his rhetoric on the campaign trail indicated he plans to take an aggressive stance on environmental issues.

“As president, Biden will lead the world to address the climate emergency and lead through the power of example, by ensuring the U.S. achieves a 100% clean energy economy and net-zero emissions no later than 2050,” Biden’s climate plan released during the presidential campaign says.

“He will lead an effort to get every major country to ramp up the ambition of their domestic climate targets,” the plan adds.

Biden’s pledge could devastate parts of the country reliant on fossil fuels for their livelihood. Wyoming and West Virginia have the most significant coal producing capabilities, followed by Pennsylvania, Illinois and Kentucky. Those states produced about 500 million short tons of coal in 2019, more than 70% of the nation’s coal output. A short ton is equal to 2,000 pounds.

“Last year during the COVID pandemic, the U.S. cut its emissions by 12% and we all know at what cost,” said Daniel Turner, founder of the energy workers advocacy group Power the Future. “Thousands of small businesses have been closed forever. Unemployment skyrocketed. Entire industries like airlines, hospitality, tourism, have been bankrupted.”

Turner’s comments indicate the kind of opposition that Biden, and Democrats who support him, are likely to get from Republicans.

“The Biden-Harris administration’s reported second-round commitment under the unratified Paris climate treaty is preposterous and irresponsible,” said Myron Ebell, director of the Center on Energy & Environment for the Competitive Enterprise Institute. “Trying to cut greenhouse gas emissions by fifty percent below 2005 levels by 2030 would cause energy prices to skyrocket, make blackouts a common occurrence, and lead to widespread energy poverty. Luckily, the Biden-Harris commitment is merely an expression of intention and with no legal basis.”

Those jobs are often concentrated in certain pockets of the country, meaning a reduction in the fossil fuel industry could send entire cities and even regions into economic recession.

“[Biden] will make sure those commitments are transparent and enforceable, and stop countries from cheating by using America’s economic leverage and power of example,” Biden’s campaign pledge reads. “He will fully integrate climate change into our foreign policy and national security strategies, as well as our approach to trade.”

Those international relationships, though, are exactly what concerns many experts, who say China will use America’s restraint as an opportunity to gain an economic advantage.

“We will forgo our American, domestic, reliable, inexpensive, abundant energy to buy inferior Chinese products which are expensive and inefficient,” Turner said. “Meanwhile China continues to expand, build, grow it’s economy primarily through coal-fired plants and by expanding its production of oil and gas worldwide. China and Russia are thrilled that the American president is willing to punish his own country to achieve a globalist standard which they holistically ignore.”

Making public pledges to world leaders will grab headlines and earn favor with the Democratic base, but critics say it will do little to change the reality on the ground without help from Capitol Hill. Biden will need Congressional support to enact the widespread changes needed to make his ambitious promises come to fruition.

“We must count on widespread public opposition to convince enough Democrats in Congress to join with Republicans to defeat implementation of this grotesque power grab to cripple the American economy,” Ebell added.

Biden does have allies among Democrats who are eager to get a win for the party’s base.

Democrats on Tuesday re-introduced the Green New Deal ahead of Biden’s summit, pushing for a total reworking of the nation’s spending as well as the energy industry.

“Do we intend on sending a message to the Biden administration that we need to go bigger and bolder?” asked Rep. Alexandria Ocasio-Cortez, D-N.Y. “The answer is absolutely yes.”