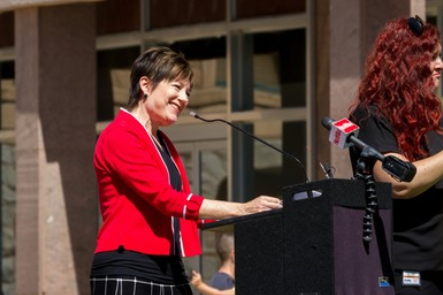 The Arizona Legislature has passed a sweeping reform to the state’s abortion laws.

The bill, which cleared the Arizona Legislature on Tuesday, makes numerous changes to the state’s legal code regarding abortive procedures, including granting state and federal rights to the unborn at any stage of development. Should the bill become law, performing an abortion because of a genetic abnormality of the child would constitute a class 6 felony, which carries a one-year prison sentence.

The measure gives the married father and grandparents of the unborn child the ability to bring a civil lawsuit on the child’s behalf.

The bill also gives exemptions to medical professionals and the mother of the child, including the abolition of a pre-Roe v. Wade law that criminalized abortions.

Democrats decried the legislation, saying it would turn doctors into criminals.

“This bill will clearly endanger the lives of women by making abortions harder to obtain for those women that need them,” Sen. Rebecca Rios, D-Phoenix, said in debate Tuesday. “This bill directly inserts government into the doctor-patient relationship.”

Others lamented the intrusion of government into the private lives of Arizonans.

“This is an attack on family values and family freedom by limiting when an individual and, potentially, a couple decides to terminate a pregnancy,” said Sen. Christine Marsh, D-Phoenix.

They predict the change would prompt legal challenges.

“Arizonans can be proud of SB 1457 sponsor, Senator Nancy Barto, and the other lawmakers who voted in favor of protecting the most vulnerable among us,” said Cathi Herrod, president of the Center for Arizona Policy. “They showed bravery and human decency in passing this important, life-affirming legislation.”

Barto’s legislation ground to a halt earlier this month when Sen. Tyler Pace, a Mesa Republican, joined Democrats in opposition to the bill. He said the proposal’s exemption Barto added to the ban because of severe fetal abnormalities would have left a gray area in the law, leaving a jury to decide on the legality of medical judgments. Several OB-GYN’s had testified against the bill stating similar concerns.