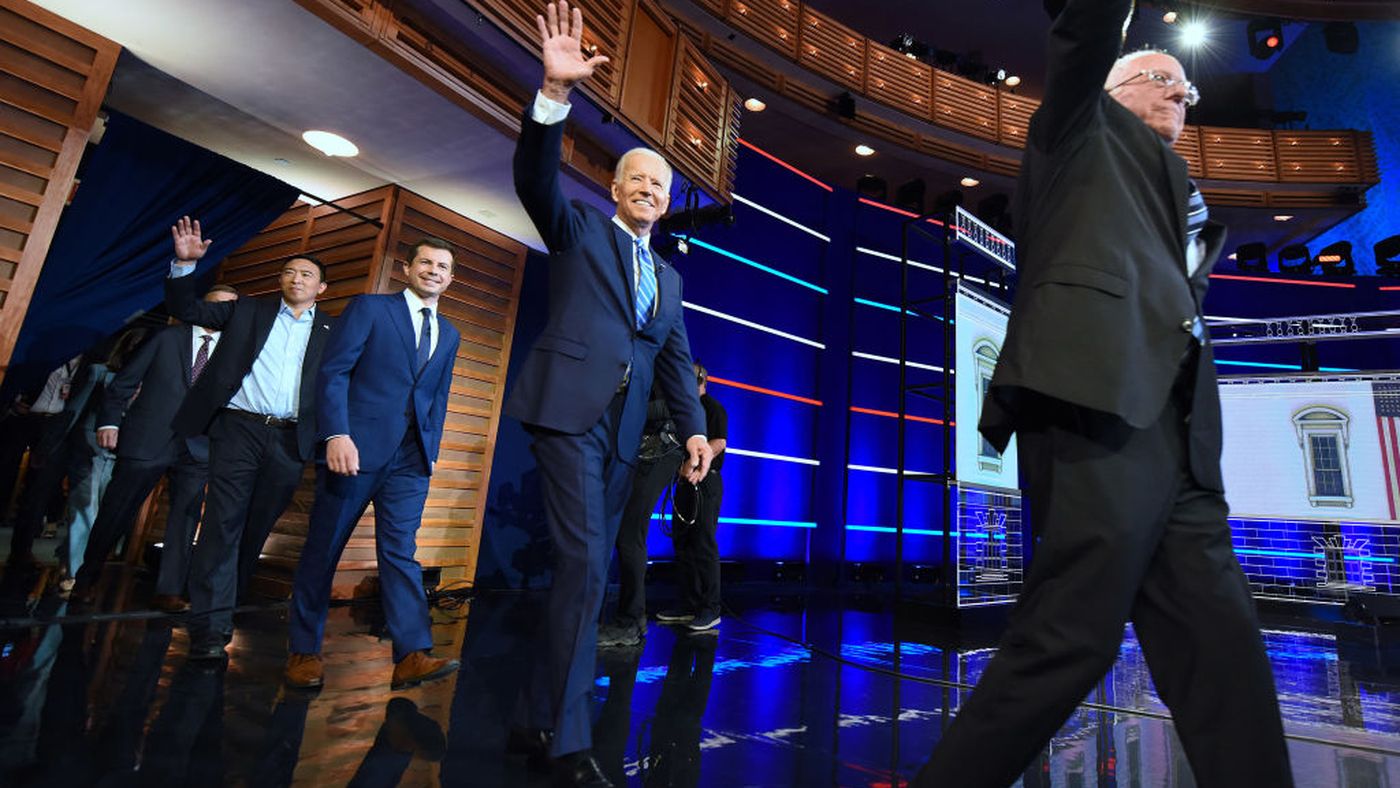 We asked every Democratic candidate for president about desegregating schools. Here’s what they told us.

When California Senator Kamala Harris challenged Joe Biden on his past opposition to school integration programs during a Democratic primary debate, she started a conversation few candidates seemed interested in having.

Although many of the 2020 field’s 25 Democratic candidates have put out some education policy ideas, few of them have emphasized integration. Harris, for her part, has focused on boosting teacher salaries and adding billions for teacher training.

The lack of emphasis on integration is not surprising, says Brett Gadsden, a Northwestern history professor who has written about three decades of school desegregation efforts in Delaware, including the role of former Vice President Biden.

“I think too often we are constructing him as a kind of anomaly in Democratic party politics in the 1970s forward, when I think there is a consensus among Democrats and liberals that school segregation is kind of a social fact,” he said. “No one has picked up the ball and attempted to advance a concerted challenge to that problem in American education today.”

So Chalkbeat asked the candidates where they stand on school desegregation and on the debate about busing. We compiled what they’ve said or done on the issue in the past, too.

Colorado Senator Michael Bennet told us that he believes busing for desegregation can be helpful, but isn’t sufficient. New Jersey Senator Cory Booker’s campaign said “we should consider every tool at our disposal” to desegregate schools. And a spokesperson for former Representative Beto O’Rourke said that he “absolutely believes that the federal government has a responsibility and a role to play” in desegregation efforts.

Few offered details, though. We’ve listed the candidates in the order of their recent national polling average, and included President Trump, too. We’ll update this if more candidates respond.

As a young senator in the 1970s, Biden vocally opposed court-mandated school desegregation programs. After facing criticism from Harris on the debate stage, Biden stood by his position at the Rainbow PUSH convention on Friday. He said he “never ever opposed voluntary busing.” On Sunday, his press secretary tweeted that Biden thinks other desegregation policies are more advantageous, “like rezoning school districts, putting public housing in white neighborhoods and combatting redlining.”

Biden’s education platform indicates he supports some integration efforts. “As President, Biden will reinstate Department of Education guidance that supported schools in legally pursuing desegregation strategies,” his website says. “And, he will provide grants to school districts to create plans and implement strategies to diversify their schools.”

Biden’s campaign did not respond to a request for comment from Chalkbeat.

In his education platform, Sanders said he would prioritize school desegregation. In particular, he’s promised “execute and enforce desegregation orders and appoint federal judges who will enforce the 1964 Civil Rights Act in school systems,” provide “federal funding for community-driven strategies to desegregate schools,” and end a prohibition on funding for busing for school integration.

But Sanders also recently told ABC News that busing to achieve school desegregation isn’t optimal. “Does anybody think it’s a good idea to put a kid on a bus, travel an hour to another school and to another neighborhood that he or she doesn’t know?”

Sanders’ campaign did not respond to a request for comment from Chalkbeat.

“I’m already on record on busing and using busing as a way to help communities that are diversifying,” Warren told reporters on Friday. She’s signed onto proposed Strength in Diversity Act, which would provide $120 million in grants to voluntary efforts aimed at increasing diversity in schools.

Warren’s campaign did not respond to a request for comment from Chalkbeat.

Harris is also a proponent (though not a cosponsor) of the proposed Strength in Diversity Act.

A handful of South Bend schools have been found out of compliance with a desegregation consent decree in recent years. As mayor, Buttigieg hasn’t taken up the issue of school segregation in his city, but he doesn’t control the schools.

Buttigieg’s campaign did not respond to a request for comment from Chalkbeat.

“Beto absolutely believes that the federal government has a responsibility and a role to play in desegregating our communities,” O’Rourke’s campaign told Chalkbeat. “As president, he would reinvigorate the work of the Office of Civil Rights at the Department of Education and the Department of Justice to investigate racial disparities and promote efforts to integrate our schools and communities.”

“At a time of increasing segregation of schools, we should consider every tool at our disposal — including busing — to support desegregation and ensure equal opportunity for all kids,” Booker’s campaign told Chalkbeat.

Gabbard’s campaign did not respond to a request for comment from Chalkbeat.

Yang’s campaign did not respond to a request for comment from Chalkbeat.

The presidential hopeful would “fulfill the promise of Brown v. Board of Education through a progressive housing policy that includes affirmatively furthering fair housing, implementing zoning reform, and expanding affordable housing in high opportunity areas. These efforts will reduce racial segregation in classrooms,” his website says.

Castro’s campaign did not respond to a request for comment from Chalkbeat.

In March, the Minnesota senator said, “I think desegregation of schools is very important.”

Klobuchar’s campaign did not respond to a request for comment from Chalkbeat.

After the debate on Thursday, the New York senator told reporters she supports busing for school integregration: “I think every child should be able to go to a good public school. And as president I will assure that. If it needs busing, it needs busing.”

Gillibrand’s campaign did not respond to a request for comment from Chalkbeat.

Segregation has been a big issue in New York City’s school system, which de Blasio controls. De Blasio has also pushed for changes in admissions policies to the city’s selective high schools to include more black and Hispanic students, but that’s largely in the hands of the state legislature. His schools chancellor has made integration a key talking point. But while de Blasio is on the presidential campaign, some youth activists in the city are arguing that he hasn’t done nearly enough to desegregate schools. In 2018, he said he didn’t think busing for school integration is “the right way to achieve the goal.”

“As a former urban school superintendent, let me first note that right now our education system is reinforcing inequality, instead of liberating kids from it. When cities and states aren’t ensuring equal access to quality education, then the federal government has a civil rights responsibility to address that inequality. Busing can help ensure that kids in every community and every neighborhood can benefit from a great education, but it isn’t sufficient by itself. From instituting universal preschool, to raising teacher pay, to building more affordable housing in neighborhoods with great schools, to addressing funding inequities across schools, we need to do much more to prepare every child in the next generation for success,” Bennet told Chalkbeat in a statement.

“If we are going to start tackling the big, systemic problems we have today, we need to start by offering big solutions, like busing was back then, and do so fearlessly, rather than continue to offer up the same failed talking points that ring hollow with the American people and do nothing to address the anxiety that people have about their lives and the state of the nation,” Ryan told Chalkbeat in a statement.

Hickenlooper’s campaign did not respond to a request for comment from Chalkbeat.

“Gov. Jay Inslee supports recommitting the federal government to integration of our schools by doubling funding for the federal Magnet Schools Assistance Program to support magnet schools that integrate students, eliminating rules that penalize districts for efforts to desegregate through use of Title I funds, and removing the last vestiges of anti-integration riders from the appropriations process that prevent school districts integrating districts using school transportation,” an Inslee spokesperson told Chalkbeat.

“Mike had one vote early in his career against school busing, then went on to vote in favor of it consistently,” a Gravel spokesperson told Chalkbeat. “The position on busing was that, in the long term we can’t externalize good schooling away from the neighborhoods where children live, but in the meantime children still needed to be educated, and the way the system had been set up better education was doled out on racial lines. Mike was a cosponsor on S.210 in the 96th Congress which established a federal Department of Education. Part of its mandate was civil rights which included desegregation efforts. Ultimately we know now that these efforts ‘failed’ in the sense that, once they were stopped, de facto segregation started flourishing again, despite them often being effective when they were in place.”

“Segregated schools were and are wrong where they existed in the past or even today. However, along with segregation was and still remains the vast disparity in school facilities, technology and other education resources,” Messam told Chalkbeat in a statement. “Busing cannot be deemed the solution to cure this issue. We must appropriately fund schools in these underserved communities. Busing kids away from bad schools doesn’t solve the underlying issue.”

“I believe that busing has been and can be a very useful tool for desegregation,” Sestak told Chalkbeat. “I also believe that the best way, over the long term, to achieve broader levels of integration in our schools is to tackle broader issues of injustice in society. When we improve social mobility — such as through universal healthcare, broader access to small business development assistance, fairer housing policy, criminal justice reform, and of course dealing with entrenched discrimination and racism in society — we will reduce segregation at the community level, which will ultimately mean more integrated schools as well.”

“Successfully desegregating schools requires immediate efforts by the federal government, which has a central responsibility to ensure equality for all Americans,” Swalwell told Chalkbeat in a statement. “Tools like busing have proven to successfully desegregate schools in communities across America, and we should use them to address this issue. In resolving school desegregation, no option is off the table.”

“I support measures within the Strength in Diversity Act, legislation being considered by Congress that would promote school diversity initiatives, including expanding busing services,” Williamson told Chalkbeat in a statement. “My goal is to make every public school a palace for learning, no matter the zip code or location.”

In response to a question about “busing,” Trump did not appear to understand the connection to school integration, instead focusing on busing solely as a means for transportation.

“Well, it has been something that they’ve done for a long period of time. I mean, you know, there aren’t that many ways you’re going to get people to schools. So this is something that’s been done. In some cases, it’s been done with a hammer instead of velvet glove. And, you know, that’s part of it,” Trump said.

Trump’s administration has not prioritized integration efforts. In fact, his Department of Education scrapped Obama-era guidance that spelled out instances where school districts could consider race in efforts to integrate schools.

The article was published at We asked every Democratic candidate for president about desegregating schools. Here’s what they told us.