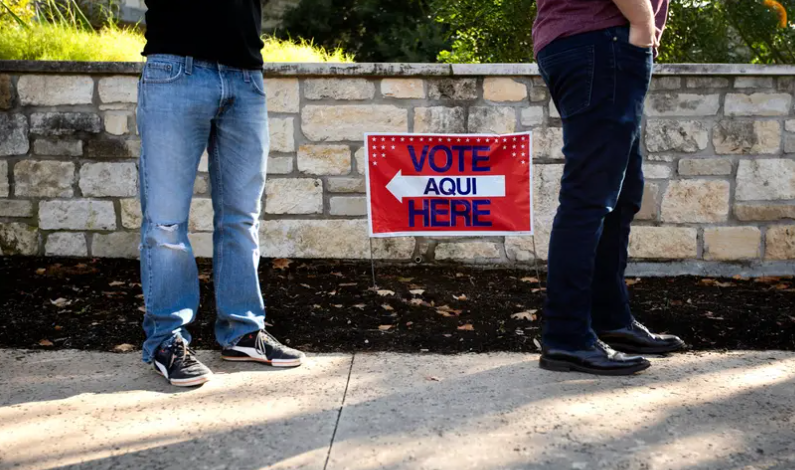 “Texas is on track for record turnout in this election after breaking early voting records” was first published by The Texas Tribune, a nonprofit, nonpartisan media organization that informs Texans — and engages with them — about public policy, politics, government and statewide issues.

After the conclusion of three weeks of early voting, 9.7 million Texans have cast ballots, crushing previous early voting totals in the state and setting Texas on a course for record turnout in this Tuesday’s general election.

At least 9,718,648 voters cast early ballots, according to preliminary final numbers released by the Texas Secretary of State on Sunday. That is 57.3% percent of registered voters, just shy of the overall turnout of 59.4% in 2016 by 2 percentage points.

Early voting, which Gov. Abbott extended by six days this year because of the coronavirus pandemic, has already eclipsed total votes during the 2016 general election, when 8,969,226 Texans voted.

Mark Jones, a political science professor at Rice University, said he expects Election Day totals to push the state’s final vote count further into record breaking territory — as high as 12 or 12.5 million. Such a grand total would bring the Texas turnout percentage beyond 70%, a new high in the modern era.

Jones said the state’s 2020 turnout percentage will “probably take us out of the doldrums, where Texas has been regularly and to at least into the middle of the pack nationally.”

That would continue a more recent trend. Voter turnout as a percentage of voting-eligible population in the 2018 Texas midterm elections increased by 18 percentage points compared with the previous midterms, the country’s sixth-highest increase. In Texas, 46.3 percent voted in 2018. Nationwide, turnout was 50.1 percent.

One driver of increased turnout has been the high numbers in the state’s most populous counties, such as Harris County, where more than 1.4 million people have already voted, compared to 1.34 million including Election Day in 2016.

County officials there have worked to increase early voting participation, providing 24-hour polling centers on the last night of early voting, as well as an option for drive-through voting, which more than 117,000 county residents took advantage of. Republicans have challenged the legality of the drive-thru ballots. After initially rejecting a challenge last week, the Texas Supreme Court on Friday asked the county to respond to a subsequent petition seeking to invalidate the drive-through votes.

A Texas Tribune analysis has found that the counties that are home to Texas’ four biggest cities — Houston’s Harris County, San Antonio’s Bexar County, Dallas County and Austin’s Travis County — saw an increase of 630,796 registered voters since 2016, according to data collected by the Texas secretary of state.

Those cities tend to provide Democrat majorities, and high early voting totals mean that Biden could enjoy an initial lead when early voting results are announced Tuesday night, Jones said. Depending on how high the lead is, Republicans may need “exceptionally high” Election Day turnout to win, he added.

The Tribune’s analysis shows that counties in reliably red territory outside of major metro and suburban counties have gained 522,972 registered voters since 2016.

But while some of those traditionally Republican counties also saw high early turnout, many are behind the statewide turnout. A University of Texas/Texas Tribune Poll in October found that Republicans were more likely than Democrats to vote in-person on Election Day.

Democratic officials struck a tone of guarded optimism on Saturday. “Texas Democrats feel confident where we’re at but know that we still have a lot of work left to be done,” said Manny Garcia, the executive director of the Texas Democratic Party, in a statement. “Texans are demanding change.”

The Texas GOP did not respond to a request for comment Saturday.

High turnout this year also reflects the increasingly competitive nature of Texas politics, where a Democrat has not won a statewide race in more than two decades.

In addition to the tightly contested presidential election, Texas’s senate race is a close battle between Republican incumbent John Cornyn and Democratic challenger MJ Hegar, and the state also features dozens of close legislative and congressional races. Democrats are hoping to flip the Texas House, and as many as 12 congressional seats are being seriously contested.