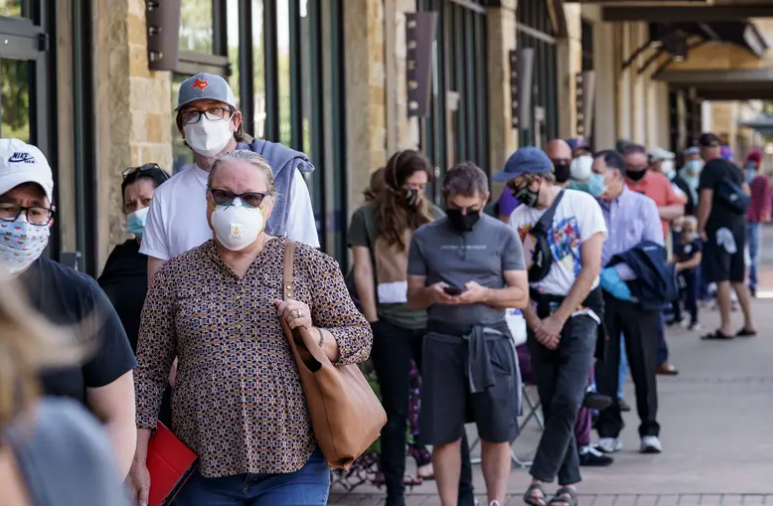 Texas has added 1.8 million registered voters. Where they are shows how the state has become more competitive.

“Texas has added 1.8 million registered voters. Where they are shows how the state has become more competitive.” was first published by The Texas Tribune, a nonprofit, nonpartisan media organization that informs Texans — and engages with them — about public policy, politics, government and statewide issues.

It’s clear from the state’s early voting numbers that a lot of new voters have cast ballots this year. Total raw turnout during the early voting period has already surpassed 9 million, which is more than the total number of voters from 2016.

Some of that turnout can be credited to an excited electorate. But it’s also thanks to a surge of 1.8 million new registered voters since the 2016 election. When all the votes are counted, experts say, the state’s percentage of registered voters who cast ballots will likely surpass 60% for the first time since the early 1990s.

The high number of early votes comes during an unusually competitive election season for Texas. Polls indicate that the presidential race between President Donald Trump and Joe Biden is tight, with some national prognosticators calling it a “toss-up.” Democrats are hoping to flip the Texas House, and as many as 12 congressional seats are being seriously contested.

It’s hard to say what this turnout means electorally. Texas doesn’t collect party affiliation when it registers voters. We simply don’t know who these new voters will vote for.

But we can look at where those new voters are. To analyze this, we broke the state’s 254 counties into four groups. It’s an imperfect measure — there are Republicans in big cities and Democrats in small towns, and each county has its unique politics. But looking at where the new registered voters are can help us understand how the balance of voting power is subtly shifting in the state. Here are our four categories:

Four big blue cities: The counties that are home to Texas’ four biggest cities — Houston’s Harris County, San Antonio’s Bexar County, Dallas County and Austin’s Travis County — are generally considered reliably Democrat. In 2016, Hillary Clinton defeated Trump in these counties, 57.4% to 37.6%. These areas are also adding the most new voters. Since 2016, they saw an increase of 630,796 registered voters, according to data collected by the Texas secretary of state.

Six fast-changing counties: Just outside those big cities are the fast-changing suburbs. Over the past several election cycles, these areas of the state have been slipping away from Republicans’ grip. In 2016, Fort Bend County flipped blue. In 2018, Williamson and Hays voted Democrat. Collin County and Denton County have remained red — but some believe they may be in play for Democrats in 2020.

Tarrant County is our sixth county in this list. It’s home to the big city Fort Worth but has followed similar voting trends — and flipped Democratic in 2018.

This list does omit some suburban counties that have remained red. The biggest is Montgomery County, north of Houston. There, about 58,000 more Texans are registered to vote than in 2016, and voters supported both Trump and Cruz by more than 45-point margins.

Twenty-eight border counties: The Democrats’ other area of strength in Texas isn’t seeing the same kind of raw growth in voters. This is in part because there are simply not as many people there as in the other categories. In 28 counties along or near the Texas-Mexico border, only 18 have had a net increase in registered voters since 2016. And turnout in early voting has been below the statewide turnout.

Most, but not all, of those counties lean Democratic. This is a heavily Hispanic area, and recent polls have suggested that while Hispanic voters are more likely to support Biden over Trump, they might not at the same rate as they supported Clinton in 2016. Combined, the counties added about 167,566 registered voters since 2016.

The red wall: Former Texas Gov. Rick Perry would call the remaining 216 counties the tomato soup of Texas. While the other counties make up spots of blue on the map (Perry would call them blueberries in the soup), the rest of the vast geography of the state is heavily Republican. These areas include Montgomery County, midsized cities like Amarillo and Waco, and sparsely populated rural areas. They have gained 522,972 registered voters in total and show no sign of turning blue. (One exception: Beaumont’s Jefferson County, which is more than half Black and Hispanic and went for O’Rourke in 2018.) If Texas stays Republican, these will be the areas that will have propped the party up.

Some of these traditionally Republican counties, too, are seeing high early turnout, but most are behind the statewide turnout. This could be more the result of voter habits rather than enthusiasm, however. A University of Texas/Texas Tribune Poll in October found that Republicans were more likely than Democrats to vote in-person on Election Day.

The ways these regions have changed and grown over the past four years is a big reason that people believe Texas is a more competitive state this year. As the big cities add more people and the suburbs keep growing and turn more purple, the GOP’s dominance elsewhere is dampened. Will it be enough for a Democrat to win the state? Trump won Texas by just over 800,000 in 2016, which means there is a lot of ground for Biden to make up. The results hinge on how many of these new voters show up — and who they choose to support.

This article was originally published on Texas has added 1.8 million registered voters. Where they are shows how the state has become more competitive.