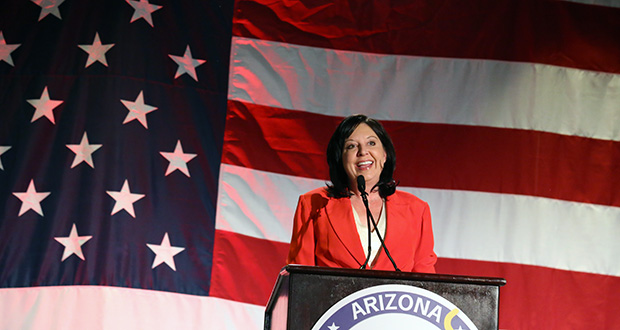 PHOENIX — Secretary of State Michele Reagan has begun circulating a memo detailing a proposed overhaul of the laws governing virtually every aspect of how elections are conducted in Arizona, from data protocols and recount procedures, to “sore loser” candidates and voter fraud investigations.

Matt Roberts, a spokesman for Reagan’s office, said the proposal only begins the conversation about ways election practices can be improved. Roberts said there are two main motivations to Reagan’s proposition: digitizing records and processes, and fixing issues that have come up in recent years.

Parts of the proposal, such as requiring counties to report election data in uniform formats, would lead to faster and more detailed results for the public on election night, Roberts said.

Provisions addressing things like voter registration deadlines falling on holidays, or scrapping the requirement for counties to consolidate polling places during the presidential primary election come straight from problems in 2016.

But some county elections officials are wary. Pima County Recorder F. Ann Rodriguez said the plan lacks detail now, and she has concerns about what she’s seen.

“These are very aggressive changes,” she said.

Specifically, Rodriguez said she sees some of the proposals as taking authority away from county election officials, like her, who are charged with executing elections.

And where the Secretary of State’s Office sees places to increase uniformity, such as with the election results, or another section proposing digital signature verification requirements, Rodriguez said she’s suspicious that the costs for doing so would end up being borne by the largest counties in the state, Maricopa and Pima.

When she asked questions about costs during a meeting with secretary of state staff, Rodriguez said she didn’t get clear answers.

“I don’t know if they’ve got a pot of gold somewhere,” Rodriguez said.

Roberts said the Secretary of State’s Office is seeking to strike a balance between costs and improvements to the systems shared by them.

“Some folks would argue that, when it comes to statewide uniformity, voters have a desire for real-time, real results that are uniform from each county,” Roberts said. “Neither Secretary Reagan nor this office wants to pass down costs to the counties without a good reason for those costs. We’ll be looking forward to having those discussions.”

Roberts said the memo is only the beginning of the process of rewriting state election laws, and that specific provisions will become clearer as a bill is formally drafted.

This effort won’t be Reagan’s first time reworking a major portion of the state’s election laws: Last year, her office led an effort to completely rewrite the state’s campaign finance laws, sparking a legislative brawl over “dark money.” The legislation, SB1516, was approved and became law just after the November 2016 election.