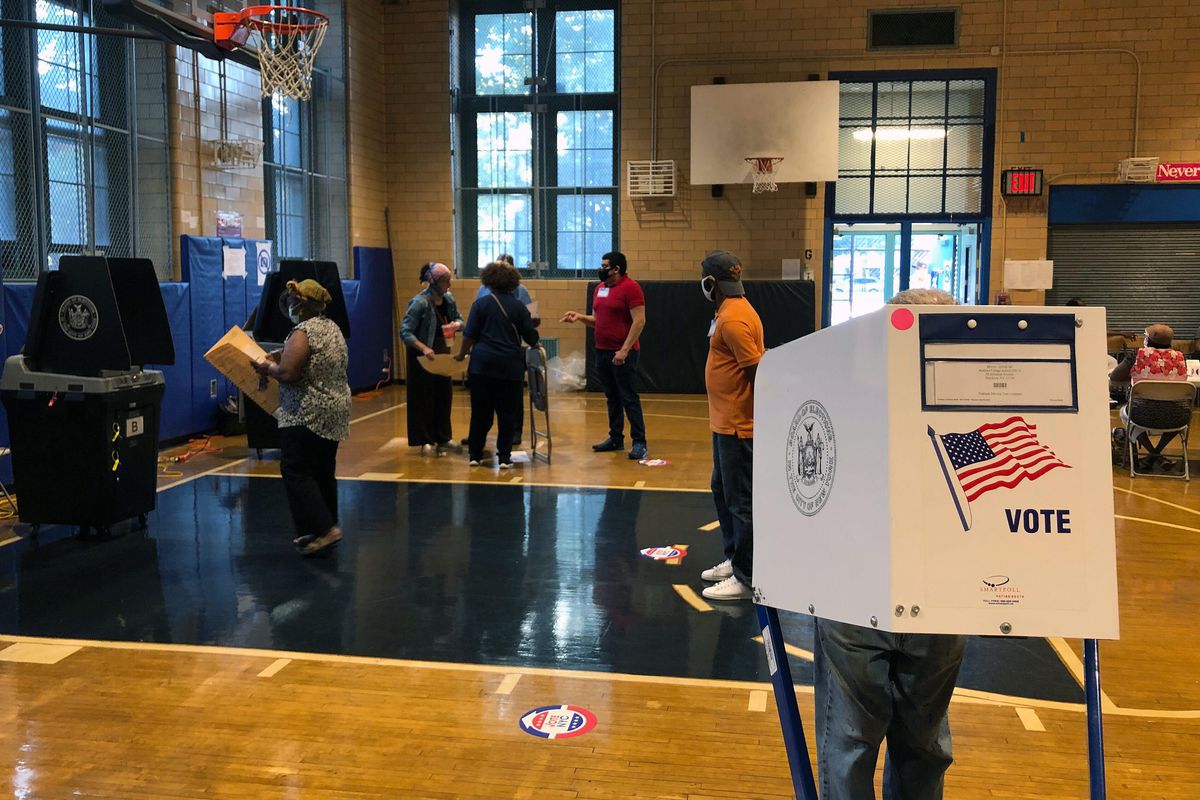 On social media, dozens of voters reported receiving just one ballot out of two — either for the presidential primary or their local state and congressional primary, but not both.

Some voters described long lines and frustration as poll workers scrambled to troubleshoot issues such as malfunctioning scanners.

Others, who were among the record numbers who requested mail-in ballots to avoid the polls during the coronavirus pandemic, said they never got a paper ballot.

At JHS 190 in Forest Hills, Queens, poll watchers and workers reported a confluence of confusing voting issues — including electronic voting machines that arrived uncharged, election district tables that had mismatched ballot sheets and poll workers who appeared to be ill-informed about the multiple ballots in play.

“Some people just got the presidential one, others just got the local,” said Alisa Tippie, who had been watching the poll site since 6 a.m. this morning for Rep. Grace Meng’s campaign. “Another person too — they’d given him the wrong sheet that wasn’t even meant to be given to Democrats.”

Tippie added that she was very concerned “how little information is passed down to poll workers.”

A 27-year-old poll worker at JHS 190 who has worked elections since 2012 described “just a complete communication breakdown.”

“Never had problems like this until today. It’s just one after the other,” said the poll worker, who spoke on the condition of anonymity.

The confusion came even after early in-person voting, which ran from June 13 to June 21.

Reported problems included workers not being able to set up the machines in time; not being told in advance that they’d need to distribute multiple ballots and not enough workers to help voters.

Of those 13 poll sites, two were missing Chinese-language (Mandarin or Cantonese) interpreters.

“This is definitely the biggest issue I’ve seen so far,” he said in between visits. “And listen, we’re talking about the Lower East Side. This is a primarily Latino district, it’s a diverse district. It’s unacceptable.”

In Williamsburg, Kristina Naplatarski, who is running for female district leader in the 50th Assembly District, was electioneering outside Cooper Park when multiple voters leaving the polling site told her that she was not on their ballot. They said they were only given one ballot, for the presidential primary, already locked up by Joe Biden.

Naplatarski intervened and spent “about 20 minutes” helping poll workers find the box with the state legislative primary ballots. “Then, indeed, they started giving them out,” she said.

“Systematically, it looks like there wasn’t any general training and like it was very difficult for the staff to get instructions from the Board of Elections,” Naplatarski added.

In nearby Bushwick, one primary voter at PS 120 who declined to be named was handed three ballots: two copies of the presidential primary ballot and one for the local election.

Asked about the irregularities, a spokesperson for the Board of Elections said shortly before 11 a.m. Tuesday that information about poll site incidents was not yet available — and wouldn’t be until after the election.

In Flatbush, voters were forced to wait on line as poll workers scrambled to address problems at their polling sites.

Connor Jennings said he and about a dozen others lingered for an hour at MS 246 in Flatbush as staff struggled to get scanners up and running. Voters were eventually given two options: keep waiting until the issue was resolved, or sign an affidavit ballot.

Jennings waited for a while, he said, until deciding to return to the polling site later. “I figured I’d go back in a few hours and see if things have been fixed,” he said, adding that one staffer suggested he report the issue directly to the BOE.

The irregularities extend to those who voted by mail under a special absentee ballot distribution arranged by the governor — or attempted to.

In Gowanus, Brooklyn, Teddy Gage and his wife waited in vain for more than two weeks to receive their absentee ballots. With no one to watch over their children, and still on edge about the health risks related to the COVID-19 pandemic, the couple decided to skip the election, he told THE CITY.

Rockaway voter Elizabeth Hudec, 38, said she felt obligated to vote in-person Tuesday because her absentee ballot did not arrive in the mail until yesterday. “I had to make time for it,” she said. “It’s obviously super important. I hope that people who didn’t get their absentees still go, because I know there was a backlog.”

So long as voters get their envelopes postmarked June 23, they can still mail absentee ballots, under an extension ordered by Gov. Andrew Cuomo. But compounding the confusion, the envelopes absentee voters received in the mail are printed with a different message: “must be received by the Board of Elections not later than 9 p.m. on June 23.”

The application available online on the city Board of Elections website also notes that ballots must be mailed prior to Election Day.

Valerie Vasquez, a spokesperson for the city Board of Elections, said that the mixed messaging was due to the timing of Cuomo’s June order, “after the envelopes and instructions” had already been printed and mailed.

Claire Hackett, 28, of Fort Greene, said that when she attempted to drop off her absentee ballot at PS 20 in Fort Greene Tuesday, she was instructed that they wouldn’t accept her ballot.

She was told that her ballot was supposed to have been received by the Board of Elections Monday. When she called the board, the phone line rang endlessly. She ended up casting her vote in person.

“It was the information given out by the BOE that was not reliable,” Hackett said.

“I’m really concerned that a ton of people are trying to mail their ballots today and it seemed like those wouldn’t be counted.”

After some delays, Steven Schechter’s family finally received their absentee ballots Monday night. He set out to drop them off at their Cobble Hill, Brooklyn, poll site Tuesday morning, following BOE website instructions. But once there, he said, an on-duty clerk expressed doubts about what to do with the ballots.

“I left the ballots with her but have no confidence that they will be delivered to the BOE or counted,” he said.

It’s been four days since the city Board of Elections has updated the number of absentee ballots mailed. On June 19, it reported that more than 29,000 ballots, or about 4% of the total requested, had still not been sent to voters.

In Bushwick, Eva Sotomayor received a mailer Monday night informing her that her polling site had changed location. She had already voted by mail. “I’ve lived here for three years,” she said, “and have always voted in the same place.”

The article was published at Primary Marred by Missing Ballots and Busted Machines, Voters Say